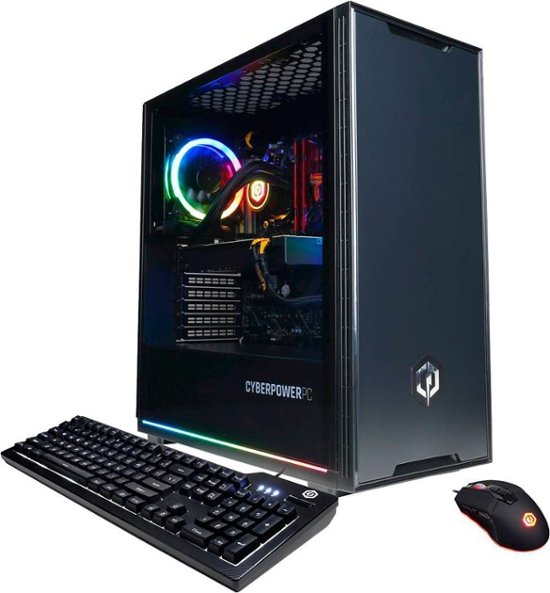 Momus posted this deal. Say thanks!
Add Comment
Reply
in Desktop Computers (3)
If you purchase something through a post on our site, Slickdeals may get a small share of the sale.

1
Reply
This comment has been rated as unhelpful by Slickdeals users
Joined Jun 2005
L8: Grand Teacher
3,130 Posts
1,989 Reputation
Our community has rated this post as helpful. If you agree, why not thank ?
07-02-2021 at 06:21 AM #3
This isn't too bad considering availability and if you weren't necessarily waiting around for best prices on components.

Or if you were looking for a whole open the box and go computer.

0
Reply
This comment has been rated as unhelpful by Slickdeals users
Joined Mar 2011
L3: Novice
177 Posts
38 Reputation
07-02-2021 at 07:05 AM #5
I ordered one too. Gonna pair it with the CRG9 I got on Prime Day and run some Cyberpunk and Flight Simulator in superultrawide.

A little concerned about build quality from reviews and some Cyberpower unboxing videos online, going to make a list of things to check. Buying this instead of building my own from scratch, but plan to turn this into a ship of Theseus situation over time.

0
Reply
This comment has been rated as unhelpful by Slickdeals users
Joined Mar 2011
L3: Novice
177 Posts
38 Reputation
07-02-2021 at 07:14 AM #6
I'd have been building from scratch for the first time, so my main concern was having one component DOA and not having other components handy to swap in to troubleshoot. I figure even if this isn't built to the same spec I would have picked at least I can have a single point of contact if any single thing doesn't work.

I'll also have something set up and ready when deals come along for all the things I will probably eventually upgrade.

So this ended up being $2360.61 after all is said and done. I'm still trying to determine if it's worth it.

1
Reply
Last edited by They-call-me-Nobody July 2, 2021 at 11:18 AM.
This comment has been rated as unhelpful by Slickdeals users
Joined Jun 2013
L4: Apprentice
394 Posts
200 Reputation
07-02-2021 at 11:01 AM #12
I read a post that stated CyberPowerPC support is way better if you order from them directly. I just purchased https://www.cyberpowerpc.com/syst...finity-XLC from them simply because I only want the better customer service. Hope that was the right choice

07-02-2021 at 11:01 AM #13
These have been coming in and out of stock for the past month. I ordered the intel version with my birthday discount and then changed my mind and ordered the amd. Best Buy wouldn't honor the discount so I ended up returning the AMD.

The intel one also had some scratches on the case and a dent on the top. The box wasn't sealed that well so I expect it was a return. They gave me another 10% off.

I would recommend reversing the front two fans for intake. By default they come as exhaust. Probably for esthetics. On the intel the 120mm aio wasn't cooling the cpu enough and was thermal throttling. If you decide to add a bigger AIO a 360 won't fit because there isn't enough clearance with the cables going to the motherboard. I'm guessing they use cheap thermal grease. I went with noctua and the temp dropped from maxing out at 100 to 88C.

The AMD came pretty much as the OP listed it with a gigabyte 3080. The intel had an EVGA. Overall they are pretty darn fast computers and benchmark very high. The AMD benchmarked better than the Intel which is a known fact.

3
Reply
This comment has been rated as unhelpful by Slickdeals users
Joined Feb 2021
L3: Novice
211 Posts
30 Reputation
07-02-2021 at 11:13 AM #15
Good luck getting approved though. I went into a branch with two pre-approval emails in hand, a FICO score of 770 (this is the score they used), and a good history with Chase (two accounts in good standing for multiple years). I still got denied.