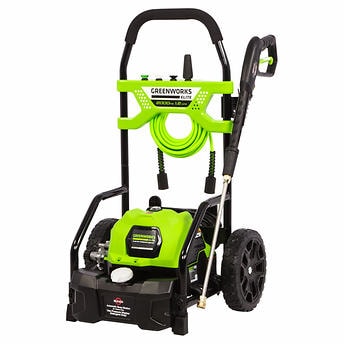 spyder2799 posted this deal. Say thanks!
Add Comment
Reply
in Garden & Outdoor Tools (5) Get Costco Wholesale Coupons
If you purchase something through a post on our site, Slickdeals may get a small share of the sale.

Anyone knows what's the difference? I find it surprising that Costo's reg price os 50$ more than Lowes. I know Costco has better warranty, but still.

0
Reply
This comment has been rated as unhelpful by Slickdeals users
Joined Jan 2006
L9: Master
4,610 Posts
1,252 Reputation
07-29-2021 at 11:12 AM #7
Not sure about the Lowes model. Even if "specs" are the same, pump and motor configuration looks quite a bit different. I would "guess" that the Costco model appears to be heavier-duty but that's just from the way the base power unit looks heavier and larger. Keep in mind that's it's easy to make specs look good but sometimes a lighter duty unit can still get listed by the manufacturer at the same specs. I'd certainly go for the Costco one mostly because of that. The other one "looks" like a unit you'd often find for $150. The Costco one looked actually serious enough that I might order one -- going "down" from a big Honda-powered gas one that worked well but now has gas-engine issues after about 10 years, and honestly was too much power for most household tasks.

EDIT2: So the Lowe's version is listed as $199 retail on Greenworks site, but currently 10% off for $179. Lowes seems to just list it at $149, so probably not a bad deal if you can just get it locally at a Lowes. It does look like different design in the motor/pump assy, not sure if one is never or perhaps different factory in China.

EDIT4: The Costco model # doesn't show up on Greenworks site, which is normal because Costco almost always gets special packaging/model# for stuff they sell. There are over 4000 reviews on the Costco site, so they have sold that model for a while. It might be an older but well-reviewed unit, maybe being discontinued as for Costco it is already planning for Fall/Winter season.

Greenworks does list a "New" Brushless line that looks pretty nice (yes, AC-powered, but brushless motors in general means more efficient and you can get better amount of power for same input amps, and input amps don't go past 14A on these, so it can work on a household 15A circuit). This one looks nice but $249 retail. [greenworkstools.com]

This comment has been rated as unhelpful by Slickdeals users
Joined Jul 2011
L3: Novice
293 Posts
60 Reputation
07-29-2021 at 01:46 PM #9
Might anyone know if the end of the sprayer has a standard tip I could attach an extension to, to reach greater heights?

07-30-2021 at 12:04 AM #10
Pretty crummy specs. Most of the Sun Joe electric pressure washers have the same PSI and significantly more flow rate for similar or cheaper pricing (check their refurbished stuff on eBay). Pressure determines what you can clean, while flow rate determines how fast it does it.

0
Reply
This comment has been rated as unhelpful by Slickdeals users
Joined Jan 2006
L9: Master
4,610 Posts
1,252 Reputation
08-01-2021 at 11:07 AM #15
That's the thing -- you can't compare for sure unless you have both in front of you. But probably almost the same. The Lowe's Specs page has a box that says "Lowes Exclusive" which means it's a special number boxed for them. Similarly, Costco often has manufacturers make different packaging and model# for them. Sometimes they are 100% identical, or sometimes one might come with some extra feature or accessory -- more nozzles, longer hose, etc. However, the Costco one in this original deal clearly looks different from the photo, but has essentially the same specs. The Lowes one has oldest review listed as 2019, so that means it's been at Lowes for at least 2 years. Not sure if the Costco model is maybe a newer model, or just different-looking.