Thanks to community member StrongDolphin812 for finding this deal. 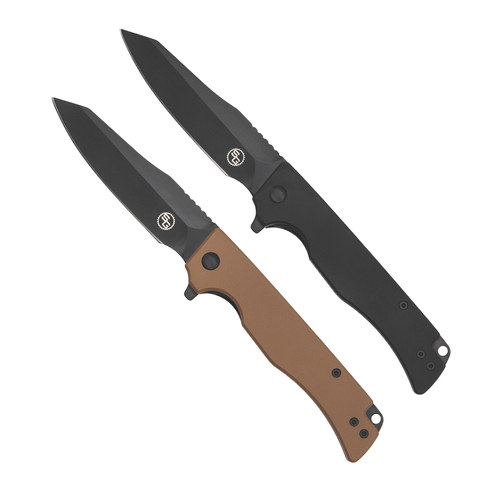 StrongDolphin812 posted this deal. Say thanks!

Got one of these off their original Kickstarter and have been super pleased. Really sharp blade with smooth deployment and solid lockup.

5
Reply
This comment has been rated as unhelpful by Slickdeals users
Joined Dec 2010
L1: Learner
24 Posts
10 Reputation
02-09-2022 at 08:23 PM #32
FWIW, i believe this blade started on a kickstarter campaign - 5 bucks cheaper with this deal then the early bird special on kickstarter

1
Reply
This comment has been rated as unhelpful by Slickdeals users
Joined Jan 2013
L3: Novice
206 Posts
87 Reputation
02-09-2022 at 11:32 PM #34
What did you not like about the original one? I have the original one as well and I like it. I also have two of their Ledge slipjoints and they've been serving me very well as well.

Ganzo Firebird FH41 [powercutlery.com] is one of my favorite knives for the money, but it has a more traditional drop point blade. I don't think they offer anything with a reverse tanto blade, but they have a bunch of nice designs in D2 starting out at $24. [powercutlery.com] And the Ganzo D2 steel has been tested byLuvThemKnives on YouTube [youtu.be] to have a 62+HRC Rockwell hardness.

I like the reverse tanto of this Ausus and I'll admit I've never even seen or held one. $25 isn't much to risk even though the Ausus does get mixed reviews. But I've absolutely loved the four different Ganzo Firebird knives I've owned, and, IMHO, it's about the best $25 knife on the market unless you need the added corrosion resistance of true stainless steel.

Shoot, buy both. One knife is never enough. And, I am aware this isn't the first time I've recommended Ganzo Firebird in various knife threads, but that's how much I love them in D2 at the $25 price point.

I have no first hand experience with the StatGear Ausus knives. The reviews I've reviewed haven't been that great. IMHO, you'll be much happier and get a better quality knife for $25 if you go with a Chinese made Ganzo Firebird. If you want something as good as one of those in a USA made flipper, then you will have to pretty much double your budget.

A lot of folks love the USA made Kershaws but now we are talking more like $60, so you could wait on a sale, but you'll be hard pressed to find one for $25. KershawGuy.com sells factory blems of many USA Kershaw models for around $40.

Sorry, but in the $25 price range your best deals will be Chinese made, or maybe Taiwanese. Spend your money where your conscience tells you to, but a lot of what's coming out of China is quality stuff these days.

1
Reply
This comment has been rated as unhelpful by Slickdeals users
Joined Jul 2004
L5: Journeyman
620 Posts
68 Reputation
02-17-2022 at 05:33 PM #40
I must say, mine just got delivered and this is WAY better than I was expecting for the price. I have another Statgear from a few years ago thats D2, Micarta handles and larger width blade. I was impressed with that and am impressed with this. Sure it isn't Spyderco or more expensive, but for an EDC that if you lost you won't cry, its great. For the record, I do carry a Buck 112 slim for my EDC because if NYC laws and its made in America, but these Statgears should get more respect due to the price point. I am thinking of getting the tan color now to gift later. The box they come in are hokey, but nice.

1
Reply
This comment has been rated as unhelpful by Slickdeals users
Joined Oct 2006
L5: Journeyman
549 Posts
133 Reputation
02-21-2022 at 08:40 AM #42
S30v is a great all-round steel that sharpens well, doesn't chip too easily, and isn't super expensive. It's a class above the D2 steel that you will see on most Chinese made knives like the Ausus in this deal, but most don't consider S30v a "super steel" anymore, so it doesn't command premium prices.

I really like the Benchmade Bugout with th CF-Elite handles as an everyday carry. It's so light you forget you are wearing it until you need it. If spending $150 on a pocket knife seems too high, you can get the Chinese clone (with D2 steel instead of S30v) on wish dot com for $20 to try it out, then if you really like it, buy the real thing. The clone is a really good copy of the original bugout.