Slickdeals Forums Deal Talk War and Peace: Translated by Richard Pevear and Larissa Volokhonsky (Vintage Classics) (eBook) by Leo Tolstoy $1.99
Advanced Search
Sorry, this deal has expired. Get notified of deals like this in the future. Add Deal Alert for this Item
Popular Deal

Often called the greatest novel ever written, War and Peace is at once an epic of the Napoleonic Wars, a philosophical study, and a celebration of the Russian spirit. Tolstoy's genius is seen clearly in the multitude of characters in this massive chronicle—all of them fully realized and equally memorable. Out of this complex narrative emerges a profound examination of the individual's place in the historical process, one that makes it clear why Thomas Mann praised Tolstoy for his Homeric powers and placed War and Peace in the same category as the Iliad: "To read him . . . is to find one' s way home . . . to everything within us that is fundamental and sane." 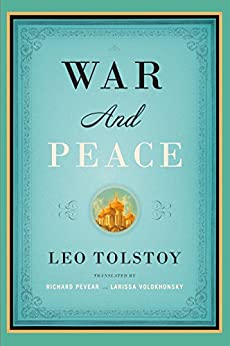 phoinix posted this deal. Say thanks!
Add Comment
Reply
in eBooks (9)
If you purchase something through a post on our site, Slickdeals may get a small share of the sale.

Thinking in Bets: Making Smarter Decisions When You Don't Have All the Facts (eBook) by Annie Duke $1.99
$1.99
4 0
Frontpage Deal

Unwinding Anxiety: New Science Shows How to Break the Cycles of Worry and Fear to Heal Your Mind (eBook) by Judson Brewer $2.99
$3
77 35

This comment has been rated as unhelpful by Slickdeals users
Joined Sep 2012
L2: Beginner
31 Posts
42 Reputation
05-17-2022 at 05:59 AM #2
Obligatory reference to the free Standard Ebooks version for those that don't mind an older translation: https://standardebooks.org/ebooks...lmer-maude

0
Reply
This comment has been rated as unhelpful by Slickdeals users
Joined Apr 2009
L3: Novice
246 Posts
370 Reputation
05-17-2022 at 07:16 AM #3
There are claims in the reviews that this version isn't actually the Richard Pevear translation (both for Kindle and print). Those of you who bought it, can you confirm it is that translation?

0
Reply
This comment has been rated as unhelpful by Slickdeals users
Joined Aug 2014
L5: Journeyman
520 Posts
219 Reputation
05-17-2022 at 07:29 AM #5
Haven't bought it, but from looking at the Preview on the Kobo link, it contains the copyright page confirming the translators, as well as the "Principal Cast of Characters" section that the Amazon review claimed was missing.

0
Reply
This comment has been rated as unhelpful by Slickdeals users
Joined Apr 2009
L3: Novice
246 Posts
370 Reputation
05-17-2022 at 07:54 AM #6
Thanks. I did check the sample and see that, but wasn't sure if that meant with certainty that's the version which will appear in my Kindle. I haven't seen before claims that the Kindle version isn't the listed version, so I didn't assume the sample would be confirmation. It does seem like some of the reviewers claiming fraudulent Kindle versions failed to understand the differences of P&V from other translations. They might have been feeding off the paperback issues. Hard to say.

Edited to add: TU and repped

This comment has been rated as unhelpful by Slickdeals users
Joined Dec 2010
L6: Expert
1,563 Posts
8,342 Reputation
Original Poster
Pro
Expert
05-17-2022 at 09:52 AM #9
This is public domain book and there are more than 150 Kindle editions of it on Amazon, one of them even has same cover. Amazon shows rating for specific edition when you click "See all formats and editions", but I see no way to read reviews for any specific edition.

But I believe Amazon uses some stipped-down cloud reader for sampler viewer, so you can be sure that they show sample of the book you are going to buy.

0
Reply
This comment has been rated as unhelpful by Slickdeals users
Joined Apr 2009
L3: Novice
246 Posts
370 Reputation
05-18-2022 at 06:10 AM #15
Yes it is, but it's also a bit controversial. This translating duo takes a different view of the role of translation then the typical "as accurate as possible combined with as smooth and idiomatic in English as possible" view. They focusing more on preserving the author's intent and style. For example, all of the French that was in the original final version is left in French with footnotes for the translation. People claim Tolstoy put in so much French dialogue to highlight the idiocy and far remove of the noble class. But most translators feel the text needs to be readable and translate the French into English in the text, and might put the original French in a footnote. Richard Pevear discusses their view in the opening introduction, which is available in the Kindle sample. Whether this is the translation for you comes down to preference. The translator matters greatly, so it is a thing to reflect on before you purchase and ultimately read. Several of their translations of classic Russian novels have been on sale recently. If this is a genre you're interested in, keep an eye out for more of these deals. I suspect more will be on sale throughout the Russian war.

Edited to include: Critics generally claim that the Maude translation, which has recently been updated by Amy Mandelker is the more accurate version. Louise and Aylmer Maude were a Russian-speaking British couple who were friends of Tolstoy and given his blessing to translate the text. This is the translation I'd recommend if you want a version that sticks true to the literal translation of the text with non-modern English. If you want the text updated to correct errors and which keeps the original French and Russian spelling of names, get the Maude version updated by Mandelker. One rather standard recommendation is to read the first paragraph of all or several translations and pick the one you like most because ultimately these are long texts and you'll be more likely to finish them if you're reading a version that flows well for you.