BJ's Membership $25 year if you rejoin after membership expires , valid until 2/19/17

$25.00
+23 Deal Score
34,069 Views
I received this in the mail today. May be a YMMV. It has what appears to be a generic coupon code at the bottom, so hopefully it can help some people. In store only.

See attached pic of coupon below... 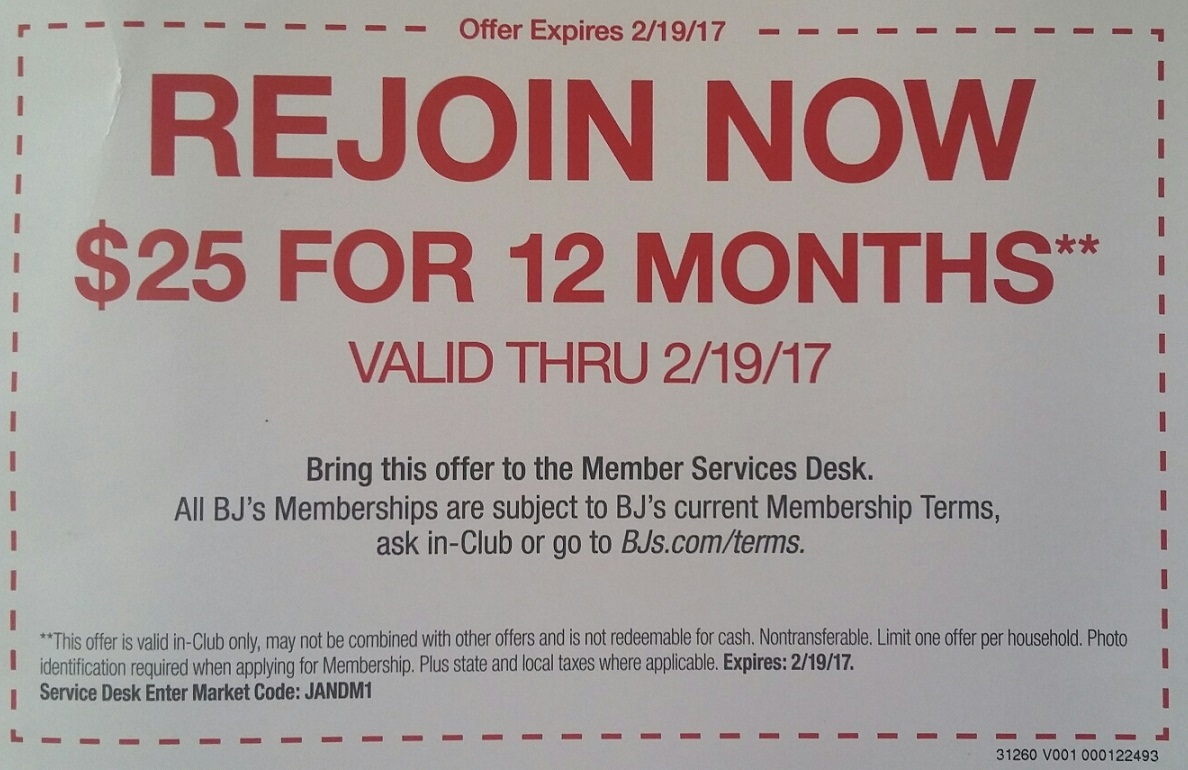 freshsqueezed posted this deal. Say thanks!
Add Comment
Reply
Created 01-17-2017 at 03:19 PM by freshsqueezed
in Memberships (5) Get BJs Wholesale Coupons
If you purchase something through a post on our site, Slickdeals may get a small share of the sale.
Deal
Score +23
34,069 Views
$25.00
See Deal
Want more deals like this? Create a deal alert for Memberships.
Add Deal Alert for Memberships

Just print the above pic coupon and show it to them.

This comment has been rated as unhelpful by Slickdeals users
Joined Feb 2011
L2: Beginner
30 Posts
14 Reputation
01-27-2017 at 10:47 AM #9
where is the attachment 🤔. am I missing something? please can any one help me? Thanks in advance!
Reply Helpful Comment? 0 0
This comment has been rated as unhelpful by Slickdeals users
Joined Jan 2017
New User
1 Posts
14 Reputation
01-28-2017 at 04:42 PM #10
I also got this in the mail a couple of weeks ago and it expires the same day in february. It worked great, even though my membership had expired almost a year (or more) ago. So, to the person who was asking if it would still work after a year, it definitely worked for me and I was in the same situation! I don't know if it's up to the individual BJs warehouses, managers, or clerks at different locations, but I would say you would have no problems being able to use it. They like having former members return!

After 1 year of Costco, we found BJs to suit us better. Accepting all cards, in addition to store coupons also able to stack outside coupons, using all types of credit cards, we were waiting for any BJs "Rejoin" coupon. Only thing that I will miss in Costco is their cheap passport photo.

I printed this and went to the Club and they basically wanted the old expired card. Apparently they would need the Old card for accepting the printout coupon which is generic. I did not have it on hand, but provided my DL and my address and asked them to search. They did and were able to locate my old records. I was able to convince the lady to use via the above method.
If you received a coupon bearing your home address, then it will be no problems even if you do not have your expired card.

I had my renewed membership for 25$ and I also pre-approved for the BJs Perks MC which qualifies for a 10c per gallon below already the lowest price within 10 miles of where I am. And next year the renewal fee would get a 10$ below standard rate which will be 40$ as long as the MC is open....

Escape from Tarkov 20% off

Vacationing in NYC is Way Less Expensive Than You Think

The Best Robot Vacuums of 2020
Copy Code & Open Site More Deals from
Did this coupon
work for you?
Copy
Link Copied to Clipboard