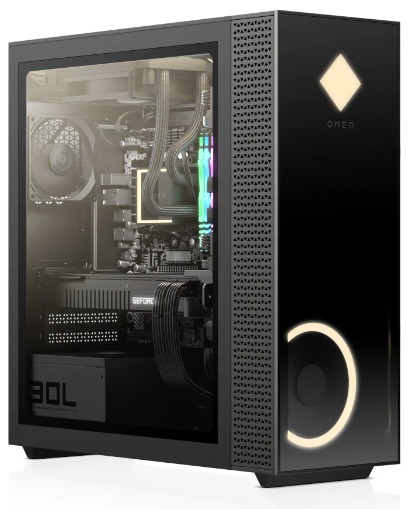 Suryasis posted this deal. Say thanks!
Add Comment
Reply
in Desktop Computers (4) Get HP Coupons
If you purchase something through a post on our site, Slickdeals may get a small share of the sale.

The machines are nice - quality case, nice aesthetic - RGB, but tasteful :-D - and a moderate number of ports, inluding one USB C on the back. There are two M.2 slots for SSDs in addition to the M.2 wireless. They share a set of PCI channels, and are only v3, so there's no real value to RAIDing them, but it's nice if you want to add more space or a M.2 game drive in the future. There are two 3.5" slots with tool-less drive trays for big storage. There is no place for an optical drive. The i9-10850 is good, but loses 15-20% to Ryzen 5600 in single core and the 11900 or the 5800 in multi-core raw performance. Mine happens to o/clock 5.3 on 2 cores and 4.9 on all cores; good enough for CAD and light finite element analysis work I do.

Mine has a f'ed up audio channel - can't figure it out, but I think there's a glitch on the MB; it will be easier and cheaper to just buy USB adapter than have to deal with HP and have to replace the entire board.

As I said, I bought two, stripped and sold one except for the memory and GPU. I put the extra 3070 in my gaming rig, dropped the extra 16GB of ram into the Omen I kept for my work PC. The GPUs I set at -500 on the core and +1100 on the VRAM and they mine 60MH/s each for Ethereum; roughly $225/mo at current gas rates and ETH price. I expect to get around 0.2 ETH ($800 at the peak, $480ish right now) between when I got them and when EIP1559 hits mid-July (when gas for ETH transactions is burned rather than awarded). With so little time left before the Fee change, and with gas fees down in general after the bubble, I wouldn't count on mining as a serious cost offset on these.

Note: I paid net $1620/box after cb, but I've been playing on mine for all that time and my ETH profits more than make up for the discount. Plus, I sold my old GPUs at/near the top of the market (the other reason for getting them early).

0
Reply
This comment has been rated as unhelpful by Slickdeals users
Joined Jul 2015
L10: Grand Master
14,189 Posts
11,695 Reputation
Original Poster
Pro
Expert
06-13-2021 at 08:59 AM #8
Regarding HP Omen 25L and 30L Desktops, they have been reviewed by a lot of reputed reviewers like Linus, Hardware Canuck etc and it is one of the few Pre-Builts, which uses standard components for all the parts. The motherboard, although made by HP, it is a standard uATX form factor board with standard 24-pin connector. The PSU is standard ATX, the Ram, SSD all are from reputed vendors like Kingston and WD and really good quality and high performance components.

I would live to buy from Costco with their customer service and extra warranty,but not this junky Omen line of desktops.

2
Reply
This comment has been rated as unhelpful by Slickdeals users
Joined Jul 2015
L10: Grand Master
14,189 Posts
11,695 Reputation
Original Poster
Pro
Expert
06-13-2021 at 11:47 AM #12
What Ram did you purchase which didn't work with the desktop? And can you explain about the locked Bios? Is it that you were not able to Overlook?

Never Mind, I just checked the Costco deal thread in here and found out your useless rant where literally everybody has downvoted each of your posts to abys. You basically posted some idiotic comments to say that it is junk.

Basically you threw a tantrum all over that thread saying that it is junk to you because it has a uATX motherboard and Graphics card from HP, not the EVGA GPU you were expecting.

The Comcast folks have a rewards program based on length of service, requires signup.
5 • 8