Special offers for this item on Amazon product page:
Get 1 of WEme SATA IDE Hard Drive Adapter for $18.49 offered by WEME. Enter code PD01MST003 at checkout. Here's how (restrictions apply) 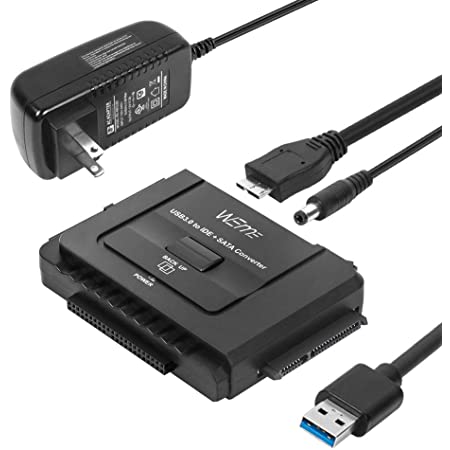 logicpad posted this deal. Say thanks!
Add Comment
Reply
in Other
If you purchase something through a post on our site, Slickdeals may get a small share of the sale.

Check Out Similar Other Deals

This comment has been rated as unhelpful by Slickdeals users
Joined Feb 2021
L1: Learner
8 Posts
50 Reputation
Our community has rated this post as helpful. If you agree, why not thank ?
06-18-2021 at 07:50 PM #2
Got mine today. It's way worse than my others on the SATA connector. CrystalDiskInfo loads properly and does query S.M.A.R.T. info (only on SATA not IDE though). HDTune hangs with it connected; the first SATA adapter I've ever had do that. Need to test the IDE connectors yet and perf.


Update: Even at $14.49 this is not a good deal. I am considering returning it, my first Amazon return ever.

Bad:
- You cannot connect 2x IDE's at the same time (a 3.5 and a 2.5) even with enough amperage from the power brick. It shuts down and will not show either drive. (Sata + 1x IDE will work but not all 3 even after I set the 3.5" to slave per instructions)
- As stated before, some programs hang when trying to communicate with it when a drive is in the SATA port, HDTune specifically hangs when trying to open, or when selecting that drive
- HDTune also reports a scrambled IDE drive model. e.g. ST3400362A become TS430063A2 where every other character is swapped.
- Perf on writes even on my largest (400GB) IDE 3.5" drive was abysmal -- only 14 MBps sequential when reads were 71 MBps.
- No S.M.A.R.T. info is transferred over IDE even to Crystal Disk Info
- Surprisingly, even with a super low power 2.5" SATA SSD, you still MUST use the power adapter for it to work. No other SATA adapter requires power for a small device with under 500ma draw.

An old dual 2.5/3.5 IDE only USB 3 Sabrent brand cable even got 17 MBps on sequential writes when compared with the same drive and partition and has no communication issues with any program accessing it.

I'm pretty sure this one is going back now after further testing. Very disappointed. I see that WeMe now has this branded as Alxum and looks identical (and sold by their "store"). I suspect they're all the same parts, but if anyone knows if there are different chipsets in these please post the details.

I've been very happy with other WeMe SATA and USB devices, but definitely not this one.

Affordable Organizers That Make Your Life So Much Easier

OnePlus is Launching an Affordable AirPods Pro Competitor in September
Copy Code & Open Site More Deals from
Did this coupon
work for you?
Copy
Link Copied to Clipboard