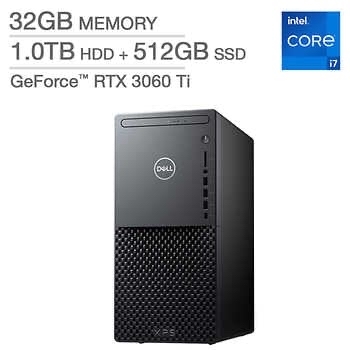 CalvinFan posted this deal. Say thanks!
Add Comment
Reply
Created 07-10-2021 at 09:45 PM by CalvinFan
in Computers Get Costco Wholesale Coupons
If you purchase something through a post on our site, Slickdeals may get a small share of the sale.
Deal
Score -12
2,608 Views
$1,600.00
See Deal
About the OP
Send Message
Joined Nov 2007 L3: Novice
76 Reputation Points
15 Deals Posted
37 Votes Submitted
138 Comments Posted

0
Reply
This comment has been rated as unhelpful by Slickdeals users
Joined Aug 2007
L5: Journeyman
871 Posts
97 Reputation
07-19-2021 at 11:55 AM #3
The problem with Dell is they might have a bunch of proprietary parts, such as mainboard and power supply, which makes repairing and replacing parts much harder. Better to pick all your parts and put it together yourself.

0
Reply
This comment has been rated as unhelpful by Slickdeals users
Joined Oct 2007
L1: Learner
19 Posts
30 Reputation
09-15-2021 at 04:15 PM #5
It's not a bad deal, it's just not particularly slick. As the GPU market fluctuates, we are seeing a mix of hot deals and deals that would have been hot a few months ago because there was no other way to get a GPU. In this case, it's not a bad deal, particularly if you are the type of person who will never want to crack the case and upgrade things later on and you want something now. The processer and GPU are both in a reasonable "bang for the buck" range for new hardware and the memory (both RAM and bulk storage) is more than enough for most users. IMO, this is a better deal than the ABS machine with the equivalent CPU/GPU at Newegg which provides an upgrade path, but starts with less memory and less storage for the same price.

This is a perfectly respectable machine to edit that 4k vacation video on, and will play games well enough to be the envy of all the other 40-something dads on the block -- but it will be scoffed at by the video professionals and the tech bros who snapped up 3090 based machines months ago.