Slickdeals Forums Deal Talk ASUS DUAL-RTX2070S-O8G-EVO Grade A refurbished from ASUS eBay store $549.98
Advanced Search
Sorry, this deal has expired. Get notified of deals like this in the future. Add Deal Alert for this Item
Popular Deal

JZFeng
+9 Deal Score
9,376 Views
Happen to see ASUS DUAL-RTX2070S-O8G-EVO Grade A refurbished from ASUS eBay store at $550, cheaper than all the GPUs that I recently reviewed on Craigslist.

This is refurbished GPU from ASUS directly, I am more confident with the quality. 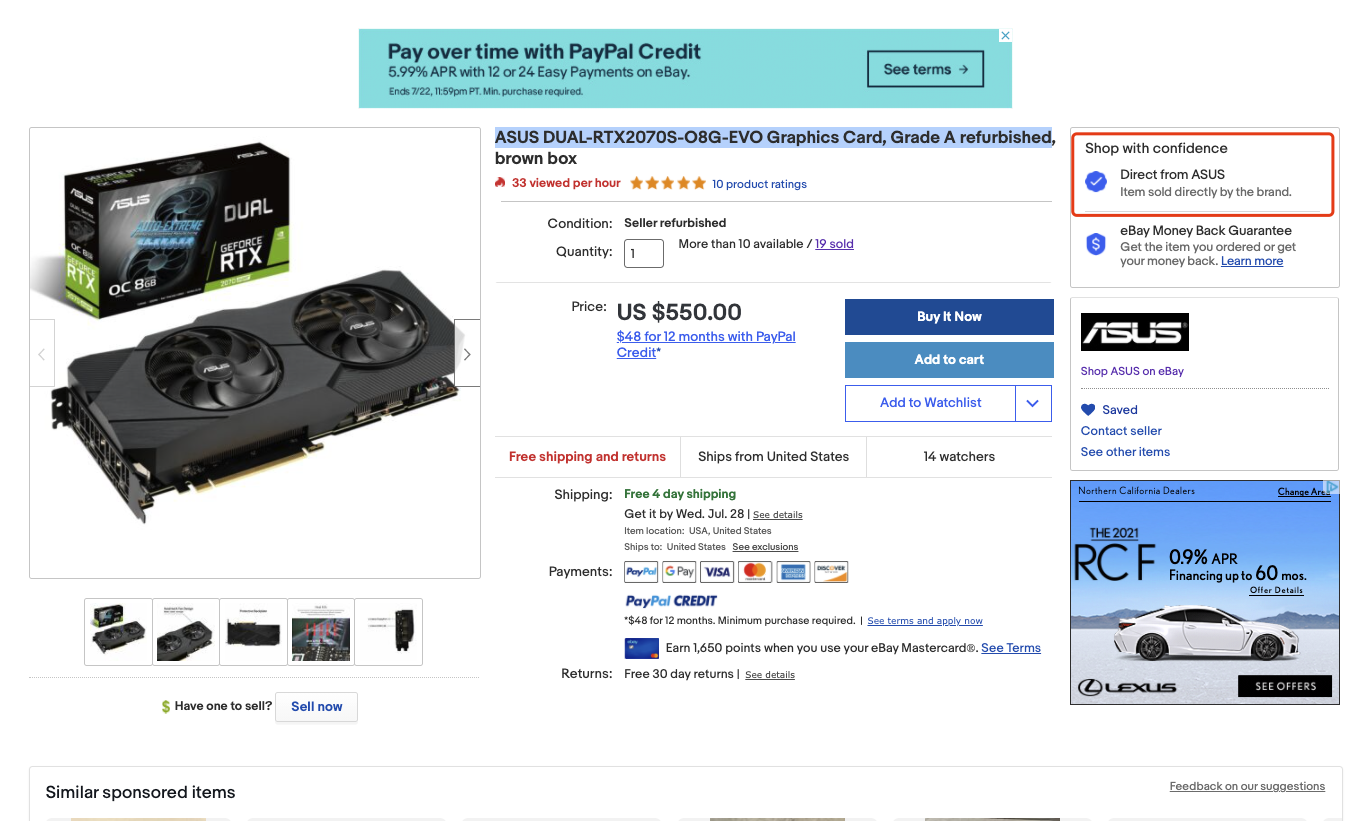 JZFeng posted this deal. Say thanks!
Add Comment
Reply
in Video Cards (4)
If you purchase something through a post on our site, Slickdeals may get a small share of the sale.

I guess it's better than buying used off someone on Craigslist but still?

Asus direct? this is shameful, Asus you can do better.

I rather wait in line again at BB if I needed another card, at least I can get a new card at MSRP for sacrificing 8-10 hours camping in line lol.

Depends on bad you need a card...

0
Reply
This comment has been rated as unhelpful by Slickdeals users
Joined Jul 2014
L7: Teacher
2,585 Posts
736 Reputation
Our community has rated this post as helpful. If you agree, why not thank ?
07-22-2021 at 05:08 AM #12
Unfortunately, not everyone can camp out at Best Buy for a day just to get a GPU. Not to mention that Nvidia doesn't seem to be making any founders edition cards anymore, so BB's stock is going to about the same as anywhere else right now, which is scarce at best.

As for these being old cards, yes, but the performance is around a 3060, and once you tack on the "Partner Tax" these are around MSRP of a 3rd party 3060.

This is a decent solution for someone in need, IMHO.

As for the card itself, I believe these are the cards ASUS released with the wrong screws attaching the heat sink to the GPU, causing there to be literally no pressure between the silicon and the cold-plate. This would cause overheating/thermal-throttling especially in a tower case where the heat-sink would end up just dangling from the mounting screws.

A simple swap of the screws likely fixed all these units, and the built-in protections of the GPU would have kept any permanent damage from happening to the components.

If I needed a GPU right now (needed being the key word) I would jump on this.

I've been been able to get cards but I understand not everyone is as resourceful as I am.

Last 30 series card I got was on Tuesday's best buy drop. At least in my area they dropped 200+ cards nearly everyone in line was offered to buy a card. All founders editions and all models!!! Who says they aren't making them any more? Even the elusive 3070ti founder's was there.

I feel like best buy will be doing this again but that's just my guess. It seemed really successfull for best buy and Nvidia to keep offering cards direct to gamers this way.

IMHO this isn't a good deal but everyone is needs are different.

Good luck to all. Just offering my two cents.