Slickdeals Forums Deal Talk ASUS RT-AX82U AX5400 WiFi6 Router - $200
Advanced Search
Sorry, this deal has expired. Get notified of deals like this in the future. Add Deal Alert for this Item
Frontpage Deal

Thanks to Community Member anarkie13 for finding this deal. 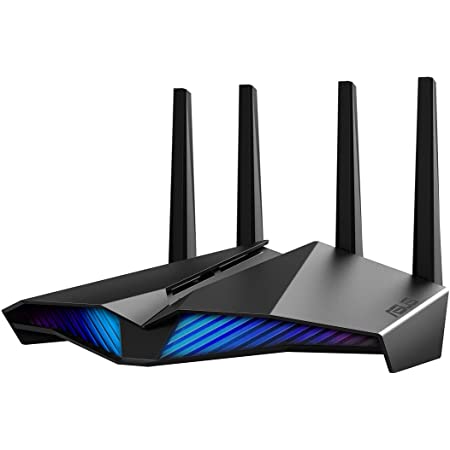 anarkie13 posted this deal. Say thanks!

Written by Edited October 13, 2021 at 12:21 PM by
Just picked this up last week at Best Buy for a bit more and then saw it went on sale further.

Great router capability wise, WiFi6 works great and has all of the key features for a current WiFi6 (non-E) router, OFDMA 160MHz, etc... with aiMesh for future build up if needed.. Great coverage, No Merlin yet, unfortunately. I turned of all QoS and "Protection" (No thanks Trendmicro) and get great speeds all around on fiber.

Got this to replace a Nighthawk Mesh that decided to start not playing nicely. Covers the whole house like I need without being a mesh. Speed drop off at the furthest room is still acceptable for the required tasks.

You can keep or turn off the RGB.

Not that Eero units are bad, they are known for being great and simple units. Google is still on Wifi5, if I remember, so a bit of a step back if you have WiFi6 devices.

Systems like these are for those that want more control on their routers. Fine tuning. Faster speeds with better management of concurrent connections. Also, you have to be careful with mesh systems unless you know your needs well. Getting one without a dedicated backhaul (Google is your friend) means big dropoffs on the node connected devices. Fine if you plan your setup well enough.

I've had 2 mesh setups before. Samsung AC1300 (not very powerful and handoffs between nodes weren't clean, killing connections). Then the Netgear AX1800 Nighthawk 2 unit setup. Worked fine for a year, but then it didn't like my upgrade to gigabit fiber. Wouldn't get my speeds, had to mess with far too many settings. When I finally got it where I wanted it, it lost my settings. Went to check for new firmware and it hung, causing me to hard reset the whole system. I went to look to call Netgear, but apparently, after 90 days they expect you to pay for ALL support. They can simply be in my "do not send business their way" list after that.

A bit of a novella, but I hope this helps. The main takeaways I can give you is this:
Know your house, and how well signals travel - My house was built by the ancient Mayans apparently and signal does not go as far through the walls.
Know your needs - lower demand and lower speed bandwidth, you can get away much cheaper than this or the others listed.
Don't give Netgear any business - Sorry Netgear, it's been a good run, but to charge to talk to support? No thank you. I usually am the support for people I know, and I don't charge anyone I know or anyone they know for helping them. A good company supports their products better than 90 days. At least for the warranty period (1 year) is a reasonable minimum.
This will give much higher speeds if you have a gigabit internet plan. The google mesh will give you better coverage but will top out at around 300ish.

This comment has been rated as unhelpful by Slickdeals users
Joined Oct 2016
L1: Learner
27 Posts
14 Reputation
10-13-2021 at 09:39 AM #4
You mentioned that you bought it before it went on sale. Just an FYI as long as you're still within the return period (depending on your reward status) you can request a price adjustment for the difference at Best Buy.

0
Reply
This comment has been rated as unhelpful by Slickdeals users
Joined Oct 2007
L7: Teacher
2,040 Posts
257 Reputation
Our community has rated this post as helpful. If you agree, why not thank ?
10-13-2021 at 11:14 AM #8
I've had this router about a month since it was first released after going through a few others. Downside: no DDWRT and Tomato support.

Upside: extremely reliable and solid for me, which is what I was looking for after the 68U was the last Asus I ve found to be dependable. 5ghz band could have use a bit more transmission strength imho but that's really the only real criticism I have. But we re talking I expect 5 bars vs 4 in certain locations. Nothing that I've found to have a real world impact on speed and connection stability. In case it matters: I have on average 38 active connections going on it.

It is relatively large but it's pretty cool looking (imho of course) and the RGB has different modes, or can be turned off all together if that's what you want. I'm sure some will argue the ax86 is the one to go with instead but I have not regretted going with this one instead at all. Speeds between the two are virtually identical based on the reviews. Asus has been actively pushing out firmware updates with security fixes for it too.

0
Reply
This comment has been rated as unhelpful by Slickdeals users
Joined Dec 2013
L2: PRO
71 Posts
25 Reputation
Our community has rated this post as helpful. If you agree, why not thank ?
10-13-2021 at 12:20 PM #14
This will give much higher speeds if you have a gigabit internet plan. The google mesh will give you better coverage but will top out at around 300ish.

0
Reply
This comment has been rated as unhelpful by Slickdeals users
Joined Aug 2014
L4: Apprentice
409 Posts
72 Reputation
10-13-2021 at 12:26 PM #15
I bought it earlier myself but went through GameStop
Same price as well
Tired of waiting for a great deal on an AX86U. This will serve my purposes of what I'm wanting
Can't wait