Slickdeals Forums Deal Talk Animal Farm Kindle Edition : $0.14
Advanced Search
Sorry, this deal has expired. Get notified of deals like this in the future. Add Deal Alert for this Item
Frontpage Deal

Thanks to Community Member l_r_r for finding this deal. 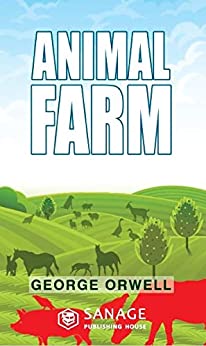 l_r_r posted this deal. Say thanks!

A World Without Email: Reimagining Work in an Age of Communication Overload (eBook) by Cal Newport $1.99
$1.99
8 3

0
Reply
This comment has been rated as unhelpful by Slickdeals users
Joined Jul 2013
L7: Teacher
2,788 Posts
622 Reputation
12-04-2021 at 09:40 AM #37
I love how the mods delete my comments (and probably the guy I was arguing with), but leave this guy's up. And you guys say you aren't biased. This is the bullshit that started the whole thing.

This comment has been rated as unhelpful by Slickdeals users
Joined Nov 2010
L3: Novice
279 Posts
101 Reputation
12-04-2021 at 02:02 PM #38
The core is the same for social democrats and democratic socialist. Lenin is a social democrat. Democratic Socialists (Trotskyists) and Social Democrats do not play well with Stalinists. The problem is both their Marxist collectivism ideals centralize powers which tailored and begging for psychos like Stalin and Mao to hijack it to do ills, and there's no way Lenin can stop him (because once the power's already centralized, the only way to get out of it is another bloody revolution). That's what made Leninism's focus on Cultural Darwinism (people constantly trying to overthrow each other in the nastiest way possible) so toxic: we'd end up spending 99% of our time fighting each other instead of doing something productive. The collectivist ideology itself is like bio-weapon that needs to be universally outlawed because the massive damage it had and will continue to cause.

Also don't let the commies fool you. Nazi is still national SOCIALISM. Hitler not having the time to micromanage your property doesn't mean it's really private. Private property is still at his mercy under the totalitarian regime, and he could take it away any time at his whims. Nazi differs from commies in where they draw the line for the classes. Commies drew the line at capitalist-vs-workers (Mao's version was landlords-vs-farmers) so they erase national boundaries, while Hitler drew the line by race. That's why it's ironic that woke commies BLM wants more racial segregation now makes them a monster combining both Nazi and international socialism into a totalitarian nightmare

12-05-2021 at 08:42 AM #39
Probably because you were trolling, calling an entire political party nazi's (a group who committed genocide), engaging in personal attacks against other users, etc and now cussing? Also you were the one who took this from 0-60 in a single post. Slight difference in scale, proportion, and volume, but you'll never see that.

"Never let a tragedy go to waste".....clearly someone lives by that motto.

12-05-2021 at 08:54 AM #40
The fact you think "woke," "communism," and "BLM" are a single group or a combined political philosophy is astounding. Or are you just trying to wedge all those concepts into a single container in an attempt to demonize many concepts all at once? The fact it took you two large paragraphs to contrast the the differences between social democrats and democratic socialists and "woke commies BLM" got a single sentence really answers that question.

BLM = Black Lives Matter. Nothing more and nothing less. No calls for "segregation." (Wow) Just less black people being choked to death for "resisting" even after their heart stops / legally dead...but still "resisting."

Communism...you should look that up. No link with the concept of "being woke" or BLM. Concept regarding economics and the overall structure of a system of government.

0
Reply
This comment has been rated as unhelpful by Slickdeals users
Joined Nov 2010
L3: Novice
279 Posts
101 Reputation
12-05-2021 at 02:43 PM #43
BLM (the organization) was started by self-proclaimed Trained Marxists (especially Patrisse Cullors, she's still proud of it: https://youtu.be/rEp1kxg58kE?t=79) despite she can afford buying multi-billion dollar apartments. During the 60s, Mao incited the black lefts to wreak havoc in the free world using the slogan of racist/white-supremacists/imperialists as part of ChiCom's campaign 'radiating the communist Cultural Revolution to the entire world turning it red'. In the 60s, the black communists in America proudly called it the "Black Like Mao" movement, which coincidentally have the same acronym BLM.

The 'trained' in 'trained Marxist' is actually part of the standard communist regime's workflow to train new recruits for the communist ruling classes. It's also used in Red China. The first step is to get rid of a newbie's all existing culture, morals and religions (deprogramming), then re-program them with the Marxist world view that sees everything as a class struggle. If the new kid is good at influencing crowds, they are further trained with communists' SOP of 'organizing' crowd movements and they graduate as communist leaders filling the roles of the 5% ruling classes manipulating and controlling the 95% of the population.

I supporting fighting for equal inalienable human rights for all, but not self-entitlement (positive rights). BLM was communists attempt to take advantage of the disadvantaged and use them as a political tool for their socialist agenda. That's what communists do. They are parasites. While the original cause itself could be noble, the people organizing it are filled with ill-intentions and hidden agenda aiming to take advantage of the victims just like ambulance chasers, then pervert the movement for their own socialist cause.

(https://link.springer.com/article...-00690-4):
BLM's "mission is to eradicate white supremacy and build local power to intervene in violence inflicted on Black communities by the state and vigilantes." This is pure communist language. Norma people don't speak like that. What BLM does reeks communism to the extent that it's hard to ignore.

Communists are cunning linguists. They use vague words such as "oppression" that they can arbitrarily stretch the definition to destroy their political enemies: Mao declared all landowners, school teachers, small business owners as 'oppressors' and organized the Little Red Guards to destroy, dehumanize, torture, and eventually murdered them for the class struggle. Students killed and cooked their teachers and high school principals and cooked their flesh and eat it out of spite because they are the 'oppressor'. (https://www.nytimes.com/1993/01/0...ibals.html). BLM is a toxic bunch following the same playbook.

I see very few BLM branches who got disillusioned with the movement because just like any communist organized movements and I'm glad that they start to wake up to the fact they are being played by the communists. Those are the "aware and actively attentive to important facts and issues" wokes you are talking about. They are should have started their own under a different name and not let the communist ideologies trash and hijack their cause. Joining hands with communists are like working with thugs and Mafia. Ultimately the thugs get what they want and you are left holding the bag.

Also police brutality and abuse of power applies to everybody, not just blacks. I've been a victim of the latter as well. BLM started from the very wrong premise because they are playing identity politics, demanding favoritism towards a specific identity (like race) instead of eradicating rogue police for everybody. I'm not surprised because the communists organized it.

This is what sets BLM apart from Hong Kong's Freedom, Human Rights and Democracy movement that started in mid-2019: the protesters fight for equal application of law and inalienable rights (including freedoms, which are civil liberties) FOR ALL, which protects the rich, the middle, as well as the poor, the gays, the straight, and everything in between. They don't care if you are immigrant or are of a different race. They only fight for the common ground and carefully not let rogue people hijack the movement. On the other hand, BLM only SELFISHLY fight for certain identity groups.

Once a movement explicitly caters only a certain group, it becomes a class struggle which the Marxists engineered to pit people against each other until the mutual destruction give the nasty psycho state/crony capitalist leaders to take advantage of for their power grab.

BTW, if BLM is all about "Marxism," why do we see zero Marxist activity at any of the marches? Seems odd, right? Why aren't the marching on Wall Street as opposed to protesting a dead person? LOL...

Your claim has been repeated umpteen times by so many self proclaimed free thinkers...it is almost like you were told to think it was true. Even the verbiage of "self-proclaimed Trained Marxists" is repeated verbatim. Cue cards?

1
Reply
This comment has been rated as unhelpful by Slickdeals users
Joined Jul 2013
L7: Teacher
2,788 Posts
622 Reputation
12-05-2021 at 08:37 PM #45
You're wrong. I did not call Democrats Nazis. Nor did I call leftists Nazis or anything of the sort. I said leftists, or Democrats (I can't remember the wording, and it's lost now due to censorship)--I said that Democrats were using the tactic commonly referred to as a Reichstag Fire, an evil and dirty tactic used by the Nazis that has become legendary precisely because is it the sort of evil tactic that we should watch out for. We all say "never again." What do you think that slogan's supposed to mean? I think honest and good people may come up with slightly different answers to that question, but I think reasonable and honest people can agree to

Now we may or may not agree on whether the Democrats have made Jan 6th into a Reichstag Fire (I think it's ridiculous to deny they've used it to make a power grab.), but that's not the point. The point is it's my duty as a good and conscientious citizen to call out such behavior when I see it. And it's absolutely not the same thing as "calling someone a Nazi."

Which, it's worth saying, is the extreme to which Democrats have gone since WWII ended. Democrats and leftists across the West have thoughtlessly, but gleefully tarred anyone they disagree with the labels "Nazi" and "Fascist." It's the whole point of Antifa, your own little Brownshirted battalions, almost universally beloved by American leftists. So unless you're one of the vanishingly rare leftists whose willing to vociferously denounce Antifa, I'd say you're just another "by any means necessary" hypocrite.