Thanks community member EagerShow5470 for sharing this deal 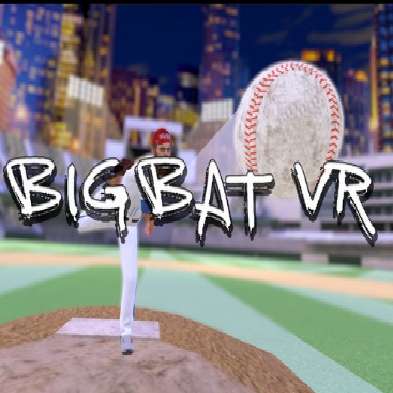 EagerShow5470 posted this deal. Say thanks!

In Big Bat VR, players are exposed to a highly personalized virtual environment.

You can create a private profile adjusted to your abilities and comfortable game options.
- Big Bat VR includes multiple full-scale and life-size visuals, ranging from locker room and baseball stadium to cheering crowd and virtual pitcher.
- Learn how to hit the ball further and further away during a set amount of time.
- Get inspired by the fireworks that appear in the background celebrating your victory each time you hit a home run.
- Explore our new feature and track your score at Global Leaderboard to compare your performance with other players' scores and reach mastery!
Visual effects, sounds, and light – we managed to pay attention to every detail in order to provide you with the most realistic and engaging VR experience you have ever had.

Is that pitcher wearing a MAGA hat?
Sure is! If you didn't have a reason to not download before....
Looks like hot garbage to me.... Every one of these 'app labs' games has been a terrible VR experience. I do not understand how these keep getting front page deal status. Just because someone asks for money and then realizes they just as well give it away, doesn't mean it is a good deal.

1
Reply
This comment has been rated as unhelpful by Slickdeals users
Joined Jul 2010
L2: Beginner
32 Posts
55 Reputation
01-27-2022 at 06:46 AM #5
Looks like hot garbage to me.... Every one of these 'app labs' games has been a terrible VR experience. I do not understand how these keep getting front page deal status. Just because someone asks for money and then realizes they just as well give it away, doesn't mean it is a good deal.

11
Reply
This comment has been rated as unhelpful by Slickdeals users
Joined Aug 2015
L2: Beginner
25 Posts
14 Reputation
01-27-2022 at 07:18 AM #9
Anyone have a recommendation for a realistic baseball game experience for the Oculus?

This comment has been rated as unhelpful by Slickdeals users
Joined Dec 2012
L3: Novice
204 Posts
54 Reputation
Our community has rated this post as helpful. If you agree, why not thank ?
01-27-2022 at 07:31 AM #10
The App Lab games are definitely pre-alpha, alpha, and beta - stuff that hasn't gotten the Oculus Stamp of Approval to be brought up to the main store. You pretty much have to know the actual name of the game as well because when you search for App Lab games and aren't exact, you'll get Actual Store games and have to scroll down to App Lab results and click to see what they are.

These games are DEFINITELY mostly on the side of "I may be one person trying to figure out how to program in VR, anybody else want to see how I'm doing?" and the ones that charge money for it may have a small following willing to pay but no. Just no, generally speaking none of them are worth money in the states they are in.

There are a few winners, but considering none of them have passed the Oculus Test and aren't graded for comfort, you can almost guarantee a rumbly belly when playing most of the games if they aren't just 3D puzzles (sidenote: some of the puzzle games actually are fun but...why even do them in VR?)

Every once in a while you get a winner (Ancient Dungeon comes to mind) but even that game makes me break out into a full sweat after a few minutes because of movement and motion sickness. Which stinks because it's actually very fun. I can play Beat Saber and Thrill of the Ring and Epic Roller Coasters for an hour but Ancient Dungeon for 5 minutes and that's a shame.

I guess my point is I agree that these App Lab games shouldn't make it to front page of SD because I kind of thought a Slick Deal was something worth making a fuss over.

7
Reply
This comment has been rated as unhelpful by Slickdeals users
Joined Jun 2017
L2: Beginner
68 Posts
14 Reputation
01-27-2022 at 07:48 AM #14
Everyone? Nah, don't believe that. There are good games in app lab. Dead second, iron guard, tea for god, to the top, simple planes,ark-ade, etc. just search by top, and updated, it's worth trying. If you use the oculus browser, then go to sidequest and then app lab, you can search the entire store and link directly to downloads.