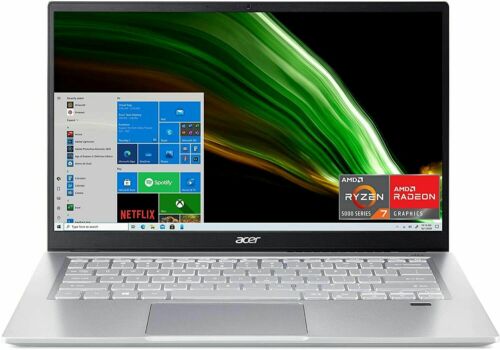 hocuspocusblade posted this deal. Say thanks!
Add Comment
Reply
in Laptops (6)
If you purchase something through a post on our site, Slickdeals may get a small share of the sale.

Edit: if you are okay with the memory the upside of the AMD version in addition to the cost savings is nearly half the power consumption (15w vs 28w) that said I have until mid-august to buy a laptop for a freshman in highschool and right now the Acer from Costco is the one to beat.

06-26-2022 at 08:01 PM #10
Um, when you're not working minimum wage? Seriously though 220 for 90 days satisfaction guarantee no fault returns, double the memory, more cores, thunderbolt 4 (with the corresponding rise in charging ability instead of the ~15W USB charging that this one offers), and being guaranteed a brand new battery and SSD would argue it's worth spending the extra money (tho as you pointed out this refurbished model can be shipped back for people to replace your battery and SSD if they fail within 2 years so perhaps that's a push.) But really unless you really really need to buy a laptop now I'd wait if you want a swift as the new screens are supposed to come out in the next month or so which will further drop the prices of the old screens / refurbished models. But yes 4:40 is cheaper than 660 that is correct you get a gold star in math my comment is about value and what you get for it I don't think I've had a computer with 8 gigs of RAM in nearly 10 years so can't imagine doing so again 🤷

Edit: presumably they've also changed other aspects of the computer since the AMD version you linked was released at the very least it looks like the Wi-Fi has been upgraded but that is less of an issue then the ram to me, but I am not as price conscious as you as I also fully expect to get the expanded 3-year accident/hardware warranty which is another 70if memory serves because I'm buying this for a 14yr old. I apparently offended you by offering an opinion ♥️

Have you any idea how rude and condescending your comments are to the vast majority of SD users?

06-26-2022 at 08:17 PM #12
sorry, that's why I said extremely price conscious originally before you responded which raises the question, is it as rude as using the LOL emoticon and asking questions like, is 440 close to 660 (or is it only offensive if it bothers you personally? Really, as I said it's a fine price but not fantastic given what $220 more gives you currently over it plus the whole, new OLED screens are coming soon (possibly as early as July.) Again, sorry I offended you (and ESPECIALLY anyone else offended as that's not my intention.) I'm a big fan of buying refurbished, but in this case, I didn't think it would work for my kid's use and said so in a non offensive way but then you responded in a certain way and I returned fire in kind with a bit of data because that's how I roll (offensively apparently.) Either way, have a good one and all that

EDIT: the OLED screens coming to the swift3 that I'm talking about: https://www.acer.com/ac/en/US/con...swift3oled

"Um, when you're not working minimum wage?"

I am retired, living on a fixed income so I take exception to your statement.
By virtue of your definition, I and many others viewing my post are clearly not as YOUNG & privileged as your good self to partake in any supposedly 'superior' deal (in your opinion) at an additional cost of $220.
$220 extra is another 50% more than the cost of this deal!
As a result of your previous post I deserve yet ANOTHER gold star in math, right?
So, thanks for that.
Suffice to say, most people in this day and age don't have bottomless pockets with regard to expenditure even if you do, OK.