Thanks to Staff Member f12_26 for posting this deal. 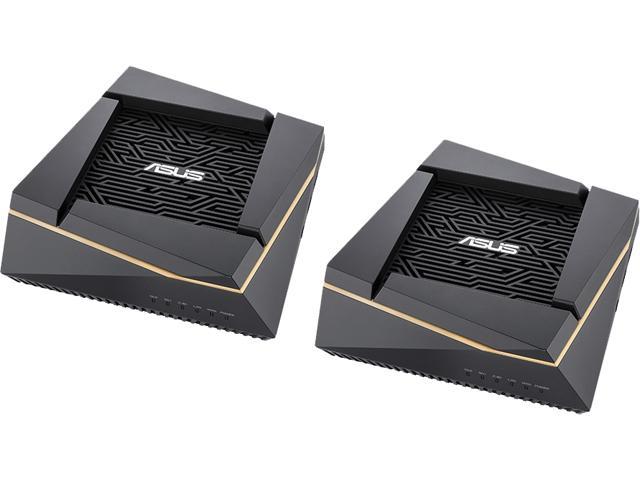 0
Reply
This comment has been rated as unhelpful by Slickdeals users
Joined Jan 2011
L9: Master
4,150 Posts
871 Reputation
08-06-2022 at 09:44 AM #47
They have poor customer service, have fleeced former buyers when selling items (would sell as new and send a refurb) and then if you try to return the refurb, they'll claim that you sent them a damaged item. Real scummy shi*

0
Reply
This comment has been rated as unhelpful by Slickdeals users
Joined Nov 2017
L2: Beginner
71 Posts
14 Reputation
08-06-2022 at 10:02 AM #49
Had an aging ASUS RT-AC68U which worked well for years and was still being updated but in my new townhouse I was getting constant signal drops in the second floor. I spent a few months looking around reading reviews ect and went with 2 of these AX92U and it works great for me, setup was super easy. I was hesitant to spend money on what is mostly wifi 5 router s when 6ghz is around the corner but realized all my devices are wifi 5 and I only have 200mps internet, this gives me full signal on the second floor and full throughput using wireless backhaul. No regrets after using it a few months, no more signal drop outs, no need for reboots, has been super stable.

0
Reply
This comment has been rated as unhelpful by Slickdeals users
Joined Nov 2017
L3: Novice
239 Posts
28 Reputation
08-06-2022 at 11:27 AM #50
I think he meant if u want to take advantage of the full speed of wifi6 mesh wired throughout your house without losing the 6ghz dedicated band. If wireless mesh, it will use the 3rd 6ghz band. (i think thats what im getting from this).

0
Reply
This comment has been rated as unhelpful by Slickdeals users
Joined Dec 2014
L5: Journeyman
587 Posts
64 Reputation
08-06-2022 at 05:29 PM #51
are these any better than a couple of ac68u's in mesh mode? i have them at the moment with ethernet backhaul, and they're not good at handoff for apple devices (haven't tried others). i think the signals from the two 68u's overlap too much, which causes devices not to switch from one to the other fast enough.

0
Reply
This comment has been rated as unhelpful by Slickdeals users
Joined May 2010
L3: Novice
476 Posts
90 Reputation
08-07-2022 at 06:00 AM #52
Works better for me. I actually made that same upgrade. It depends on your individual home though and there is a setting for adjusting when it hands over.

0
Reply
This comment has been rated as unhelpful by Slickdeals users
Joined Jul 2008
L6: Expert
1,761 Posts
240 Reputation
08-07-2022 at 09:13 AM #54
Can these be used as WAP only? I already have a dedicated router handling all my wired networking. Trying to move away from Unifi wireless

0
Reply
This comment has been rated as unhelpful by Slickdeals users
Joined Aug 2021
on the hunt
529 Posts
82 Reputation
08-07-2022 at 10:54 AM #55
Great tip TheEdge! I also see a few others posted about the benefits of MoCA.I wish I had heard about this last year. By my estimation, I could have used my Netgear Nighthawk R7000 with two MoCA adapters (cost: $115-$150 depending on which you buy, and another ~$10 for a POE filter [amazon.com]) to produce about the same coverage and speed as a $350 mesh system (maybe even a bit better, as MoCA is more resilient than wireless, so no risk of periodic signal drops). I use the ASUS XT8 mesh system and it's meeting all my needs (great coverage, range, speed) but I am shaking my head a bit! Total cost of MoCA: $125 (adapters+POE) versus $350 for mesh. So I paid about 2.8x as much.

These MoCA bonded 2.5 kit options (a set of 2 adapters) looked interesting to me, based on an Amazon search for MoCA adapters [amazon.com]. Seems 2.5 version of MoCA (bonded) supports fastest speeds and works the best. POE filter is needed to prevent your network traffic from leaking out of your house.I will keep this in mind for future applications or when assisting family & friends with network configurations. Another useful technology!

Have you (or anyone using MoCA) had any issues with it? Seems that would work more reliably than wireless, based on what I have read.

I think otherwise the two units are fairly close. I like the look of the XT8 a bit more (blends in a little better in the living room), but I think both are capable systems and each would be a good choice.