This deal may be eligible for up to 4% cashback at Walmart with Cashback Rewards, a program exclusively for Slickdeals members that enables you to maximize your savings by earning Cashback Rewards Points on select deals found on Slickdeals. Points are redeemable for PayPal credit, gift cards and more. Sign up and start getting paid to shop. 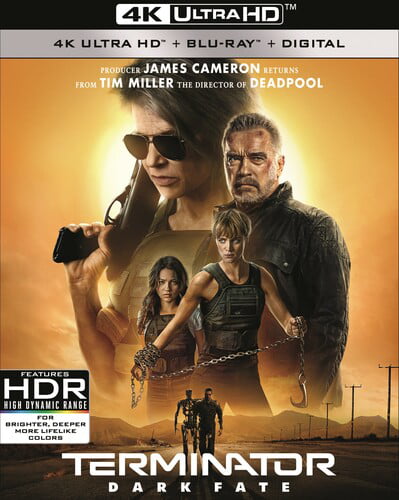 DLS4U | Staff posted this deal. Say thanks!
Add Comment
Reply
in Blu-ray & 4K Blu-ray (5)
If you purchase something through a post on our site, Slickdeals may get a small share of the sale.

0
Reply
This comment has been rated as unhelpful by Slickdeals users
Joined Sep 2013
L3: Novice
104 Posts
30 Reputation
11-29-2022 at 05:58 AM #3
It's really unfortunate that there is no Terminator 4k collection that includes both the discs and digital codes.

This is a good deal

0
Reply
This comment has been rated as unhelpful by Slickdeals users
Joined Dec 2013
L5: Journeyman
757 Posts
81 Reputation
11-29-2022 at 06:58 AM #4
Wish Cameron had directed this. There was a lot of potential and certain elements were solid - it was definitely better than Genisys, which was just an embarrassment - but it lacked the distinct visual flourishes and framing of the Cameron movies. I know as a producer and co writer he apparently butted heads with Tim Miller and disagreed with choices he made… I think Miller should have dropped his ego and trusted the guy who created the best installments of the series and is responsible for the highest grossing film of all time. It just sucks because it was our last chance to see Arnold and Linda in the roles and it didn't quite stick the landing.

Also, the Liquid Metal Terminator concept isn't awe inspiring anymore and it seems like nobody who's made a sequel to this series since '91 really understands that. The special effects in this movie looked like a video game and there was too much of it.

Best thing that could happen to this series would be a gritty, grounded reboot with a modest budget that allows some CGI where needed but returns to the horror thriller suspense vibes of the original movie. The overblown $250mil action extravaganza angle is played out.