I have decided to get back into biking, and ran across this bike on Bikesdirect. It will not be ready until 6 weeks, which is fine.

Carbon usually does not come at the $1k mark and sacrifices in componentry must be made. However, this bike comes with mostly the newest Shimano 105. The brakes are junk, but I can upgrade to Ultegra easily for 100 bucks or so.

To be honest, I would be OK with a steel frame, I like how they feel. I don't like aluminum.

But for this price I might as well grab the carbon fame, a proven design made by Kinesis. 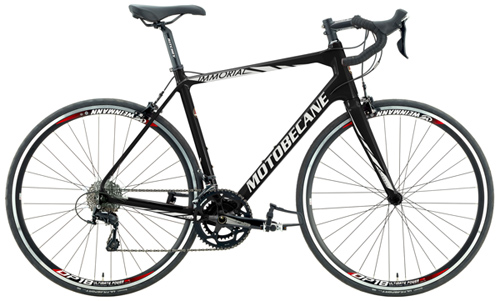 Last Edited by RavenSEAL April 25, 2020 at 01:33 PM
Lot's of better bikes out there for $1000. Even used. Just go on Facebook marketplace or Craigslist and you'll find two year old brand name (Trek, Specialized, Cannondale, etc), full shimano component bikes, even carbon frame bikes for $1000. Meet the person at a local bike shop and have a mechanic inspect the frame and tune components. Congrats, you just bought a bike better than this.
Link to this Wiki
Want more deals like this? Create a deal alert for Sporting Goods.
Add Deal Alert for Sporting Goods

Not to thread-crap (too much), but want to point out some negative points:
1. Price is nice, but not SD relative to general bikesdirect.com pricing in the past for a carbon/105 road bike, especially considering point 2,3,4.
2. Shitty brakes. not 105 crank. (so barely half Shimano 105 group components)
3. not full carbon fork. Based on the description of this fork vs others on the website, the crown and steerer shaft is "alloy". probably aluminum.
4. Not getting this bike until June?!

I suggest the following:

1. $200 more!
2. Same Shimano 105 "level" , but last generation (not sure of the difference, if any)
3. Fork is full carbon.
4. Look at it. This bike looks aero. Even the seat post is aero. In comparison, the Motobecane is plain.
5. Kestrel has some brand recognition, which translates into resale value.

If I were to buy a new road bike now, and have only $1000 to spend on the best road bike, and that would be it, then I would buy yours, but for the future, I would pick the one with a better frame and possibly upgrade later on.

What I actually did several years ago (not recommended...because it was painful) was that I impulse brought a slickdeal posted full 5800 Ultegra group set with Ultegra wheels, waited until Nashbar's Christmas sale and brought a full carbon frame+fork, then over the next many months brought the other stuff (seat, pedals, stem, bar, tape, etc.) from Ebay. The entire bike took a year to put together (I was lazy... had other work and hobbies...I was lazy :-) but ended up with a barely over-16Lbs bike (with tires, pedal, bar tape, 2 bottle holders) for under $1500.

My first bike was from bikesdirect.com, its hard to beat their prices because no service/labor provided. The bike I received was really easy to put together, my 2nd bike was a Giant one from a local bike shop which was already assembled so hard to compare.
0
0
0
0
Reply
This comment has been rated as unhelpful by Slickdeals users
Joined Mar 2013
L2: Beginner
59 Posts
26 Reputation
Our community has rated this post as helpful. If you agree, why not thank ?
04-24-2020 at 04:34 PM #7
At this price point you are putting yourself and society at risk every time you get on your bike. For only eight thousand dollars more, you get a great value with the elite solid gold titanium space bike. /Bikesnob

Sorry for the lazy comment and please disregard. I couldn't resist.
12
0
0
7
Reply
This comment has been rated as unhelpful by Slickdeals users
Joined Sep 2009
L6: Expert
1,178 Posts
161 Reputation
Original Poster

04-24-2020 at 04:36 PM #8
Almost all carbon frames on the market, including the big names are built in Taiwan by Kineses. https://en.wikipedia.org/wiki/Kinesis_Industry

This frame has been built and sold for a while, but I could be wrong. If anyone knows about this particular frame I am all ears. I competed a little and rode bikes for a living 30 years ago. I am new to the modern stuff but have a good idea of what I am looking for.

I want a comfortable road bike that is strong and durable. I want excellent shifting and braking. The plan was to find a steel bike because I far prefer the feel of steel. Way more comfortable and a bit of extra weight is OK as I will be fitness riding, not competing. I weigh 220 lbs and want a touch ticker rim and a 28 or even 32 cm tire. Flat or drop bars both work for me.

I want either Shimano 105 level road derailleurs or I could also live with the SRAM Apex 1-11 or higher. Like I said performance and durability are priorities, but I will also tell you something else: Once you start really getting into biking, weight becomes important. I thought "for a thousand bucks, might as well grab the carbon frame." As long as I can get 28 cm tires on this bike, and swap out the garbage brakes for good brakes, why not get the better bike?
3
0
0
2
Reply
This comment has been rated as unhelpful by Slickdeals users
Joined Aug 2012
L6: Expert
1,403 Posts
207 Reputation
04-24-2020 at 04:37 PM #9
Can you add road bike or similar to the title? Not every is familiar with Motobecane..
0
0
0
1
Reply

04-24-2020 at 04:44 PM #12
Thanks for the useful information! I agree that for your average person, this is not a Slick Deal. They would ride the bike 3 weeks and then leave it in the garage. And of course it probably would not fit, LOL.

I think the deal is pretty specific to my situation, which I just explained in the above 6 post. Also, I only have half the money right now. Amazon/B of A ripped me off on another bike and I need to get my money from them first (long story...BBB is sorting it out).

But thank you for posting the other bike, I will look at it.
0
0
0
0
Reply
This comment has been rated as unhelpful by Slickdeals users
Joined Sep 2009
L6: Expert
1,178 Posts
161 Reputation
Original Poster

If you are a beginner I would recommend a Local Bike Shop (LBS). Most importantly, it must fit. Next, are you good at wrenching on bikes?

You will pay more but probably save in the end.

Bike snobs are......bike snobs. But the reality is, below a certain price point stuff is garbage and just breaks. If you know what you are doing (starting with Internet fitment) and spend a good chunk of time researching you could put together a bike for $400 that could go off road and last. Probably years. However that same bike will run $550 at your LBS.

My wife ran down to Walmart and bought my son a bike for under $300. After 3 months it started breaking and by 6 had completely fallen apart. It is junk not worth repairing. An entry level decent bike like I just talked about can be fixed, and is usually worth fixing.

and trying to find a new hobby. I have seen their videos and they do seem ok to assemble. We were thinking may be one of the Rover 3.0 in small for her. Any suggestions ?
0
0
0
0
Reply
This comment has been rated as unhelpful by Slickdeals users
Joined Sep 2009
L6: Expert
1,178 Posts
161 Reputation
Original Poster

I started studying....spending lots and lots of time researching. Of course I rode everything for 30 years. I was even a bike messenger for 5 years in San Francisco. This means that I know what I want. However, I am 100% new to the world of modern biking, so I have been spending tons of time researching.
0
0
0
0
Reply
Page 1 of 28
1
Join the Conversation
Add a Comment

Exploring High-End Coolers for Summer
Copy Code & Open Site More Deals from
Did this coupon
work for you?
Copy
Link Copied to Clipboard