Slickdeals Forums Deal Talk Bionaire Twin Window Fan, Costco.com, $34.99 + tax until 6/21/20
Advanced Search
Sorry, this deal has expired. Get notified of deals like this in the future. Add Deal Alert for this Item
Frontpage Deal

PuvMan
+84 Deal Score
51,880 Views
Costco Wholesale has for their Members: Bionaire Twin Window Fan for $34.99. Shipping is free. Thanks PuvMan

Note, those without a membership may purchase w/ 5% non-member surcharge.

Written by
Offer valid through 6/21 while supplies last. You may find a lower price for in-store purchase, refer to the forum thread for additional information. -johnny_miller 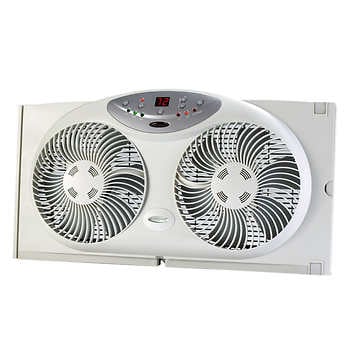 PuvMan posted this deal. Say thanks!

I've been waiting for a sale on this fan - was going to buy a couple weeks ago, searched for a deal, and noticed last time it was posted was 6/17/2019, so figured it would go on sale soon, and sure enough it did.

Historically it looks like there is a slightly lower price in warehouse, but unsure if that applies this time around.

Add Comment
Reply
in Fans (5) Get Costco Wholesale Coupons
If you purchase something through a post on our site, Slickdeals may get a small share of the sale.

I bought two of these Bionaire window fans from Costco in 2009. I use them throughout the spring, summer, and fall and it really helps cool my rooms with fresh air. They turn on when the days are hot and automatically turn off when nights are cool. The airflow is pretty powerful and the motors are quiet.

The thermostat is very helpful. It shuts off the fan when the temperature reaches the set point. BTW, the thermostat can be turned off if you wish to run it on constant.

The remote control is a blessing. It is particularly useful in my living room so that I can turn the fan off as soon as I smell cigarette smoke coming from my neighbor. I can even reverse the airflow if too much of cigarette smell got into my apartment, turning this fan into an exhaust fan.

Thankfully this remote is not one of those credit card type ones with hard to press buttons and tiny watch batteries. This remote is ergonomically designed and its powered by two AAA batteries. I use Eneloop rechargeable ones and they work just fine throughout the hot season. The remote has decent buttons for power/speed, thermostat temperature up/down, airflow direction, thermostat on/off, and dual fan direction in/out/exchange. This remote has a small red LED light that turns on when we press any button. This light will stop turning on when the battery is very low.

The only problem with these fans is that the originals that I bought in 2009 are a little different than the ones that are sold since 2012. Over the years I've purchased five of them. The new ones (since 2012) start with a very high RPM which makes a loud fan noise and within two seconds they slow down to the correct speed. This is fine in day time but at night when we are asleep or trying to sleep, this can be a bit irritating every time the fans turn on with the high-RPM-start.

The originals fans from 2009 didn't have this high-RPM-start problem. Those old ones quietly started at the set speed.

Fortunately, I still have one of the two original fans from 2009. I use it in my bedroom because of it's quiet operation. The newer ones are in my living room.

The other one from 2009 broke because I left it on my window throughout the 2011 winter which made the plastic fan blades brittle and broke off because of my mistake. I should have kept that broken one and just replaced the fan blades because it was an original quiet type. Instead I returned it to Costco and bought a new one which is the louder high-RPM-start type and with very bright LED display.

I have La Crosse weather station in my living room with an outdoor temperature sensor placed on the outside of a closed window. When I notice that the outdoor temperature is hotter than indoors, like typical hot summer days/nights, then I just turn this fan off, remove it from the window, and turn on the AC. Over the years I have become so used to to installing and removing this fan from the window that I can do it with my eyes closed

I wanna be a bionaire, so f***ing bad
buy all of the fans i never had?

0
Reply
This comment has been rated as unhelpful by Slickdeals users
Joined Jun 2013
L2: Beginner
74 Posts
10 Reputation
06-08-2020 at 08:05 PM #15
So my office gets warm from noon to night, due to a 24/7 server and my workstation. But outside is hotter than inside (Las Vegas, 100+ degrees). Would this even help? If I exhaust the hot air and run air conditioning, it'd just exhaust the cool air-conditioned air right?