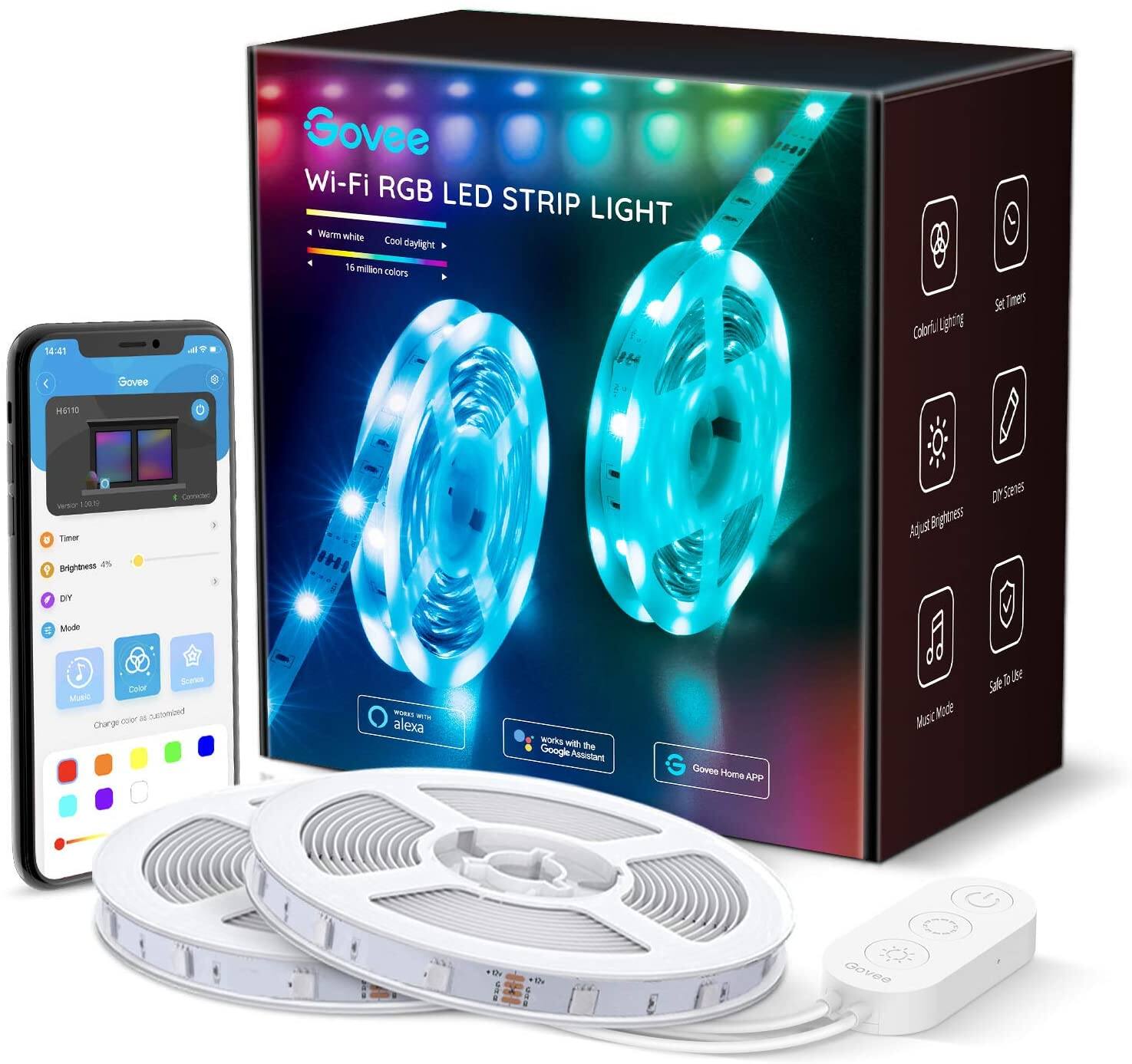 Just FYI, I own a ton of these lights by different manufacturers because I'm obsessed with smart lights.

I have the Govee DREAMColor 5050 LED no-hub WiFi waterproof Alexa/Google Home compatible with App model in both 16.4 ft and 32.8 ft and they have more functions/options than these. They do have a glitch where the rendered or displayed color is different than the custom color selected when using the DREAMColor mode (only sections or blocks are addressable, not the individual led diodes like fully individually addressable lights). For example, if you select a salmon color for one of the DREAMColor blocks, the displayed color will be primary red. Govee is aware of the glitch. It's annoying.

But to offer more helpful and relevant advice about this Govee deal, I've found sets much cheaper, with much nicer lights, with access to the Smart Life App (has a Apple Watch feature which is nice) or the Magic Home App (add music sync, mic sync, and custom color scan/match) instead of the Govee App which doesn't integrate into anything beyond Alexa/Google and has fewer features. The Govee model in this deal is very "standard" for the no hub WiFi variety (no DREAMColor, etc.) and I have a few suggestions which are much better for features and price.

For example, I purchased these yesterday on a Lightning Deal (no time to post the deal unfortunately):


My favorite (non-addressable) Smart strip lights are made by "Hedynshine". The LED diodes have a sort of faceted, domed appearance rather than being flat, clear glass (or flat dull plastic like the cheaper sets) and they give off a clearer, more true-to-life and intense color than the other brands which "should" be identical. When I first purchased them, the listing originally had some language about the color being "ice cream" and special led diodes for a crystallized appearance (especially white). That language has been removed but the lights are still the same. Additionally, the strip itself is significantly higher quality than most of the others (it is thick and covered in a clear, highly reflective/shiny/high grade waterproof plastic) and the adhesive is actually 3M brand and works. The controller and power adapter/brick are both very nice/high quality as well. The power adapter is well within the appropriate wattage/volt range rather than being barely adequate and there no humming or buzzing. These lights are as well-made and consist of materials as high quality as the crazy expensive Hue line and all the rest. These are the gold standard for non-addressable no-hub WiFi smart strip lights.

And finally, this set by Amaneer is only 16.4ft and often goes on sale for a great price (approx $17) which makes them a good choice for someone who only needs one roll (16.4 ft) or who is new to collecting and using smart light strips. You basically pay half to get half . They are identical to the Goadrom set. They are unavailable right now, but I expect they'll be back soon.

Found one for r/choosingbeggars
The TL;DR is:

FYI: Addressable LEDs can also be referred to as "IC" (individually Controlled). Govee uses the term "IC" to denote Addressable (in blocks, not individual diodes) and/or FULLY Addressable (control at the level of Individual LED diodes)

Standard: No fuss no muss. Plug and play. Change color to anything App or Alexa/Google can recognize/interpret. Typically 16 modes/functions are preprogrammed for you. Easy to use and color choices are very good.

DreamColor: Adds some variation. Instead of a single color throughout the strip, you get blocks that can be colored individually and you can incorporate preprogrammed modes to display those blocks you have custom-colored. Basically, you get a segmented rainbow effect that can also perform functions like "chase".

Individually Addressable: Fully customizable in every single way. Create your own effects. The led diodes are individually programmed for color, mode, function, and pattern. You can create elaborate light displays with as few or as many colors as you wish as well as strings of sequences that "play".

Standard: Modes and functions are extremely limited. The entire strip can only be one color at at time, even when in a color fade mode. Custom colors cannot be combined with preprogrammed modes such as color fade. You take what the manufacturer gives you. Typically a 7-color cross fade of mostly primary colors and very limited color choices for other modes. You give up color choice, color mixture, and functions/modes beyond those preprogrammed.

DreamColor: While this does add multiple colors in one single strip, they are in blocks. Additionally, the color blocks can lack full color customization (not 16 million colors but a limited selection) and they are always limited to a certain number of segments in a certain set pattern. The modes/functions incorporating the color blocks are very limited and preprogrammed. Additionally, many DreamColor manufacturers, such as Govee, have a glitch in the color rendering when the user selects highly customized colors for the blocks (non-standard colors that do not correspond to "named" or common hues like magenta, aquamarine, vermillion or the primary colors .... a cream-white-peach hue would be an example). This glitch causes the customized hue to be rendered as the closest primary color, which is an unpleasant result of you wanted soft apricot and the result is fire engine red, burnt orange, or school bus yellow.

Asus.com Forum: Addressable bs Non-Addressable RGB Header (not about led strips per se, but it's informative and there are posts with good info in the thread)
https://rog.asus.com/forum/showth...RGB-Header

I hope this helps. If so, throw some Rep!

still, don't want it. ill wait for the china suppliers to contact me to give it to me for free for good reviews

Also I noticed my sentence was a little weird sounding, it meant to say could have got 2 of them for around the same price to get the same square footage.

Prior to the above they were also selling the outdoor versions for around the same price.

5 Cheaper Alternatives to a High-End Weber Grill You May Not Have Considered
Copy Code & Open Site More Deals from
Did this coupon
work for you?
Copy
Link Copied to Clipboard