Thanks to community member dealtnt for finding this deal.

Written by
Pre-orders will ship in February 2021. Refer to the forum thread for additional information & offer discussion. -johnny_miller 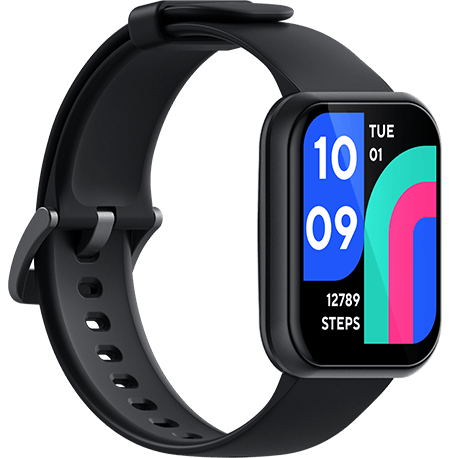 dealtnt posted this deal. Say thanks!

Add Comment
Reply
in Smart Watches & Wearables (4) Get Wyze Coupons
If you purchase something through a post on our site, Slickdeals may get a small share of the sale.

not sure if this is the right place but you can get additional 10 % OFF FRZHM4WLIB
Original text for the coupon code: "The code can be used once by up to 25 unique members of your friends and family before December 12th. It also stacks with almost all of our upcoming holiday promotions."
COUPON refreshed with a new code that works. (Please update status once it no longer works)

Price is awesome!
No microphone or speaker is disappointing (no phone calls, sounds, AI assistants, voice-controlled smart home devices, etc).
Bluetooth - the launch page on their site says it is 5.0, but their FCC filing says it is only 4.0 and that all tests also showed it functioning in the 2Mbps range which is only 4.0 (see Section 4 "General Description of EUT - Product Feature and Specification" section on page 6 of 61 of the "Radio Test Report FCC ID: 2AUIU-WWTCH1"). I'm guessing the 5.0 on their website is actually a typo (They had several others when the page first posted) or they would've updated the FCC filing and run new tests. Screenshots of FCC filing on their forum here: https://forums.wyzecam.com/t/wyze...erofchoice (Why this matters: If it's 4.0 that means it isn't classified as an IOT device, the range is way shorter, it burns battery faster, it's slower, and uses more resources than a 5.0 device would). Wyze has been asked for clarification on the discrepancy, but there was no answer as of this writing so far.
**EDIT 12/21/20 18:30: Wyze employees have affirmed that the Bluetooth for these watches is indeed 5.0, and that the earlier FCC submission listing and testing at 4.0 will be updated. Wyze made a great decision to make that upgrade! It is a significant positive.
No NFC.
Will allow you to use Wyze shortcuts quickly (can't unlock the Wyze lock with it though)
No API yet (ie: can't connect to Sleep as Android or others), but in a recent AMA they said they are working on releasing API's for their devices in the future.
Works with Google Fit and Apple Health
Has an oximeter! But you can only check it manually (not passively/automatically) and only once every 5 minutes at most (confirmed by Wyze in the forum as making this decision to prevent us from draining the battery).
Passive monitoring for heart rate is limited to once every 5 minutes. You can't set it to check more or less frequently (confirmed by Wyze). They said they made the decision to take this choice away from us (to make sure we can't complain about battery life). It will use this to do sleep monitoring.
No local storage.
Functionality is limited when not connected directly to a phone, but it will still do some things (track heart rate, use oximeter, tell time, alarms, etc).
Water resistant (IP68) = effective for limited continuous submersion underwater (most swimming pools), but not high-pressure or for a long time (scuba diving or really deep pools).
Can customize the display, including using pictures
OS = RTOS (confirmed by Wyze)


In short, it's more of a basic fitness band with a big square display, rather than what is normally considered a standard "smartwatch" nowadays. If they open up the API to third parties (in the AMA they said they working on API for their devices), then you could possibly make a little more use out of some of its features (the passive tracking, etc). Still, it is an amazing price, and it looks really nice. This is a great item for some people, and not quite there for others. It totally depends on what you want to use it for, and your own preferences. I'm just posting the FAQ's many people want to know to help make a better personal decision for yourself.
Wyze Watch

Choose your watch size - 47mm/44mm
Super big screen (1.75 inches)
Lightweight aluminum alloy frame
Raise your wrist and tap to control your Wyze ecosystem.
Messaging, weather, music, video, and many more apps!
Water Resistant up to 2 Meters - IP68 Weatherproof rating
Oximeter monitoring - Your Blood Oxygen Level Right on Your Wrist
Heart Rate - Keep an eye on your heart rate from the comfort of your wrist while browsing your trends in the app.
Sleep Monitoring - Rest easy and check your sleep duration, depth, and position once you wake up.
Steps - Keep up the pace and check out your progress using your watch and the in-app tracker.
Menstrual Health Tracking - Check the stage of your cycle, note upcoming dates, and keep track of your menstrual health with Wyze Watch.
No, that's been widely debunked. In fact, the company is refreshingly transparent on some stuff. Many of the devs and product managers will respond directly. There have been a few instances where people have reported some odd network traffic and Wyze has either fixed it or explained it. Most other companies wouldn't even acknowledge the problem, much less respond to it. Wyze isn't perfect, but they do pack a lot of value for such a small price.

This Watch looks interesting but I'm hoping they'll provide more info. It looks like there's no Alexa integration - they had this on the Wyze Band but it was awkward. Also, I'd like to see how much control there is over watch face design and the ability to control/filter notifications. It looks like this is going to be tightly bundled with other stuff controlled via the Wyze app, which could be ok, but one of the major smart home features of that app currently has a huge hole: sensors. Wyze pulled their current lineup of sensors and they've yet to release a replacement. (They worked great for me but other had problems).

Also, they're hyping the O2 saturation monitoring but this is something with unproven accuracy on other devices. Oximetry using a wrist-based sensor is notoriously inaccurate, even on machines designed specifically for this purpose. Unlike the fingertip-based sensors which rely on 2 specific bands of light passing through the skin, the wrist-based sensors rely on light reflecting off the skin, requiring a whole different type of technology. Many no-name, bargain basement watches claim to have built in oximetry (and even blood pressure), but they are wildly inaccurate and unfit for any useful purpose. Also, there's a huge concern that these devices might be accurate in the 90-100 range, which is mostly irrelevant, while being inaccurate in the 70-90% range where it's crucial. Maybe Wyze figured it out, but I'd like to see some details. More info:
https://slickdeals.net/f/14495630-portable-fingertip-blood-oxygen-pulse-rate-monitor-oled-display-home-physical-health-9-99?p=141805466#post141805466

It looks like the Wyze isn't shiping until January (and will probably be +$5-7 shipping). The $30 Amazfit Band 5 seems like the one to beat and it's available now:
https://smile.amazon.com/gp/product/B08DKYLK4D/

Some questions about the device are getting answered here:
https://www.reddit.com/r/wyzecam/comments/k4q7fh/wyze_watch_makes_its_debut_12120/​ [reddit.com]

What does it actually lose over a proper Smasung or Apple watch though? Build quality?

43
Reply
This comment has been rated as unhelpful by Slickdeals users
Joined Jul 2018
WorstPresidentEver
903 Posts
178 Reputation
Our community has rated this post as helpful. If you agree, why not thank ?
12-01-2020 at 11:39 AM #15
The fine print says that you must talk dirty to it at least once per day.

2021 Forecast: Which Tech Products Should You Actually Upgrade this Year?

Review: The Zepp Z Smartwatch is a Sophisticated Underdog That's Worth Your Attention

Apple Watch Sales are Going on Everywhere—Find Deals on Series 6, SE and More

Editor’s Picks: The Best Consumer Tech at CES 2021
Copy Code & Open Site More Deals from
Did this coupon
work for you?
Copy
Link Copied to Clipboard