Slickdeals Forums Deal Talk Pandemic Legacy Season 0 board game with 10% circle and redcard for $59.84
Advanced Search
Sorry, this deal has expired. Get notified of deals like this in the future. Add Deal Alert for this Item
Popular Deal

Pandemic Legacy Season 0 board game with 10% circle and redcard for $59.84

Target price is $69.99 less circle 10% off offer thru Jan 31st and another 5% off with red card. Also free shipping with red card.

Otherwise the price is $62.99 without red card. 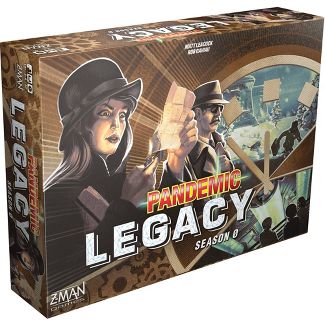 jimkiler posted this deal. Say thanks!
Add Comment
Reply
in Games, Board Games & Card Games (2)
If you purchase something through a post on our site, Slickdeals may get a small share of the sale.

Keep in mind that this is a legacy, that means you need the same 4 people to keep playing this. It took me 2 years to finish my last legacy game because of schedule conflicts.

This comment has been rated as unhelpful by Slickdeals users
Joined Feb 2013
L11: Elite Grand Master
1,983 Posts
277 Reputation
01-18-2021 at 09:04 PM #9
Safe to assume this is related to the board game Pandemic? I've never seen a board game cost $60. Wondering if anyone is willing to give a quick summary of this game and the difference between Pandemic (assuming they're related). We just bought Pandemic a couple months ago and love it, but haven't played many board games before.

0
Reply
This comment has been rated as unhelpful by Slickdeals users
Joined Jun 2011
L2: Learned
2,251 Posts
418 Reputation
01-18-2021 at 09:17 PM #10
Regular pandemic is a single scenario, this is the same style of game but a campaign of scenarios. The game board and mechanics will change over time keeping it fresh. You'll tear up cards and replace them with others, make permanent changes to the board.

Played Clank acquisitions incorporated with a few people and it was a really great game but damn if it didn't hurt tearing up cards. Felt like sacrilege.

0
Reply
This comment has been rated as unhelpful by Slickdeals users
Joined Nov 2018
New User
18 Posts
18 Reputation
01-18-2021 at 09:20 PM #11
This is a "legacy" version of Pandemic. It's a one and done evolving board game with a narrative. You play through it kind of like you would watch a TV series, you make decisions, there are twists, turns, and reveals. You'll be making permanent changes to the game over multiple plays.

I did score Pandemic season 1 for $30 a few years after its initial release but that was the outlier and not the norm. Season 2 I don't think has ever gone that low. So in the shortest way possible what I'm trying to say you should try it out. It does require a dedicated group of at least 2 people.