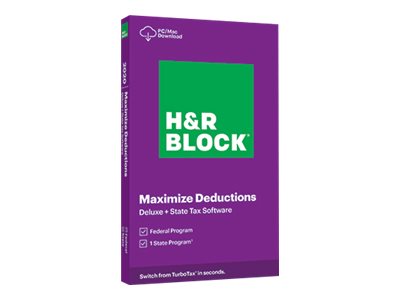 itsokayla posted this deal. Say thanks!
Add Comment
Reply
in Software (7) Get Circuit City Coupons
If you purchase something through a post on our site, Slickdeals may get a small share of the sale.


Try Credit Karma Tax software as well. Its free and works well. As long as you didn't move, you can file your federal and state taxes via CreditKarma.

Credit Karma Tax—is it really free?
Yes! Credit Karma Tax is always 100% free. It's $0 to file both state and federal tax returns. Even if you're taking deductions or credits, it won't cost you a penny, ever.

Starting 01/23/21 Circuit City will ship your order for free.

This comment has been rated as unhelpful by Slickdeals users
Joined Dec 2013
L7: Teacher (far from it)
6,003 Posts
1,459 Reputation
Pro

0
Reply
This comment has been rated as unhelpful by Slickdeals users
Joined Nov 2016
L3: Novice
255 Posts
25 Reputation
Our community has rated this post as helpful. If you agree, why not thank ?
01-22-2021 at 10:17 AM #5
no free shipping, no download option, no guest checkout

0
Reply
This comment has been rated as unhelpful by Slickdeals users
Joined Feb 2013
L337: Ergonomic
262 Posts
184 Reputation
01-22-2021 at 10:36 AM #11
I used H&R last year and I def think that TT is a bit better software in terms of how it imports, lays things out, etc. I got my business taxes done and they seemed ok, but it didn't seem as "good" to me in going into details at least for my business. If you're doing personal with W-4's it's probably no different, but if you're going through all your expenses and deductions with schedule C and more... I might pay 4x as much and go back to TT this year.

0
Reply
This comment has been rated as unhelpful by Slickdeals users
Joined Dec 2018
New User
9 Posts
10 Reputation
01-22-2021 at 10:39 AM #13
Wow, I thought I read that wrong at first with circuit city 🙂 was anyone able to price match at another retailer that actually offers free shipping?

1
Reply
This comment has been rated as unhelpful by Slickdeals users
Joined Nov 2005
L6: Expert
1,025 Posts
463 Reputation
01-22-2021 at 10:41 AM #14
From Wikepedia:
It was reported in January 2016 that the Circuit City brand would be revived as Circuit City Corporation by area retail veteran Ronny Shmoel, who acquired the brand from Systemax.[77][78] Circuit City was originally set to reopen in June 2016,[79] but the postponed relaunch was announced at CES for February 15, 2018.[80] On August 22, 2018, Circuit City Corporation officially relaunched the brand name as an online retailer and announced plans to begin operating as a store-within-a-store chain.

CyberLink Director Suite 6 Review - Is it Right for You?

Save $20 on Razer's First-Ever Ultra-Compact Keyboard
Copy Code & Open Site More Deals from
Did this coupon
work for you?
Copy
Link Copied to Clipboard