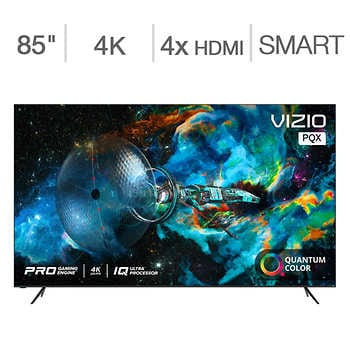 atwc posted this deal. Say thanks!
Add Comment
Reply
in 4K TVs (7) Get Costco Wholesale Coupons
If you purchase something through a post on our site, Slickdeals may get a small share of the sale.

The Vizio gets a lot brighter and looks better for HDR. Checkout the rtings comparison

me too waiting all time for it

0
Reply
This comment has been rated as unhelpful by Slickdeals users
Joined Feb 2008
L9: Master
5,251 Posts
687 Reputation
02-26-2021 at 09:33 PM #8
With larger sizes like this I would go with a Samsung or a Sony IMO. Seems like Vizio has a hard time even making a uniform screen in a 65" size, can only imagine how much DSE this thing has. But I'm sure this thing looks great on paper. If you're dead set on this TV I would wait until a bunch of user reviews come rolling in on this and then decide. There's a couple of reviews on Costco for this TV (mostly positive but don't go into detail much) and a not so positive one on Amazon (mostly complains about upscaling which does suck on vizios - probably even more disappointing on such a large screen). My biggest gripe with Vizio though is their long term reliability.

0
Reply
This comment has been rated as unhelpful by Slickdeals users
Joined Jun 2008
HATES YOU
1,582 Posts
184 Reputation
02-27-2021 at 03:51 PM #14
Use your Costco visa card and buy the $99 allstate/squaretrade warranty at time of purchase and the warranty will be EIGHT YEARS. Then you don't care about reliability. I had a PQ65" a couple years ago that died, and now I have a Sony 75" X900F and it's been great (visio only made 65's at the time). That being said, the PQ was vastly brighter on not just HDR content, but everything in general. I'm probably going to use this as an excuse to upgrade to 85" and get the brightness that I really, dearly miss. The only things where the Sony beats the pants off the vizio are upscaling from 720p or below, and the Sony Android interface is amazing. Vizio's smartcast is really lacking as far as native apps go. You have to cast to it with a device for a lot of things, which means you need an nvidia shield TV or something along those lines to get all the apps and content.

Side by side, the Vizio flat out looks WAY better, brighter, and fancier than the Sony after you get it calibrated and dialed in. If you watch lots of old content and don't have an external device (like the nvidia shield) to upscale, go with the Sony.