Slickdeals Forums Deal Talk 2021 Toyota Mirai (Hydrogen Fuel Cell Vehicle) - LA/SF Only $23108 or less
Advanced Search
Sorry, this deal has expired. Get notified of deals like this in the future. Add Deal Alert for this Item
Frontpage Deal

ExtremeOak
+298 Deal Score
419,193 Views
Select Eligible Toyota Dealers [Dealer Locator] located in Los Angeles / San Francisco, California are offering to Qualifying Customers: 2021 Toyota Mirai Hydrogen Fuel Cell Car + $15,000 in Complimentary Fuel for 2yrs with 0% APR for 72-Months for as low as $23,108 after Incentives and Tax Credits. Pricing and availability may vary depending on your location, consult your local eligible dealership for more information.Thank to community member ExtremeOak for and reddit user XIIXOO for finding this deal. 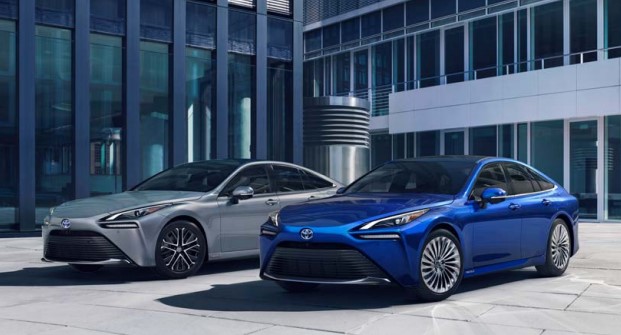 ExtremeOak posted this deal. Say thanks!

Written by Edited March 20, 2021 at 12:06 AM by
Let me start by saying Hydrogen Fuel Cell vehicles are not for everybody. Being that H2 fueling stations are limited, it's really only feasible in the LA / SF area.

I have a 70 mile round-trip commute, and have been casually e-shopping for an electric or hybrid commuter car. But I never found something that that was a) well-priced, b) a worthwhile quality-of-life improvement over my current daily, and 3) charging an EV where I live is possible, but annoying.

My current daily is a 2020 MB Metris cargo van. And while I love it as a hobby equipment hauler, it's just an okay daily. Somewhat noisy, and base model so zero creature comforts to speak of.

If you compare it with $15-19k gas/EV equivalent, those vehicles are probably going to be used, with limited warranty remaining. So, there is additional unrealized operating savings with the Mirai as well.

Insurance and registration are about $100/mo for me. This is decently lower than other $50k luxury brands (per my policy at least), but I'm not including it since it's different for everyone.

Yes, true. But here's the punchline. This car is really freaking nice.

It's not 'dirt-cheap' compared to a used commute econobox, but it's radically cheaper than any other Lexus-like, freeway-autonomous, tech-laden, fully featured and warrantied mid-size sedan.

For the price of this [craigslist.org], you get this [imgur.com].

Sure, it's cheap, but, how is it?
You might be a skeptic like me and think it's a $25k corolla with a $25k water-maker under the hood. But it's not. This is a proper, no-compromise luxury sedan. It almost directly compares with a top-spec, $40-45k Avalon, at least. Reportedly, this car was originally designed to be a Lexus, but brand politics happened.Any negatives?
Not really. It's not a drivers car of course, but it's a solid premium Toyota and delivers exactly what you expect and want. Really, just minor nitpicks:The elephant in the room, Hydrogen stations:

Of course, the 'catch' is that you can only drive this car in the bay area and parts of LA. However, there are a lot of people in both those areas who only use their car for commutes and local city-errands. Within these markets, it's still pretty insane that you can get them that cheap - it's not like I'm the only guy who wants one.

Toyota does also give 21 complimentary gas-car rental days to the purchaser, like electric car sellers do, so people can take road trips if needed. 21 days isn't a *lot* but it's decent value.

At the pumps, it's almost exactly like filling up a normal gas car, sometimes there's a 1-2 car wait but they fill fast and it's not a big deal.

Conclusion:
I check all the boxes: lives and commutes near hydrogen stations, can take advantage of the tax credits, and has another vehicle for trips outside the hydrogen network.

Only time will tell if this thing gives me a bunch of mechanical problems, or hydrogen balloons in price, or some other unknown. But for now, I think it'll work out great.

Is hydrogen the future? Probably not. The only clear benefit of fuel cell vehicles over battery electrics is refuel time, at significant complexity and material costs. But I'm sure hydrogen stations will be around as long as this vehicle lasts. But if I ever replace it, it'll probably be electric.

Station map for your area (California only):
https://cafcp.org/stationmap

Source:
https://www.reddit.com/r/cars/com...ta_mirais/
Add Comment
Reply
in Autos (6)
If you purchase something through a post on our site, Slickdeals may get a small share of the sale.

I'm even using the 1st generation Mirai, for the last 5 years. DM me with any questions!

I've been driving one for the past 5 years, so these are pretty close to real world numbers.

I went to Hamer Toyota and they had balls to mark those up 3k plus 1k gps add-on. Came to $56.5k with no negotiation because stimulus money is here and dealers wants it all. Sad state
Hydrogen Fuel cell is exempt from CA rebate income limits.

"The income cap applies for all eligible vehicle types except fuel-cell electric vehicles."

This comment has been rated as unhelpful by Slickdeals users
Joined Jun 2010
L9: Master
4,233 Posts
673 Reputation
Our community has rated this post as helpful. If you agree, why not thank ?
03-18-2021 at 09:13 AM #4
the catch is hydrogen is not catching on and you can't fill up anywhere. I was waiting and waiting for one of the "planned" hydrogen stations to open near me and eventually gave up this year and bought a plugin hybrid instead.

28
Reply
This comment has been rated as unhelpful by Slickdeals users
Joined Oct 2011
L5: Journeyman
933 Posts
108 Reputation
03-18-2021 at 09:20 AM #6
you can buy Mirai instead of lease only?
thought some of the tax credits have income restriction and are first come first serve until depleted for the year as well?

Apart from joke, are there any stations to fill this up? Don't want to be a Guinea pig here

The media/Tesla have unfortunately shaped the consensus that fuel cells are have no future and thus, infrastructure has been slow to expand, funding may dry up and go directly to BEV related componentry and of course, sales will continue to slow down.

13
Reply
This comment has been rated as unhelpful by Slickdeals users
Joined Oct 2013
L6: Expert
1,422 Posts
152 Reputation
03-18-2021 at 09:55 AM #15
The catch: in 10 years, you wont find hydrogen fuel station anywhere, no one can fix this except toyota if it has mechanical problem, the car will be worth 10% of price you pay tobecause dealerships dont know what to do with it. Or it becomes a collector item