Note: Must be logged in to clip coupons. Coupons are typically limited to one per account. Select locations may have a shopping bag fee included in the total. 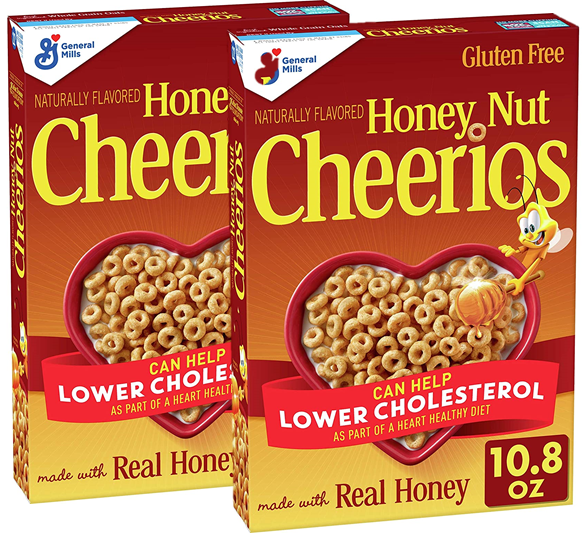 Written by Edited April 11, 2021 at 03:40 PM by
Walgreens [walgreens.com] has select General Mills Breakfast Cereals on sale at 2 for $2.76 when you 'clip' the $1 coupon on the product page and add a quantity of 2 to cart. Select free in-store pickup or ship to store pickup where available.

Note: Coupons are typically one per account. Log into or Register for a myWalgreens Membership to be able to clip coupons (free to join [walgreens.com])Mix & Match 2 for $2.76:About this deal:

Add Comment
Reply
in Breakfast Foods (5) Get Walgreens Coupons
If you purchase something through a post on our site, Slickdeals may get a small share of the sale.

0
Reply
This comment has been rated as unhelpful by Slickdeals users
Joined Sep 2011
L5: Journeyman
509 Posts
245 Reputation
04-11-2021 at 05:09 PM #8
Same, my box expired within a week. It's the same as buying cereal boxes from the clearance isle at the grocery store, which is most likely what these boxes are.

0
Reply
This comment has been rated as unhelpful by Slickdeals users
Joined Sep 2008
L5: Journeyman
684 Posts
68 Reputation
04-12-2021 at 08:19 AM #9
Sad the the non sugar infused version of Cheerios (just regular Cheerios), has nearly 2 oz less in the box than the one with more sugar.

Effectively charging you more for not to have loads of sugar put on your cereal.

This comment has been rated as unhelpful by Slickdeals users
Joined Mar 2014
My Time,Talent,Treasure!!
2,472 Posts
528 Reputation
04-12-2021 at 08:32 AM #10
Yeah but in my experience I've noticed that even 6 month old expired cereal still tastes just fine. Also typically those are just for best freshness use or best by dates not actual expiration dates.

Fun fact some countries its illegal to put a expire dates on food products because of the amount of food waste it does. They make the consumers verify if the products are good or not by taste, smell, etc. Btw I am also Serve Safe certified in food handling.

0
Reply
This comment has been rated as unhelpful by Slickdeals users
Joined Dec 2017
L4: Apprentice
439 Posts
35 Reputation
04-12-2021 at 09:10 AM #12
Image enlarged to show Genetically Modified Organism.
100% oat with frog DNA to give you that natural coat of slime to prevent dry skin!

"What constitutes a genetically modified organism (GMO) is not always clear and can vary widely. At its broadest it can include anything that has had its genes altered, including by nature. Taking a less broad view it can encompass every organism that has had its genes altered by humans, which would include all crops and livestock. In 1993 the Encyclopedia Britannica defined genetic engineering as "any of a wide range of techniques ... among them artificial insemination, in vitro fertilization (e.g., "test-tube" babies), sperm banks, cloning, and gene manipulation." The European Union (EU) included a similarly broad definition in early reviews, specifically mentioning GMOs being produced by "selective breeding and other means of artificial selection." They later excluded traditional breeding, in vitro fertilization, induction of polyploidy, mutagenesis and cell fusion techniques that do not use recombinant nucleic acids or a genetically modified organism in the process.
...
The definitions focus on the process more than the product, which means there could be GMOs and non-GMOs with very similar genotypes and phenotypes. This has led scientists to label it as a scientifically meaningless category, saying that it is impossible to group all the different types of GMOs under one common definition. It has also caused issues for organic institutions and groups looking to ban GMOs. It also poses problems as new processes are developed. The current definitions came in before genome editing became popular and there is some confusion as to whether they are GMOs. The EU has adjudged that they are changing their GMO definition to include "organisms obtained by mutagenesis". In contrast the USDA has ruled that gene edited organisms are not considered GMOs."

Read: just about anything we consume today is, in broad terms, a (product of a) GMO.

0
Reply
This comment has been rated as unhelpful by Slickdeals users
Joined Feb 2017
L2: Beginner
45 Posts
10 Reputation
04-12-2021 at 03:02 PM #15
Tried signing into my on account on the computer, wouldn't let me. Signed in on the app and ordered two boxes. Half an hour later I get a message saying out of stock. Cancelled. Tried to use a different Walgreens. coupon not available

How to Save Money for Beginners

Is Sam's Club Plus Level Membership Worth the Cost?
Copy Code & Open Site More Deals from
Did this coupon
work for you?
Copy
Link Copied to Clipboard