serra
+6 Deal Score
6,047 Views
Stay in the Magic! Walt Disney World Resort properties is offering up to 25% off peak Summer stays on most nights. The number of rooms allocated for this offer is limited. Savings based on the non-discounted price for the same room. Length of stay requirements may apply.

Staying on property does not guarantee admission to the theme parks. You must have a valid ticket with a theme park reservation to enter.

This offer is valid for the Disney Resort hotels listed below:

Important Details
Additional per-adult charges may apply if more than 2 adults per room at Disney Value, Moderate and Deluxe Resorts and Studios at Disney Deluxe Villa Resorts.
Advance reservations required.
Cannot be combined with any other discount or promotion.
Offer excludes the following room types: 3-bedroom villas, Cabins at Copper Creek Villas & Cabins at Disney's Wilderness Lodge, Bungalows at Disney's Polynesian Villas & Bungalows, The Little Mermaid Standard Room at Disney's Art of Animation Resort.
Valid admission and a park reservation are required for the same park and same day to enjoy theme parks and special events and are not included in this offer.
Resort hotel reopening dates are subject to change. 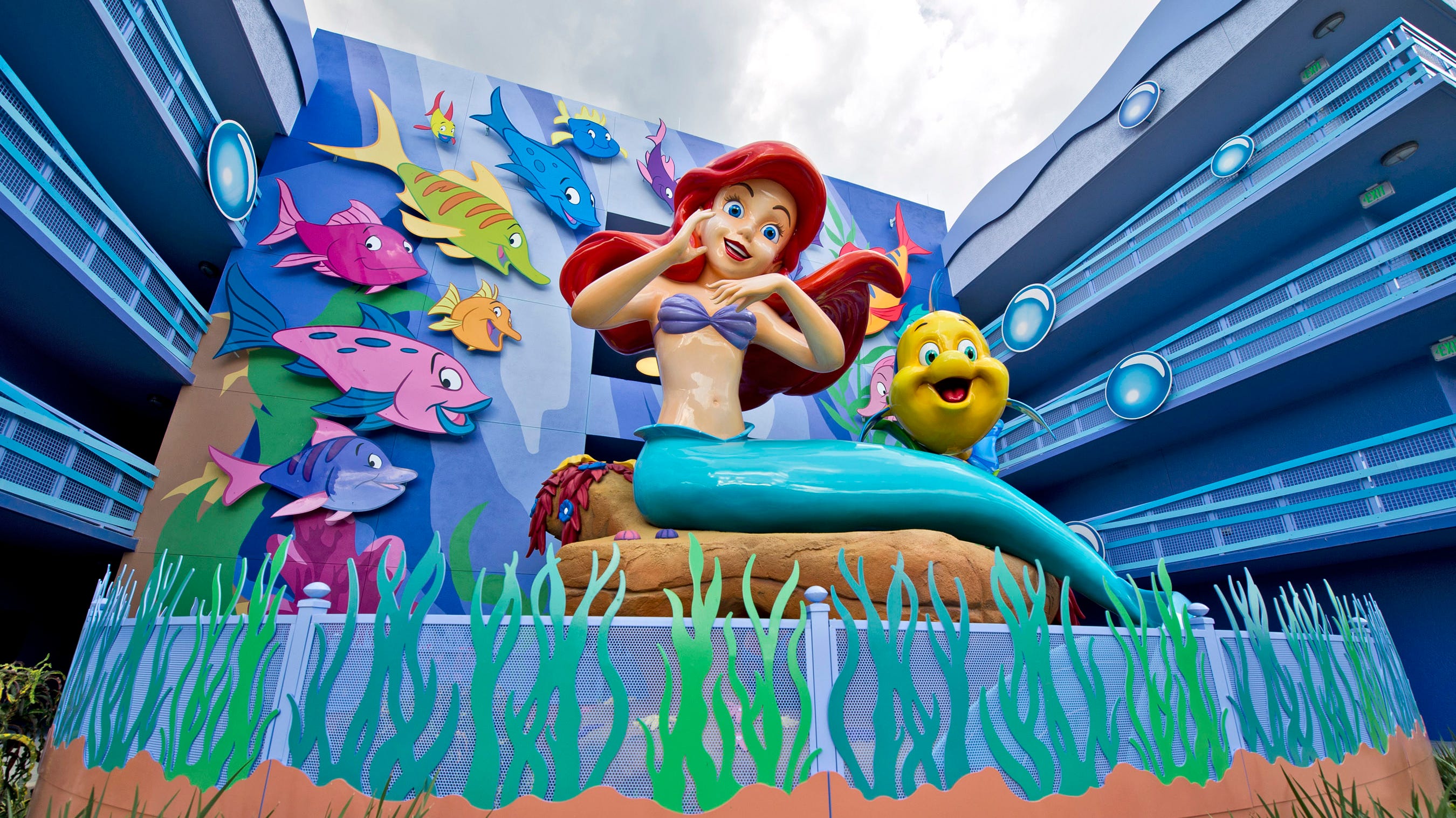 serra posted this deal. Say thanks!
Add Comment
Reply
Created 05-03-2021 at 10:06 AM by serra
in Travel & Vacations (3)
If you purchase something through a post on our site, Slickdeals may get a small share of the sale.
Deal
Score +6
6,047 Views
See Deal
About the OP
Send Message
Pro Staff Deal Hunter
serra@slickdeals.net Joined Jul 2004 Slickdeals Moderator travel promotions & deals
24,116 Reputation Points
0 Deals Posted
0 Votes Submitted
76,886 Comments Posted

They never are. Not that I'm a huge Disney traveler but any time I've been there the resort and tickets are separate. Sometimes they will bundle them but the discount isn't much even then.

If you're going anyway, that's fine but I can't imagine being there in July-Early Sept timeframe. We were there a few weeks ago and I'd say that while the climate was good for most of the time, when it starts to hit mid-80's with humidity it starts to become unbearable. Both my wife and I commented to each other how being there in the summer would be murder. Average temp in July is ~ 92F with 100% humidity = heat index of 137F!

While I am sure things will change in the next 3-6 months, in early April some rides and stores/food were closed, while they were also @ ~ 1/3 capacity (park). They got rid of Fastpass (doesn't make sense if your intent is to limit people in groups) except for rider swap (and probably other gimmes). Highest wait time in any of the parks was for one of the Avatar rides @ 70min. Most were 20-30min depending on the time of day. you also had to preregister for your park days (due to limited capacity) which makes planning difficult as you can't plan around bad weather. Ride lines may look long but basically what they've done is reduce the snaking that's indoors and instead put it outdoors so you'll see huge snaking lines everywhere when in fact they aren't really that long. Some ride operators seemed to care about the 6 foot markers whereas most didn't, nor did most park-goers. Absolutely zero character interaction except sporadic floats/parades from afar, unless you do a dining experience and the characters just dance through the restaurant.

They've also taken the opportunity to do a lot of remodeling. Epcot, mostly the area around the sphere was all walled off and impossible to get around - you have to go on huge detours to avoid all the construction. also no fireworks, etc. Our resort did have a lame-ass boat parade light show every night. Operating hours are limited and shifted around. For example MK was 8-8 whereas Epcot was 11-11pm.

The other thing that was interesting is that ALL the parks tended to open well before the official opening - 1+ hr - and not just "we'll let you in the park and then you wait at a rope inside" kind of crap, but actually waiting in line for rides. The apps wouldn't work for wait times until the official park opening time though.

Temp checks were quick and easy. They'll insist you wear a mask but they don't keep track of it and they won't harass you about it. My 7yo daughter always had hers slip down below her nose and occasionally a cast member would remind her but then you move on, they're not chasing you around the park. No need to wear masks for photos. Of course I imagine all that will change .

Guess I can get the discount and maybe get a deal on tickets separate ....

You can get another 8.8% off if you have a Discover card and BJ's membership (up to $1500 spend per card through the end of June) if you buy Disney GC and use that for payment. Otherwise BJ's offers the best flat discount for GC purchases ($500 GC for $480).

Will look at that now. Thanks

Discover has 5% this quarter at wholesale clubs which amounts to 8.8% off of $456 for a $500 GC [even if you have the BJ's card which gives a % back off purchases it doesn't apply to gift cards]. And, you can use them anywhere. You can even load them to your resort balance so that purchases made in park go right off the balance. I brought $1k with us (on top of booking the entire trip on GC's) and burned it on mostly food/drink in about 3 days.

what sucks though is you CAN use them for food (they emphasize online ordering and some places are online ordering only) however the app does not save the card details so you wind up having to type in the info every time. Also, app ordering does not go against your resort account like a magicband would, so in that case you're stuck entering the card all the time.

0
Reply
This comment has been rated as unhelpful by Slickdeals users
Joined Dec 2013
L3: Novice
233 Posts
59 Reputation
05-03-2021 at 01:42 PM #12
What part of the county did you travel from? Im curious cause my wife refuses to visits Disney Wold in July because of the heat. My argument to my wife is who better to get alklamated to Florida heat than travelers from Georgia.

Seriously heat index of 137? No thanks, I don't care where you live that's farking hot to be walking around on blacktop all day (making it even hotter).

My wife always says "we should move to FL and get season passes" Yeah they don't have snow but they also spend 3 months a year running to and from AC.

Biggest Travel Credit Card Deals and Bonuses: Up to $1,250 in Free Travel and More

How I Booked a $4,500 Trip for Two With Points
Copy Code & Open Site More Deals from
Did this coupon
work for you?
Copy
Link Copied to Clipboard