Note, Includes 90 Day Cuisinart Warranty with 1-year extended warranty auto-added to cart along with the oven.

Thanks to Slickdeals Deal Editor iconian for posting this deal.

This deal may be eligible for up to 2.5%* at BuyDig in Slickdeals Rewards (Cashback) via the Slickdeals Extension 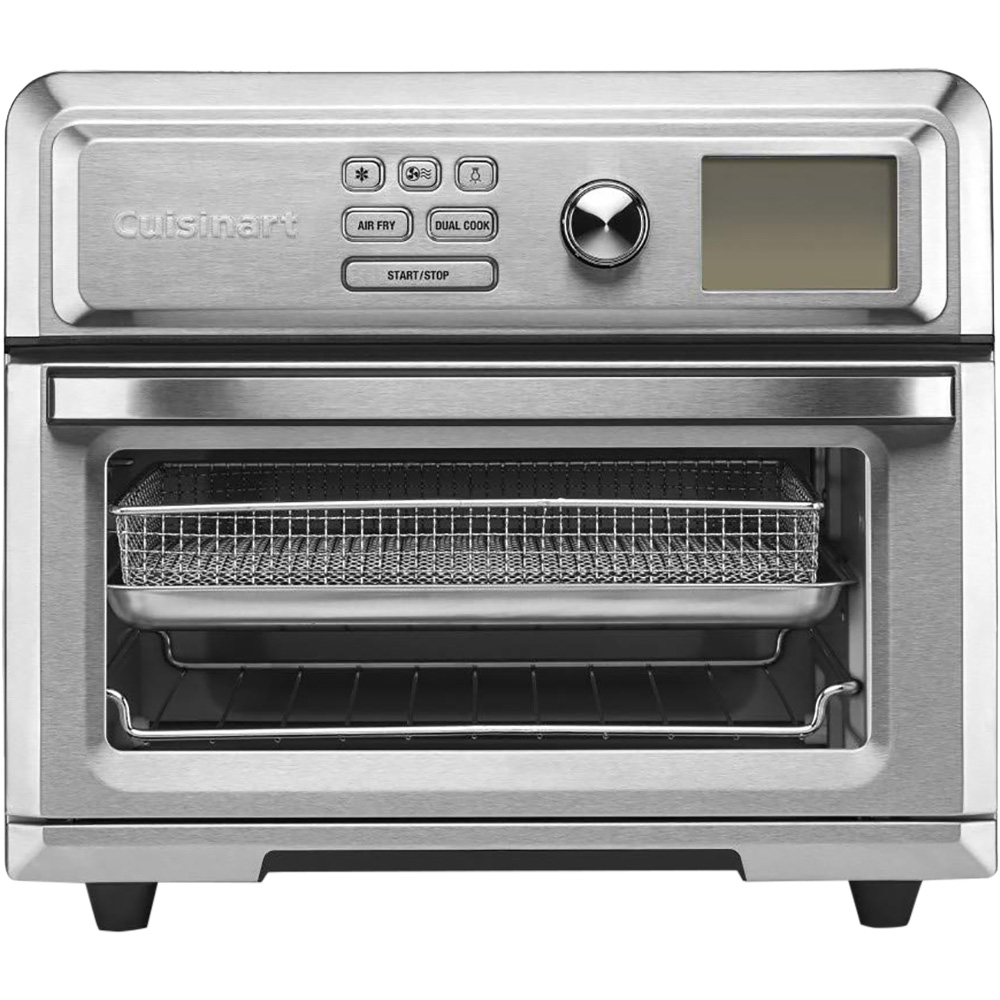 Add Comment
Reply
in Air Fryers & Deep Fryers (5) Get BuyDig Coupons
If you purchase something through a post on our site, Slickdeals may get a small share of the sale.

0
Reply
This comment has been rated as unhelpful by Slickdeals users
Joined Apr 2012
L5: Journeyman
517 Posts
479 Reputation
06-03-2021 at 11:03 AM #33
I got this new from Costco awhile back. It hasn't been my favorite toaster oven due to temperature inaccuracies (food will cook much faster than times listed on boxes- you've been warned!) but it's been overall ok and we do use and like the air fryer option.

I'd guess there are better options in this price range but if you need something now- don't hesitate.

0
Reply
This comment has been rated as unhelpful by Slickdeals users
Joined Dec 2016
L2: Beginner
99 Posts
14 Reputation
06-03-2021 at 11:55 AM #34
I like this, it's my first air fryer. All I needed was a toaster oven but I'll never go back now.
Packaging for food doesn't list times for convection ovens or air fryers usually, but you can use traditional oven instructions as a reference point. For a lot of things I just go 25F lower and the same time.

Clearanced at Costco, as in a open box item? Not sure ever saw anything like that at the store.

0
Reply
This comment has been rated as unhelpful by Slickdeals users
Joined Dec 2019
New User
1 Posts
10 Reputation
06-03-2021 at 03:03 PM #36
It wasn't open box. But, it was different than the other cusinart digital air fryers that were at the store. There was just one left for $120, but it was bigger and more advanced than the other ones.

0
Reply
This comment has been rated as unhelpful by Slickdeals users
Joined Sep 2014
L3: Novice
419 Posts
135 Reputation
06-03-2021 at 03:41 PM #37
I own one of these. Bought brand new from Costco about 6 months ago. It is nice, BUT somewhat less convenient than a traditional air fryer (getting the tray in and out requires use of a pot holder, basket/tray can be a pain to clean with certain foods, buttons/menus are a little confusing). Still, I can definitely recommend. The final cooked product that comes out of this unit is almost always perfect, and the tray/basket is dishwasher safe.

This comment has been rated as unhelpful by Slickdeals users
Joined Dec 2019
New User
3 Posts
10 Reputation
06-03-2021 at 04:41 PM #38
This is now $119.99 from dealparade on eBay [ebay.com] with the standard Allstate 2 year warranty for certified refurbished items. I checked eBay before placing my order with BuyDig yesterday but the best price was around $160 yesterday.

My order from BuyDig is already shipped so I'll pass on the eBay deal but hopefully someone else can benefit. The return shipping cost on this is probably not worth the difference.

paraphrasing:
not accurate, nor easy to clean. That being said, I'm a HUGE fan, and this air fryer is (somehow still) a game changer
doesn't get as crispy as others but best SD purchase ever, would recommend
heats 50 degrees more than others (seriously? that's a YUGE difference), knob has issues going in one direction. makes making selections very difficult. racks difficult to clean, while changing or canceling options during cooking is very difficult and non intuitive. "Despite all that it is actually a good useful product."
Ordered one to replace my old Cuisinart toaster oven that has a broken knob (despite the fact that both are made by the same company).
doesn't get good results as oven, burns most of what i bake, "not sure if it keeps accurate enough temperature or maybe it gives off too much radiant heat." Would buy this again if it broke
I use foil cause racks are a little difficult to clean and even tho it tends to burn or overcook food, love mine.
knob is terrible, button sticks "and just generally goes crazy. I also agree the drip tray sucks but foil was fine." it works great
similar model broke after lasting a WHOLE TWO YEARS! but i expect this one to be a good upgrade
(My personal favorite) it makes really bad noises, so much so it had to get replaced (I'm so lucky the for-profit corporation who made this faulty product actually honored their own warranty; how generous of them!) yet the new one STILL makes noises, and occasionally have to unplug then plug it back in or "hit it on the side until the noise stops"... overall i really like the oven, it's awesome..

and the one poster w/ a similar model who dares to disagree w/ the fanboys by giving it negative reviews got 3X more dislikes than likes (initially I gave him a thumbs up then went to change it but for some odd reason, Slickdeals won't let me). this thread sounds like a support group for stockholm syndrome...

0
Reply
This comment has been rated as unhelpful by Slickdeals users
Joined Dec 2013
L2: Beginner
81 Posts
30 Reputation
06-08-2021 at 08:34 PM #45
Returned it to Costco and bought the ninja foodi.
its a lot wider and shorter, so its great at cooking pizzas and thin foods, but your not going to cook a chicken in there.
Decide what you cook and if its not "tall" food it's great!
cookies come out perfect, pizzas and fries take a little longer than the cuisinart but way better end product.