Amusing Ourselves to Death: Public Discourse in the Age of Show Business (Kindle eBook) $1.99

What happens when media and politics become forms of entertainment? As our world begins to look more and more like Orwell's 1984, Neil's Postman's essential guide to the modern media is more relevant than ever.

"It's unlikely that Trump has ever read Amusing Ourselves to Death, but his ascent would not have surprised Postman." -CNN

Originally published in 1985, Neil Postman's groundbreaking polemic about the corrosive effects of television on our politics and public discourse has been hailed as a twenty-first-century book published in the twentieth century. Now, with television joined by more sophisticated electronic media—from the Internet to cell phones to DVDs—it has taken on even greater significance. Amusing Ourselves to Death is a prophetic look at what happens when politics, journalism, education, and even religion become subject to the demands of entertainment. It is also a blueprint for regaining control of our media, so that they can serve our highest goals.

"A brilliant, powerful, and important book. This is an indictment that Postman has laid down and, so far as I can see, an irrefutable one." –Jonathan Yardley, The Washington Post Book World 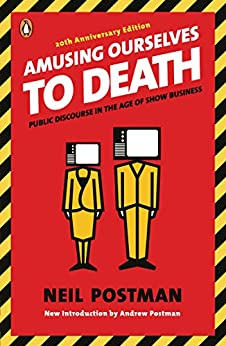 phoinix posted this deal. Say thanks!
Add Comment
Reply
in eBooks (2)
If you purchase something through a post on our site, Slickdeals may get a small share of the sale.
Deal
Score +5
2,007 Views
$1.99
See Deal
About the OP
Send Message
Expert Pro
Joined Dec 2010 L8: Grand Teacher
11,490 Reputation Points
2,453 Deals Posted
2,696 Votes Submitted
3,021 Comments Posted
Don't have Amazon Prime? Students can get a free 6-Month Amazon Prime trial with free 2-day shipping, unlimited video streaming & more. If you're not a student, there's also a free 1-Month Amazon Prime trial available.

This comment has been rated as unhelpful by Slickdeals users
Joined Jan 2010
L4: Apprentice
443 Posts
56 Reputation
06-15-2021 at 08:16 AM #2
This is a fantastic book I would recommend highly, although the description is misleading: Postman worries more about a "Brave New World" future in which we are amused to death rather than the overtly totalitarian system of 1984.