Thanks to community member ikjadoon for finding this deal. 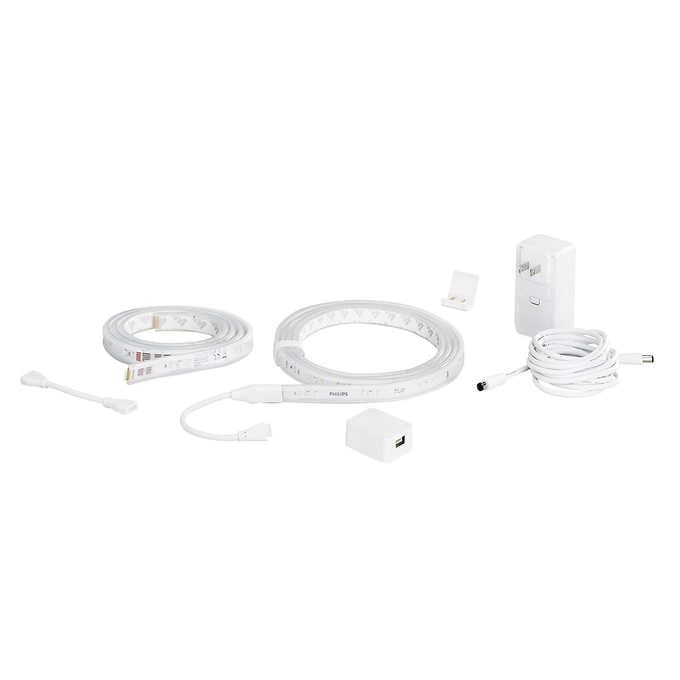 ikjadoon posted this deal. Say thanks!

This deal matches the all-time low and is slightly better than the most recent deals.

You do NOT need a hub: it can work with just Bluetooth. But, it has the most features / integrations if you have the Hue Bridge. Product pages for more details:

Lightstrip Plus base V4 80 inch [philips-hue.com]

Add Comment
Reply
in Lighting (6) Get Costco Wholesale Coupons
If you purchase something through a post on our site, Slickdeals may get a small share of the sale.

Costco is rounding down; you can check the model number. It is the 80" base with the 40"extension bundle. Phillips Hue does not sell a "6.0 ft" nor "3.0 ft" variant of the updated 2020 Bluetooth models. This is the same length as all other Bluetooth models.

Thus, to Costco's credit, Phillips is actually rounding up a bit misleadingly.

0
Reply
This comment has been rated as unhelpful by Slickdeals users
Joined May 2020
L3: Novice
108 Posts
94 Reputation
Pro

06-21-2021 at 03:05 PM #36
1. Brightness. Those 50ft are probably about the same total lumens as this wiz strip (~1600 lumens or a bit more with the extension), and that's not an exaggeration. However, you won't find the lumens listed by those (mostly Chinese) strips on Amazon because it makes them look bad. Also, how many places in your house do you have 50ft continuous feet to place LED strips?

2. Hue has better CRI. Again, you won't find low quality strips listing this. You can look up what CRI is. This is related to the quality and range of wavelengths (ie colors) the strip can produce. Also having multiple white light sources is a clear signifier. The absolute worst strips will just mix red, green and blue LEDs do produce a funky looking white. (For cool LED bulbs it's just blue LEDs with yellow phosphors to produce white - try holding a cheap led flashlight or possibly your phone flashlight very close to a white piece of paper and you will be able to distinguish the blue and yellow) Better strips add one or more additional white LEDs to produce a range of color temperatures with better CRIs.

3. Hue has better color purity/range. Red is more red, green more green, blue more blue and everything else in between. This is the same concept that applies to color spaces/gamut's you see discussed for pc monitors. For a visualization, google "chromaticity diagram." Hue strips have a wider triangle and thus more possible colors, and more saturated colors at the edges of the triangle.

As far as 1-3 go this is directly related to the quality of the LEDs themselves. The material that produces the light is GaN and the method in which is grown (via metal-organic chemical vapor deposition) is extremely complex, and some companies are much better at it then others. Hue is spun out of Phillips (Lumileds is the main LED division) who has been in the LED game since near the beginning (multicolored LEDs weren't even invented until the mid 90s). LEDs are complex materials with wide a wide range of properties. Think of steel for comparison; Chinese steel or "Chinesium" is often thought of as significantly lower quality than American-made steel, but they're both steel. Textiles are also a great example.

5. Some people worry about the security of these questionable strip companies on their WiFi.

Also I just want to give some advice that LEDs, even the shitty ones, have such long lifetimes that they are essentially buy-it-for-life products as long as you handle them properly. You'll throw it away, break it, lose it, or replace it with something better before they actually die 99% of the time.
Just like bedding, lighting is not one of the things in life you should skimp out on. You will look at these lights every day, and their quality can affect how you feel and perform throughout the day.

1
Reply
This comment has been rated as unhelpful by Slickdeals users
Joined May 2020
L3: Novice
108 Posts
94 Reputation
Pro

Same parent company as Hue. I have strips side-by-side and color-wise I don't know if I can really see a difference. Brightness is also same. Wiz in this deal is 2(ish?) times the length, maybe more - I think Hue products are sold in inches/feet while Wiz are sold as meters, and I think Costco is doing some weird rounding to make things more confusing.
So hardware-wise I'd say they're pretty damn close in terms of light-output performance metrics.
Hue works better software-wise via Zigbee. More options, color transitions are noticeably smoother, all your lights will turn on exactly the same time. This one of the benefits of having the hub to act as a brain.

Wiz can still look great though, maybe with a little extra time and tinkering with scenes and routines etc to get everything to work how you want it to. Compared to other WiFi strips I've used from Amazon, I find Wiz to be a lot easier to work with. Personally I use Hue in the rooms I spend the most time in (bedroom and living room) and use Wiz everywhere else.

0
Reply
This comment has been rated as unhelpful by Slickdeals users
Joined May 2021
L2: Beginner
42 Posts
68 Reputation
Pro