Note that the Surf Green guitar is backordered but is available to reserve now. You will not be charged until the item ships. 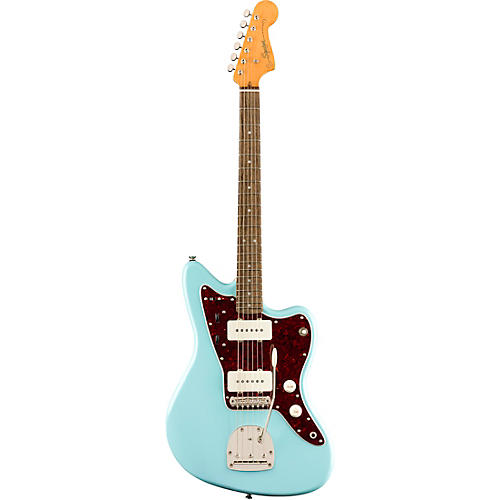 xlnc posted this deal. Say thanks!
Add Comment
Reply
in Guitars (5) Get Musician's Friend Coupons
If you purchase something through a post on our site, Slickdeals may get a small share of the sale.

It's been a long time since I owned a Squier. (Off white late 90s affinity, back when squiers were junk.) Worst case, I can sell it locally around cost if things don't work out and I want to dump her.

0
Reply
Last edited by milkysunshine June 26, 2021 at 05:57 AM.
This comment has been rated as unhelpful by Slickdeals users
Joined Jan 2012
L3: Novice
101 Posts
18 Reputation
06-26-2021 at 07:26 AM #4
I debated picking one of these up and while researching I came across a Fender TVL signature Oxblood MIM Jazzmaster that someone just happened to be selling in mint condition on Reverb for $1000 plus shipping. It was posted 18 minutes after I found it on Reverb and I bought it within the hour. So this post helped reignite my search to find the guitar I'd been eyeing for a couple years now. And at a reasonable price. So the deal is still slick for me but in a different way. So thank you to whomever posted it !

0
Reply
This comment has been rated as unhelpful by Slickdeals users
Joined May 2013
L2: Beginner
38 Posts
119 Reputation
06-29-2021 at 07:36 AM #5
I have a Squier Vintage Modified Jazzmaster that's similar to this, and I can attest that these are GREAT guitars. They are extremely comfortable and fun to play, as well as excellent mod platforms. I've replaced the pickguard, tone caps, knobs, and pickups on mine as well as shimmed the neck - maybe $60 worth of investment - and it's a serious sleeper guitar. I actually replaced the bridge with one of these newer, improved Classic Vibe Mustang-style bridges since they are better than most for the price and quite similar to Staytrem.

0
Reply
This comment has been rated as unhelpful by Slickdeals users
Joined Jan 2021
New User
2 Posts
10 Reputation
06-30-2021 at 10:09 PM #7
Bought this deal and they sent me a obviously used broke guitar. Musicans friend is a joke!

0
Reply
This comment has been rated as unhelpful by Slickdeals users
Joined May 2020
New User
10 Posts
07-03-2021 at 11:15 AM #8
I received one of these (in Daphne Blue) on Wednesday, and very I'm pleased with the guitar and think the price is a great deal, but everyone should be aware that you will probably not receive a brand-new guitar from Musician's Friend, you will instead receive an opened, previously touched, and repackaged guitar from a Guitar Center.

To be clear here, when I say "brand-new" I mean in a Squier-branded box that was never opened since the factory, and including all the warranty cards, wrenches, and extras from the factory. This is what every other online music store considers "brand-new" and this is NOT what you'll be getting.

Anyway, I received a generic cardboard box from a Guitar Center in Johnston City, NY (as the return address), with the guitar very well wrapped in bubble-wrap, and the only "extra" was the tone-arm. The shrink-wrap is still on the pick-guard and vibrato and the guitar was playable and reasonably set-up. (These will never be set-up well from the factory, as .09 strings are too small for Jazzmasters without neck shims.)

This isn't an isolated instance with this Jazzmaster, but it was much better than what I've received previously. I received a D'Angelico "deal" from them last year that was clearly a return or badly treated demo-gear with damaged neck-binding, the bridge completely unplayable (as in couldn't even be tuned up), micro-scratches and finger prints all over the thing (like a toddler had been handling it). If you get a dud like that, you can call up Musician's Friend and ask about returning it. They'll either cut you a discount, or let you return it free-of-charge within 30 days (which is also the legal remedy for Fraudulent Misrepresentation, which is how I think they're able to get away with this crap). YMMV.

All of that out of the way, I think these Classic Vibe Jazzmasters are pretty great value for the money, and especially if you get a good-condition demo guitar for $100 off like this. Most of the specs are true to original Jazzmasters (with real Jazzmaster style pickups) and comes with an upgraded Mustang bridge and a the nut is actually made of bone. You will definitely need to clean the fret-board (all of these reviewed online and mine came with some kind of gray wax on them) and like with all Jazzmasters the guitar will absolutely need a set-up (nut filing for string preference, and possibly a neck shim if you use strings smaller than 12's and like the action low).

All of this said, I would definitely steer away from the Surf Green guitars that aren't "in stock" - that means Guitar Center is waiting for someone to return a Surf Green guitar, then you'll get *that* one. At least with the in-stock Daphne Blue, it seems more likely the actually guitar sent to me was a relatively-unplayed floor model pulled off the wall at the at the Johnston City, NY guitar center. Again, YMMV.

Thanks for coming to my Ted Talk.

NFL SUNDAY TICKET STUDENT is back!! $96