Adorama.com has select Klipsch Reference Premiere Speaker Bundles on sale for $2,199 each. Shipping is free. 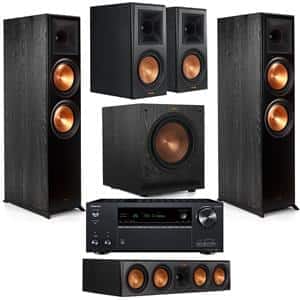 Written by Edited August 9, 2021 at 11:17 AM by
Klipsch Reference Premiere Speakers @ Adorama
Add Comment
Reply
in Home Theater (6)
If you purchase something through a post on our site, Slickdeals may get a small share of the sale.

Yay! I personally think you're going to love these. Klipsch use similar 'Horn-loaded' designs in their speakers and the regular Reference ones you had previously ordered are known for being a bit overly sharp and displeasing. The step up RP line post here is supposedly much smoother and more pleasurable

Also I totally agree with the poster above you: value is relative. But to add these also carry higher resale value in the long run as well in case you change your mind; each RP speaker usually goes for 2x their regular Ref counterpart when being sold (can't guarantee that about the sub though).

Anyways, for expansion you have a couple of options. The package above is currently a 5.1 and the receiver is capable of supporting up to:

The second number represents subwoofers, up to two in either configuration.

You should look the configurations up to get a better idea if these numbers and terms seem foreign to you!

But you have a ton of options as you can see and depending on what you want, there's a lot you can factually do (I won't comment on disputed things like highly upgraded cables) to improve these speakers.

For both music and cinema, relative cheap and immediate improvements are:
> Before buying anything, remember to optimize how your speakers are positioned (I'd highly recommend reading the manufacturer's manual) to maximize their efficacy
> Add bass traps (cheap and diy options are much less expensive) in your room. It will even out the bass response. Your room is very important and literally the other half of the equation. You want to minimize bouncing sound waves and reflections and resonation and all that.
> Depending on your floor material you'll see different effect here, but a subwoofer decoupling/isolation platform.

More expensive upgrades:
So first, I'd start with taking advantage of Dolby atmos and buying ceiling speakers. Honestly speaking, while theoretically you should "timbre" match (aka buying similar speakers from the same company so the speakers have the same sound signature and when everything is blending together into surround sound, it's more immersive and cohesive), I find that the most important speakers in order are Left & Right and Center for timbre. The rest while important aren't as noticeable if you get speakers from a different line unless you get something totally different. For surround stuff since it's usually for cinema only, more channels with low-mid cost speakers > less channels with mid-high cost speakers.This preface is because you can either buy some cheap in-ceiling speakers right away, some nicer in-ceiling speakers, or even these little speakers that Klipsch sells that sit on top of your speakers and bounce atmos of the ceiling.

Now whether you want 5.2.4 or 7.2.2 is up to you, but I think you'll see far more success with 5.2.4 especially in the coming future especially as the 2 rear ceiling speakers you get in 5.2.4 can also kinda masquerade as what would have been the rear channels you get in 7.2.2.

While the subs IMO are extremely important, they can get expensive. Height or more surround channels are cheaper to get.

If you want more bass, you have two options. When you get the sub in the package and if you find that the bass response is lacking (not as potent, not as crisp, or not as fast), then consider either swapping the klipsch sub to a more powerful subwoofer (subwoofers don't need to be timbre matched, that is you don't have to only buy klipsch Subs for klipsch speakers) OR if the bass seems inconsistent around the room and loud enough in some areas but weak in other, getting a second identical sub. The advantage of 2 subwoofers is similar to the bass traps, they help even out the bass response in the room. The way sound waves work, you might see large volume differences in low, mid, and highly frequencies in different parts of the room and two subwoofers not only add a bit more rumble and low end but vitally they even out the bass response. A pair of subs cancelling out (in very basic and inaccurate terms) the bad parts in a similar way to pulling both left and right on something makes it go nowhere and in this case you want that zero effect so the bass is even everywhere in the room. Now if you're just looking for better low end for something only like explosions or gunshots, it might be more worthwhile to simply pick up one bigger sub but you're going to have to do the research to see which option is best for your situation. You could just get two bigger badder subs 😂. Better subs don't necessarily mean bigger though. Bigger subwoofers (beyond 12") generally move more air but it's a blessing and a curse because if built poorly, they can be sloppy. Anything 15" and above usually is relegated mainly for cinema. Ported designs give you more upfront bass all the way around whereas as sealed subs sacrifice a lot of the kick to keep the lowest frequencies more even. But it ultimately does depend on subwoofer to subwoofer but my point being a well engineered 12" sub can be much better than your cheapest 15" sub so unlike the surround speakers where it's okay to cheap out a bit, this isn't the place.

One final thing you can do that meaningfully impacts everything but can be expensive addition with limited improvement depending on how sensitive you are, is buying separate amplifiers for your front left and right speakers, giving them access to more power in front and letting the receiver divvy up what was initially allocated to the left and right speaker to the other channels. Klipsch is known for doing well with any power source and this is mainly for if you ever change your front speakers. This last recommendation is what I meant in my earlier post by anything more expensive than the RP line starts requiring far more money and complexity (of wiring) for a noticeable effect.

Oh and side note, the source of your content and what format (I.e. streaming vs 4K Blu-ray) plays also matters but I'll leave that to you to research as this affects the video a lot more than the audio IMO for cinema. For music, the debate over music formats (Analog vs digital, and some debate inside digital formats itself) is still raging and you're again starting to enter audiophile territory where every minutia is something that needs to be analyzed and expensively improved to be enjoyed—just to be clear this is sarcasm but my point is for music what improvement is best and worthwhile becomes highly opinionated.

Okay finally after the great text wall of China, just enjoy your speakers! The RP line is already an amazing upgrade over 98% of the speakers most people listen to and should be fantastic for a long time. I really hope you like them!!

Power ratings on AVR's are super confusing. This AVR will not output 100watts x 9. The amplification power is often limited by the power supply in these receivers. Don't worry though, this receiver has plenty of power to run these speakers.
I used to like Onkyo a lot but I understand they're still having quality control issues and may be going out of business.

Also, the 504c and 600m reference premieres are on sale if this package doesn't meet your needs.

That's per each channel.

Also, the 504c and 600m reference premieres are on sale if this package doesn't meet your needs.

0
Reply
This comment has been rated as unhelpful by Slickdeals users
Joined Sep 2018
L2: Beginner
80 Posts
26 Reputation
07-17-2021 at 10:12 AM #9
Amplifier specs are very misleading. It says in the description you linked only 100 watts 2 channels driven and 220 watts driven in 1 channel. These companies use balogny stats like these to trick you. To the ops question yes these will do just fine with the speakers and get plenty loud but if I had to guess with all channels driven the watts are more like 80 watts for lcr and 40-50 watts for the rest if all channels are being used.

This comment has been rated as unhelpful by Slickdeals users
Joined Jul 2019
L6: Expert
1,194 Posts
99 Reputation
07-17-2021 at 10:18 AM #10
Yeah, you aren't getting 100w into all the channels with 5 speakers. But they're 96-98 db sensitivity speakers, so you need literally 1 watt to get to 96+ db. ~30-50 watts per channel will get these speakers to reference level from a reasonable listening distance. The AVR should be able to put that out to 5 channels. Plus you likely don't listen at reference.

Neither receiver can do 7.2.4 even with an external amp and I probably would have also wanted to sell off the bookshelves and sub so I guess I don't feel too bad.

2
Reply
This comment has been rated as unhelpful by Slickdeals users
Joined Nov 2013
L2: Beginner
56 Posts
14 Reputation
07-17-2021 at 10:39 AM #14
Power ratings on AVR's are super confusing. This AVR will not output 100watts x 9. The amplification power is often limited by the power supply in these receivers. Don't worry though, this receiver has plenty of power to run these speakers.