Slickdeals Forums Deal Talk A Game of Thrones (A Song of Ice and Fire, Book 1) (Kindle eBook) $2.99
Advanced Search
Sorry, this deal has expired. Get notified of deals like this in the future. Add Deal Alert for this Item
Forum Thread

Winter is coming. Such is the stern motto of House Stark, the northernmost of the fiefdoms that owe allegiance to King Robert Baratheon in far-off King's Landing. There Eddard Stark of Winterfell rules in Robert's name. There his family dwells in peace and comfort: his proud wife, Catelyn; his sons Robb, Brandon, and Rickon; his daughters Sansa and Arya; and his bastard son, Jon Snow. Far to the north, behind the towering Wall, lie savage Wildings and worse—unnatural things relegated to myth during the centuries-long summer, but proving all too real and all too deadly in the turning of the season.

Yet a more immediate threat lurks to the south, where Jon Arryn, the Hand of the King, has died under mysterious circumstances. Now Robert is riding north to Winterfell, bringing his queen, the lovely but cold Cersei, his son, the cruel, vainglorious Prince Joffrey, and the queen's brothers Jaime and Tyrion of the powerful and wealthy House Lannister—the first a swordsman without equal, the second a dwarf whose stunted stature belies a brilliant mind. All are heading for Winterfell and a fateful encounter that will change the course of kingdoms.

Meanwhile, across the Narrow Sea, Prince Viserys, heir of the fallen House Targaryen, which once ruled all of Westeros, schemes to reclaim the throne with an army of barbarian Dothraki—whose loyalty he will purchase in the only coin left to him: his beautiful yet innocent sister, Daenerys. 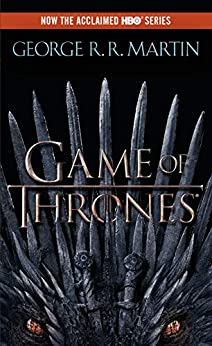 phoinix posted this deal. Say thanks!
Add Comment
Reply
in eBooks (2)
If you purchase something through a post on our site, Slickdeals may get a small share of the sale.

07-25-2021 at 12:34 AM #3
If you buy this, know that the series will potentially never be finished (at least by George R. R. Martin). I recommend The Expanse instead if you want a long, epic series (it's not $3 like here though). That said, the book is still a good read according to most reviews. [goodreads.com]

0
Reply
This comment has been rated as unhelpful by Slickdeals users
Joined Dec 2016
L2: Beginner
50 Posts
30 Reputation
07-25-2021 at 02:44 AM #4
There's no chance in hell RR is ever going to finish the series and that's fine because after the last season no1curr.