Target is hosting their Target Car Seat Trade-In Event and offering a 20% Off Coupon (valid for a new car seat, stroller or select baby gear) when you trade in your old car seat w/ Target Circle at any participating Target locations or when you follow the instructions listed below.

Thanks to community member dshop for finding this deal

Note, offer will require a Target Circle account to redeem your unique 20% off couponUse your trade-in coupon on a new car seat, stroller or select baby gear 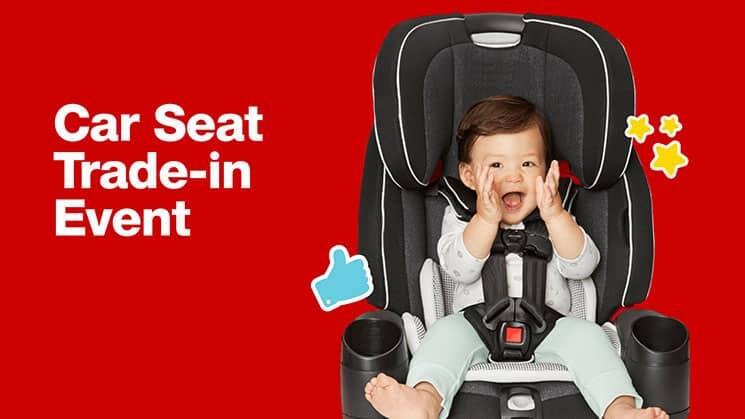 dshop posted this deal. Say thanks!

Target is hosting their Target Car Seat Trade-In Event and will accept Any Car Seats to be Recycled and In-Exchange, guests will receive a 20% Off Coupon good for the purchase of a New Car Seat, Stroller or select Baby Gear valid at any participating location from September 12 to September 25.

Last Edited by zeta September 20, 2021 at 07:08 PM
This post can be edited by most users to provide up-to-date information about developments of this thread based on user responses, and user findings. Feel free to add, change or remove information shown here as it becomes available. This includes new coupons, rebates, ideas, thread summary, and similar items.


Link to this Wiki

jackbauer-ctu asked this question on 09-14-2021 at 04:44 PM
09-14-2021 at 05:18 PM
No. I brought a bunch just just get rid of some and you scan the barcode at the donation area so it's only a one time thing. Unless you and another family member with a different account scan it. Honestly you don't really have to turn in anything. Open up Target App and scan barcode and your done. Coupon added to you Circle.
Expert
09-14-2021 at 05:36 PM
I believe you can create multiple Target accounts to scan multiple bar codes.

Basically, there's zero evidence that carseats actually *expire*, or perhaps zero real world data to show that after some period of time, the safety of seats declines due to the materials.

CR goes on to justify [washingtonpost.com] the 6-7 yr "expiration" as indicating safety standards and technology evolves. That might be a reason to replace a seat, but not that existing seats are inherently bad.

The closest I can find to an answer is a guy that lives in a country where there is a thriving second-hand carseat market (apparently):

Is there any data that says secondhand car seats aren't safe? [marketplace.org]

Sweden has some of the best and strictest child safety seat laws in the world. And they've paid off: child auto fatalities have been reduced to almost zero.

I figured that if anybody could give me an honest, data-driven answer to the question of whether used and expired child safety seats are dangerous, it would be a Swedish regulator. So I contacted Maria Krafft, the director of traffic safety and sustainability at the Swedish Transport Administration, who years ago had blogged in favor of used car seats and where to buy good ones in Stockholm. Krafft referred me to Professor Anders Kullgren of the Karolinska Institutet and the Chalmers University of Technology, as well as the longtime head of traffic safety research at Folksam, one of Sweden's largest insurers. During the early 1990s, Folksam even manufactured its own line of child safety seats. If used car seats are a hazard, Professor Kullgren would know. He shared his thoughts via email:

We have the same experience in Sweden. Manufacturers of child restraints (and other safety equipment such as bicycle and motorcycle helmets) tell their customers to buy a new product after a certain period of time, often relatively short. We can't see any evidence to justify that from what we have seen in real-world crashes.

The email continued, touching on Folksam's past as a seat manufacturer:

We still have some seats stored at Folksam that have been used. We have not seen any changes or problems with the plastic material in those seats for this 20–30 year period of time.

That's not data, but it's more than what the world's biggest car seat manufacturers and Target are willing or able to reveal.

And regarding the comparisons of leaving lawn furniture outside for years? Unless you're rocking a convertible, carseats don't see nearly the same amount of abuse; heat and cold cycles, yes, but not UV exposure which I'd say is the #1 reason for plastic degradation; carbon black and other compounds are added to inhibit UV damage. Also, most lawn furniture is RPVC (same as your window casings, molding, vinyl trim is made out of) and particularly susceptible to degradation. As I mentioned previously, carseats (the actual plastic seat, not the belts or covering) are generally HDPE, the same resin as milk jugs and the same resin (type, perhaps not specific grade) as Little Tykes lawn toys. They might fade, but I can't say I've had one crumble on me and I have stuff that's 20 years old, sitting out in direct baking sunlight all day, or frigid temps in the winter.

I'm not arguing against replacing seats, but I hate it when someone pisses on my leg and tells me it's raining. Let me evaluate the data and make my own choice - don't come up with bullshit excuses.
QR and terms attached. Hope it works for everyone.
It's funny but when someone says last year I still think Of 2019. 2020 is like the forgotten year.

This comment has been rated as unhelpful by Slickdeals users
Joined Jan 2005
L2: Beginner
29 Posts
18 Reputation
08-29-2021 at 10:51 PM #4
Anyone know when the Walmart one is happening? They straight up give you gc rather than a coupon. They had one last year and it was a success

0
Reply
This comment has been rated as unhelpful by Slickdeals users
Joined Mar 2008
L5: Journeyman
510 Posts
120 Reputation
08-29-2021 at 11:41 PM #12
Anyone know what restrictions there are on the coupon if any? Usually I see the Graco 4ever seats are excluded from any coupons.

08-30-2021 at 03:01 AM #15
For Target you only need to scan the coupon code to add it to Target Circle offers. You don't actually need to trade anything in. There a box at the front with a QR code and no one is there to check anything. At least, that's how it worked the last few times.

Adidas Fall Sale: Up to 50% Off + Free Shipping for Members