"Pratchett . . . has a satirist's instinct for the absurd and a cartoonist's eye for the telling detail."
—Daily Telegraph (London)

Sam Vimes, watch commander of Ankh-Morpork, is at long last taking a much-needed (and well deserved) vacation. But, of course, this is Discworld®, where nothing goes as planned—and before Vimes can even change his cardboard-soled boots for vacationer's slippers, the gruff watch commander soon finds himself enmeshed in a fresh fiasco fraught with magic, cunning, daring, and (for the reader more than for poor Vimes) endless hilarity. Did he really expect time off? As Vimes himself says in Feet of Clay, "there's some magical creature called 'overtime,' only no one's even seen its footprints." Following the New York Times bestselling Unseen Academichals, Terry Pratchett delivers an enthralling new tale from a place of insuperable adventure: Discworld.

Discworld® is a registered trademark. 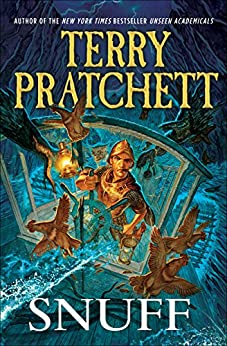 phoinix posted this deal. Say thanks!
Add Comment
Reply
Created 09-11-2021 at 12:36 AM by phoinix
in eBooks (3)
If you purchase something through a post on our site, Slickdeals may get a small share of the sale.
Deal
Score +11
4,767 Views
$2.99
See Deal
About the OP
Send Message
Expert Pro
Joined Dec 2010 L5: Journeyman
4,494 Reputation Points
362 Deals Posted
641 Votes Submitted
568 Comments Posted
Don't have Amazon Prime? Students can get a free 6-Month Amazon Prime trial with free 2-day shipping, unlimited video streaming & more. If you're not a student, there's also a free 1-Month Amazon Prime trial available.