Slickdeals Forums Deal Talk The Story of Marvel Studios: The Making of the Marvel Cinematic Universe $90 + Free Shipping
Advanced Search
Sorry, this deal has expired. Get notified of deals like this in the future. Add Deal Alert for this Item
Frontpage Deal

The Story of Marvel Studios: The Making of the Marvel Cinematic Universe EXPIRED

Thanks to Community Member SuperheroFamilyMan for finding this deal. 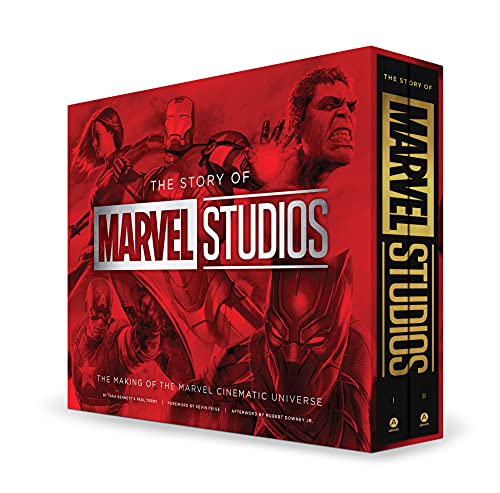 SuperheroFamilyMan posted this deal. Say thanks!

Written by Edited October 23, 2021 at 03:47 PM by
The Story of Marvel Studios: The Making of the Marvel Cinematic Universe

New release this week, 40% off retail!

The definitive story of how Marvel Studios created the Marvel Cinematic Universe, as told by the studio's creatives, and the cast and crew of The Infinity Saga

The Story of Marvel Studios is the first-ever, fully authorized, all-access history of Marvel Studios' creation of the Marvel Cinematic Universe, as told by the producers, writers, directors, concept artists, VFX artists, cast, and crew who brought it to life. Year-by-year, project-by-project, the studio's founding and meteoric growth are described through detailed personal stories, anecdotes, and remembrances of noteworthy challenges, breakthrough milestones, and history-making successes. Together, these stories reveal how each of the films evolved into one ongoing cinematic narrative, as coauthors Tara Bennett and Paul Terry ( The Official Making of Big Trouble in Little China, 2017) chart the complete production history of The Infinity Saga's 23 movies (from 2008's Iron Man all the way up to, and including, 2019's Avengers: Endgame and Spider-Man: Far From Home).

Bennett and Terry were granted unprecedented access to Marvel Studios, which led to this years-in-the-making tome containing personal stories from more than 200 interviews, including every Marvel Studios producer; MCU writers and directors; the stars of The Infinity Saga; concept artists, costume designers, composers, and the talents behind the MCU's dazzling visual effects; and more. Featuring previously unpublished behind-the-scenes photography and archival production material, as well as personal photos and memorabilia from cast and crew, The Story of Marvel Studios is the essential, collectible chronicle of how the Marvel Cinematic Universe was brought to life.

• 512 pages chart the entire history-making story of Marvel Studios—from its inception, through Phases One, Two, and Three, and to the dawn of Phase Four

• Featuring more than 200 interviews with the studio's staff, cast, and crew for all 23 movies in The Infinity Saga

• Includes more than 500 production photos, plus never-before-seen filmmakers' archival materials and personal memorabilia from the cast and crew

Lol. Who would pay for this? Maybe $20...
Someone should buy this for the DC universe execs
They got delayed because of covid. Why would Marvel be scared one movie when Infinity War and Endgame probably made more money than all DCU movies combined?

1
Reply
This comment has been rated as unhelpful by Slickdeals users
Joined May 2010
L3: Novice
143 Posts
48 Reputation
10-23-2021 at 03:08 PM #4
Fantastic! So strange that they would drop the price right after release on this. I feel bad for all the fans who pre-ordered.

13
Reply
This comment has been rated as unhelpful by Slickdeals users
Joined Dec 2006
L3: Novice
159 Posts
24 Reputation
10-23-2021 at 03:49 PM #6
Apparently the pre-order price originally was $90. I think the book may have been different too in the beginning pre-orders (focused on just the first 10-11 years maybe), but I may be wrong about that

2
Reply
This comment has been rated as unhelpful by Slickdeals users
Joined Jun 2007
L2: Beginner
92 Posts
19 Reputation
10-23-2021 at 08:23 PM #12
Just an observation but most of the older "Marvel Art of…" books sell for well over their original retail price. Been collecting some over the years but there are a few first prints that are well over my price range. I would see this as a bit of an investment

Can You Still Use Makeup If It's Expired?
Copy Code & Open Site More Deals from
Did this coupon
work for you?
Copy
Link Copied to Clipboard