aks5476
+8 Deal Score
7,682 Views
York Barbell has a 300lb weight set with olympic barbell and collars on sale for $399 plus tax, shipping and handling. If you live in DE, MD, or PA, you can select local pick up to avoid the shipping cost. There is still an $11 handling fee. Seems like a good deal if you live in the area. I'll be picking mine up Dec. 15th. There's a weight lifting hall of fame at the outlet store location, so might make the trip worthwhile. They also supposedly have a "dents and scratches" section at the store, I might try to pick up some other stuff while i'm there.

Only thing I can't speak to is the quality of the equipment. It's hard to find reviews, but google has generally positive reviews on the outlet store. York Barbell has a supposedly long history of making quality equipment in the past, but I've heard it is not made in the US anymore. If anyone else has experience with their equipment, feel free to chime in. I'm giving the 300lb set a shot as a starter set for my home gym.

Link below to their black friday sale flyer, which says in store only but all of these prices appear to be online now as well: 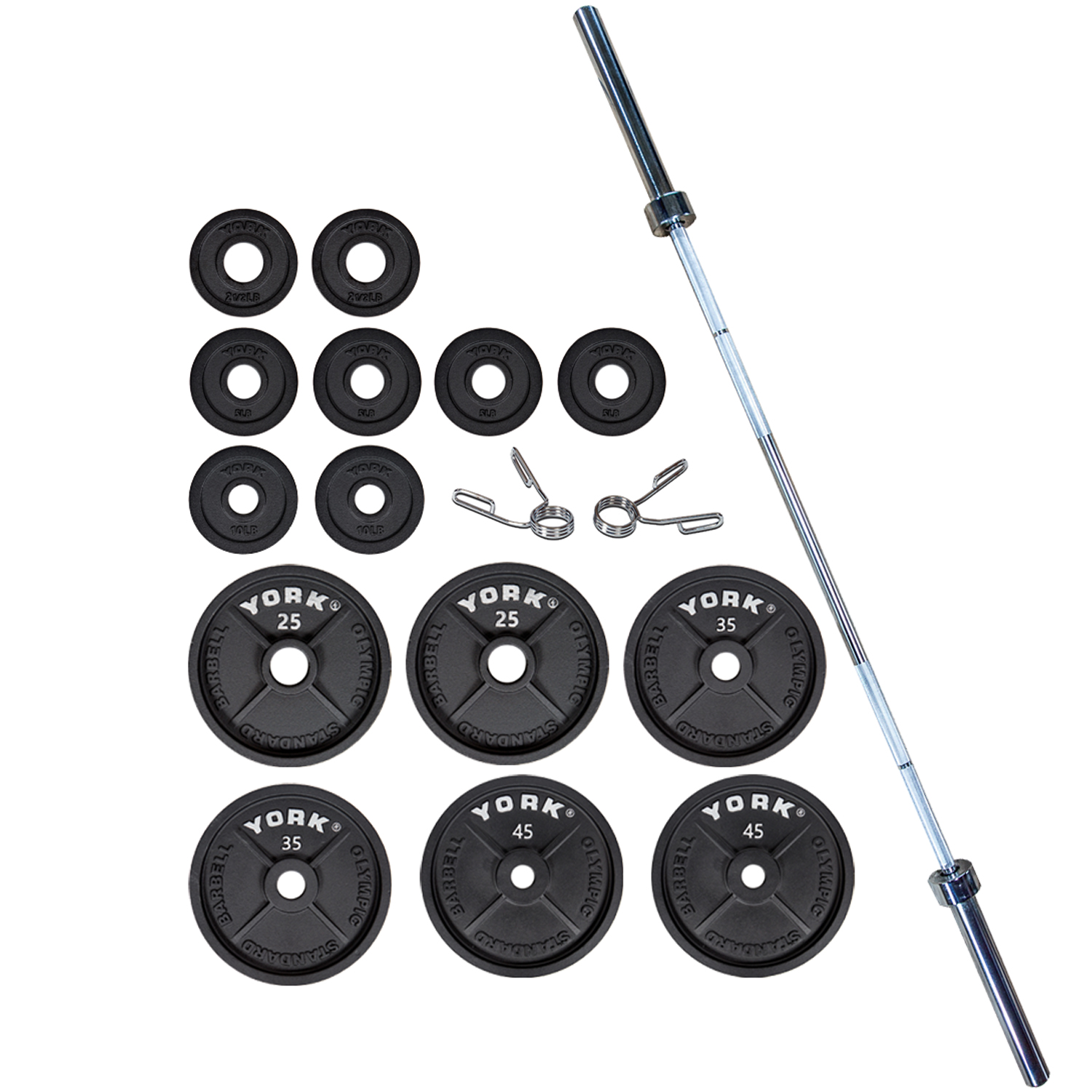 aks5476 posted this deal. Say thanks!
Add Comment
Reply
in Fitness & Wellness (3)
If you purchase something through a post on our site, Slickdeals may get a small share of the sale.
Deal
Score +8
7,682 Views
$399.00
See Deal
About the OP
Send Message
Joined Oct 2020 New User
14 Reputation Points
1 Deals Posted
6 Votes Submitted
5 Comments Posted

11-27-2021 at 09:03 AM #4
I went for this and not some of the other deals for that same reason, the crappy barbells. It sounds like this set actually comes with a decent barbell:

"The York Barbell 7' Olympic Barbell features high quality North American made steel. This bar has a 1000lb weight limit and a 28mm/1.125" bar diameter. Combine that with 15 3/4" sleeve lengths and you are set to load up your weights and start hitting your own personal records."

The bar with the dick's set or some other sets are basically throw aways. This York bar looks like something you could start out with and actually get some miles out of.

If the Dick's set is $350 now, I may actually consider that as I just moved and had to sell the one I had. But I've also been seeing weights for $0.90/lb consistently on FB marketplace around here; just been waiting for a price that would potentially beat that, but I don't think I'm going to anytime soon

Believe it or not, weight is not weight.

3
Reply
This comment has been rated as unhelpful by Slickdeals users
Joined Dec 2015
L2: Beginner
27 Posts
14 Reputation
11-27-2021 at 02:51 PM #8
I have the Dicks Fitness Gear set and yeah, the 45s are smaller than normal. You'd be doing deficit deadlifts with them. I ended up getting a bumper set for deadlifts and use the Fitness Gear set for all other stuff. Having grips is very handy.

The barbell is okay. I upgraded to Titan's basic $100 economy bar though and it's leagues better.

11-27-2021 at 06:15 PM #9
Your comparing apples to oranges if you say the fitness gear is a better deal. Ive read that the barbell comes brand new with rust inside the bushing, the plates are poorly milled and can actualy cut your hands with sharp metal imperfections. I saw a Cap set on sale from amazon and reviews complained that the metal coating on the barbell flaked off shavings and cut their skin like fiberglass. I think this is a higher quality option for a complete set.

1
Reply
This comment has been rated as unhelpful by Slickdeals users
Joined Jun 2017
L2: Beginner
52 Posts
26 Reputation
11-27-2021 at 08:36 PM #10
Maybe so. I'm just saying, for a ~beginner to intermediate lifter (which is clearly who these sets are aimed towards) the Dick's set was great for me. No rust or sharp corners or whatever; the weights were super solid and the bar was fine. It worked fine, and for a stellar price (back then - seems everything has doubled since, but...) I didn't know the plates might've been underweight, that's weird, but it still helped me progress a little in the 2 years I owned it.

Anyway aside from all that, I'm also pointing out the bulk of the cost of these sets is for the plates themselves. And as far as that goes, weight pretty much is weight. To the point where, in fact, I'm still pretty disappointed at ALL the "deals" I've seen so far, since none of them have even managed to beat the very common $0.90/lb rates I've seen locally through craigslist or whatever. So, if the bars, or what have you, on these cheaper sets really suck that much - you'd probably be better off sourcing some cheap old plates off CL and getting a decent $100 bar like someone said above. Which is what I'm starting to think I might just do. Unless you really need your weights to all style-match, or something like that..

1
Reply
This comment has been rated as unhelpful by Slickdeals users
Joined Aug 2011
L2: Beginner
70 Posts
34 Reputation
11-27-2021 at 09:21 PM #11
I think you are confusing the Fitness Gear and Weider sets. I have a couple of Fitness Gear plates and despite being smaller than my other 45 lb plates, I often grab them first as they are easy to grab and I also like using them for other excercises like back raises where it is easier to grab a couple. I have never weighed them individually so I have no idea what the tolerance is.

11-29-2021 at 10:22 PM #14
Any experience with their equipment? This will be my first purchase from them but i might plan on buying more stuff from them if the quality is good.

10 Target Shopping Tips That Will Save You Money

8 Ways To Score Free Stuff from Amazon
Copy Code & Open Site More Deals from
Did this coupon
work for you?
Copy
Link Copied to Clipboard