phoinix Expert
+33 Deal Score
8,873 Views
From the New York Times bestselling author of The End of Faith, a thought-provoking, "brilliant and witty" (Oliver Sacks) look at the notion of free will—and the implications that it is an illusion.

A belief in free will touches nearly everything that human beings value. It is difficult to think about law, politics, religion, public policy, intimate relationships, morality—as well as feelings of remorse or personal achievement—without first imagining that every person is the true source of his or her thoughts and actions. And yet the facts tell us that free will is an illusion.

In this enlightening book, Sam Harris argues that this truth about the human mind does not undermine morality or diminish the importance of social and political freedom, but it can and should change the way we think about some of the most important questions in life. 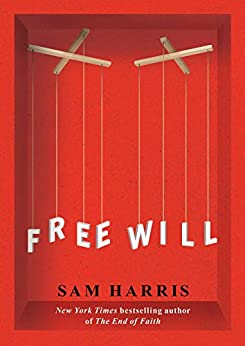 phoinix posted this deal. Say thanks!
Add Comment
Reply
Created 11-30-2021 at 01:46 AM by phoinix
in eBooks (3)
If you purchase something through a post on our site, Slickdeals may get a small share of the sale.
Deal
Score +33
8,873 Views
$1.99
See Deal
About the OP
Send Message
Expert Pro
Joined Dec 2010 L5: Journeyman
5,879 Reputation Points
549 Deals Posted
810 Votes Submitted
787 Comments Posted
Don't have Amazon Prime? Students can get a free 6-Month Amazon Prime trial with free 2-day shipping, unlimited video streaming & more. If you're not a student, there's also a free 1-Month Amazon Prime trial available.

12
Reply
This comment has been rated as unhelpful by Slickdeals users
Joined Oct 2014
L3: Novice
169 Posts
81 Reputation
11-30-2021 at 01:26 PM #7
It's fascinating as an exercise in believing contradictions. But, I guess I was determined to have said that, damned fatalism!!

1
Reply
This comment has been rated as unhelpful by Slickdeals users
Joined Oct 2014
L3: Novice
169 Posts
81 Reputation
11-30-2021 at 01:34 PM #8
Trading one fatalistic system for another.. Pantheism, monism, Calvinism, Augustinian anthropology/soteriology, all end up deterministic in the end, just like atheism. But atheism was mostly constructed after Christian theology was Platonized thoroughly, atheists called the bull, rightly so (though it's debatable with several figures like Occam) but instead of thinking originally, mainly they are reactionary against theism. They need a big brother to be pissed off with. Every system of thought that identifies either God or God's will with everything that is actual, or conflates nature with will, nature with person, etc. - ends up a determinist, and either the universe or God, or something prior to either, is a fatalism machine.

Are Gym Memberships Worth Paying For?
Copy Code & Open Site More Deals from
Did this coupon
work for you?
Copy
Link Copied to Clipboard