Thanks to community member odbal for finding this deal

Note, must be sold/shipped by Amazon 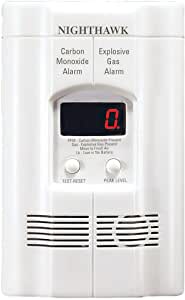 odbal posted this deal. Say thanks!

This was posted by LO6932 on November 22, but interest in the product has been much stronger in the comments section of the frontpage Kidde Plug-In Carbon Monoxide Detector w/ Battery Backup deal. There, user giantbruin pointed out that they were able to get an additional 30% off with the current Amazon/Amex Membership Rewards deal. Alternatively, user hko got 40% off with the current Amazon/Discover Cashback deal.

The FP Kidde Carbon Monoxide Detector deal comments holds a lot of useful and educational information about the difference between CO and explosive gas detectors, the need for each, and when/where to use them. I am a firefighter and have been fielding a lot of those questions, so I'll post my initial explanation below in hopes that it can be helpful here as well. The more we all know, the safer we can be:
https://www.amazon.com//dp/B0002EVNJ6

Add Comment
Reply
in Home Security & Safety (7)
If you purchase something through a post on our site, Slickdeals may get a small share of the sale.

This comment has been rated as unhelpful by Slickdeals users
Joined Apr 2010
New User
1 Posts
10 Reputation
11-30-2021 at 05:19 PM #3
No can do with the explosive gas detector. After my dinner of Bush's baked beans I'll be setting that thing off all night long!

0
Reply
This comment has been rated as unhelpful by Slickdeals users
Joined Nov 2007
L6: Expert
1,085 Posts
206 Reputation
11-30-2021 at 07:02 PM #6
These are very sensitive and detect minuscule leaks. The local HVAC wouldn't come out until the FD checked everything. One pipe needed tightened was all.

It's a good peace of mind.

0
Reply
This comment has been rated as unhelpful by Slickdeals users
Joined May 2009
L9: Master
5,281 Posts
958 Reputation
11-30-2021 at 07:32 PM #7
Be aware that CO is lighter than air and propane is heavier than air. It can detect multiple kind of gas, but probably not at the same time because of its placement

0
Reply
This comment has been rated as unhelpful by Slickdeals users
Joined Sep 2005
L6: Expert
1,498 Posts
11-30-2021 at 07:42 PM #8
I had an explosive gas detector upstairs many years ago. Turned out my then wife was an alcoholic. I decided to pour out all the alcohol we had in the kitchen sink downstairs. There was so much alcohol in the house that I poured out, that the explosive gas detector upstairs went off about halfway through emptying all the bottles. And the sink was draining the entire time. Crazy.

0
Reply
This comment has been rated as unhelpful by Slickdeals users
Joined Sep 2006
L6: Expert
1,329 Posts
283 Reputation
11-30-2021 at 07:49 PM #9
But if you have gas heat or a gas stove or oven, natural gas is mostly methane, which is also lighter than air (and lighter than carbon monoxide also). I think that nearly all apartments, and many private homes, are more likely to have natural gas on premises than would have propane.

This comment has been rated as unhelpful by Slickdeals users
Joined May 2010
L5: Journeyman
547 Posts
153 Reputation
11-30-2021 at 08:45 PM #10
Didn't know there was a difference between CO and gas as far as detectors go I thought CO detector would sense gas. We are switching from electric to gas range so I just bought 2 of these. One for the furnace and one for the kitchen. Thanks.

11-30-2021 at 11:32 PM #13
CO is very, very slightly lighter than air...a difference of less than half the molecular weight of hydrogen, the lightest known gas. In the face of all other environmental variables (air flow, temperature variances, humidity, etc), that difference becomes arguably one of the least contributing factors to where CO travels. It would be more accurate to say that CO usually diffuses with air. As for whether one location is perfect for this to detect both gases with equal effectiveness, I agree that there may not be one. Personally, I use it for its explosive gas abilities...CO detection is secondary to my primary units throughout the house. That said, if this is plugged into a kitchen outlet above a countertop, it would be well-positioned to catch either explosive gas leaks or CO from the stove. Same with a mid-wall outlet near a hot water heater in a garage.

Definitely shouldn't be one's only line of defense for CO detection, but should absolutely be incorporated on top of other CO detectors for its explosive gas detection.