Slickdeals Forums Deal Talk Vudu has Sherlock Series 1-4 & The Abominable Bride (Digital Bundle) - $29.99
Advanced Search
Sorry, this deal has expired. Get notified of deals like this in the future. Add Deal Alert for this Item
Frontpage Deal

Thanks to community member jbloggs for finding this deal. 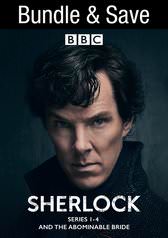 jbloggs posted this deal. Say thanks!

Written by Edited January 21, 2022 at 10:24 AM by
Vudu Deal for Sherlock fans (Benadryl Slumbercatch version)

There are 3 episodes in each of the 4 seasons, but each episode is like a 90 min movie

The first couple seasons are immensely satisfying.
You read that wrong. Only available to buy.
Easily the best Sherlock out there!

0
Reply
This comment has been rated as unhelpful by Slickdeals users
Joined Sep 2019
New User
4 Posts
10 Reputation
Our community has rated this post as helpful. If you agree, why not thank ?
01-20-2022 at 12:44 PM #6
Checking justwatch.com it looks like apple TV is the only place to stream it (without purchasing episodes)

This comment has been rated as unhelpful by Slickdeals users
Joined Oct 2015
L3: Novice
167 Posts
46 Reputation
01-20-2022 at 01:38 PM #10
Loved the first couple but the last season was so bad I have a hard time recommending it. Most people I know hated the final season but there are a few I know that like it. So it's something anyone going in blind should keep in mind.

1
Reply
This comment has been rated as unhelpful by Slickdeals users
Joined Apr 2018
New User
9 Posts
10 Reputation
01-20-2022 at 02:15 PM #12
Imho the show gets so bad at the later season, it makes you question if the other seasons were good like you remember

I thought I'd seen these on Vudu TV sales earlier, but I can't find any threads indicating their price. $10 per season is still better than anything I've found historically.

I know this was on Netflix in 2013 and perhaps Amazon Prime back then too, but not now. I can't even find it on BBC America or PBS, who originally aired it in the US.