Slickdeals Forums Deal Talk 65" Hisense TV $400: Costco Members
Advanced Search
Sorry, this deal has expired. Get notified of deals like this in the future. Add Deal Alert for this Item
Popular Deal 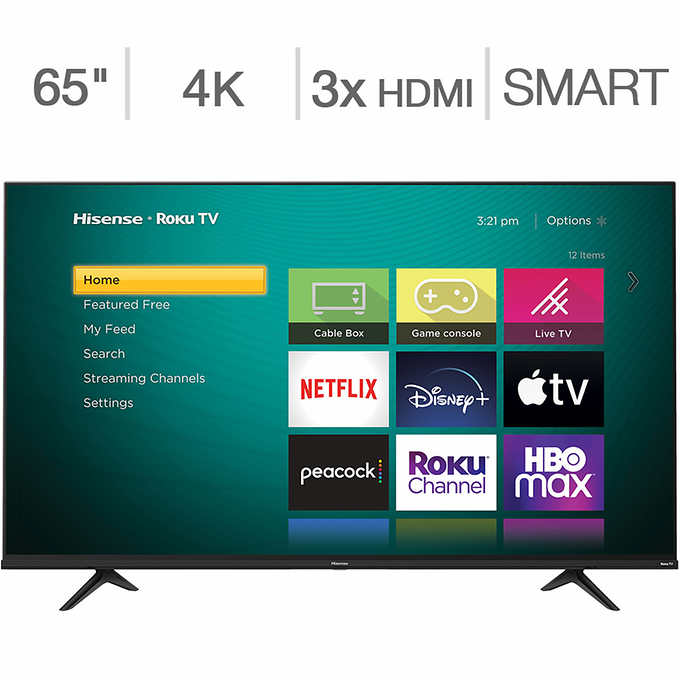 DJP_24 posted this deal. Say thanks!
Add Comment
Reply
in 4K TVs (9) Get Costco Wholesale Coupons
If you purchase something through a post on our site, Slickdeals may get a small share of the sale.

1
Reply
This comment has been rated as unhelpful by Slickdeals users
Joined Jul 2009
L5: Journeyman
573 Posts
251 Reputation
Our community has rated this post as helpful. If you agree, why not thank ?
05-09-2022 at 07:43 PM #5
I like TCL and Hisense both of which can be considered "budget," but they have different levels. They have many well reviewed TV's. If you read through the forums they plenty of people speaking highly of them. They have multiple variants like Roku versions, Android TV versions, Hisense has a "X-Class" version which is apparently some Comcast thing?

Hisense made some of the Onn tv's. (The in house Walmart TV's.) I don't know if they are making the current gen though, but the Onn TV's seem to be decent.

0
Reply
This comment has been rated as unhelpful by Slickdeals users
Joined Apr 2007
L5: Journeyman
744 Posts
44 Reputation
05-09-2022 at 09:19 PM #8
I am trying to find reviews for this model. Is the R7G5 series equivalent to the U7G series? I know that Costco sometimes has their own model numbers that are equivalent to others from the manufacturer.

2
Reply
This comment has been rated as unhelpful by Slickdeals users
Joined Nov 2015
Mr Gambit
539 Posts
62 Reputation
05-09-2022 at 09:46 PM #10
I just got that tv Saturday. For the price I love it. Does everything I need it to. Also xbox series x looks amazing on it. Too bad this one is sold out. I was looking to get another hisense for a bedroom.

0
Reply
This comment has been rated as unhelpful by Slickdeals users
Joined Jul 2014
New User
991 Posts
268 Reputation
05-09-2022 at 10:28 PM #13
I think you're right. The dimensions are exactly the same as the A6G. Probably the same panel but with Roku rather than Android TV. The U6G or H8G dimensions and feature sets are different. I'm surprised though because the manufacturer's warranty on this one is 3 years compared to 1 year on the other more premium models. Makes this a very tempting buy.

1
Reply
This comment has been rated as unhelpful by Slickdeals users
Joined Feb 2012
L10: Grand Master
7,202 Posts
1,102 Reputation
05-10-2022 at 03:39 AM #15
I've had great luck with Hisense and would grab this in a heartbeat if I didn't already snag a budget LG from the Target clearance. My 50" Hisense lasted 8 years of constant use before the back light died. A quick cheap $25.00 repair and it's kickin again in the garage