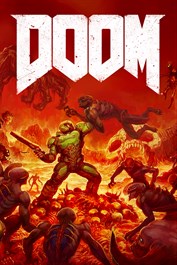 Note, Now includes all three premium DLC packs (Unto the Evil, Hell Followed, and Bloodfall), maps, modes, and weapons, as well as all feature updates including Arcade Mode, Photo Mode, and the latest Update 6.66, which brings further multiplayer improvements as well as revamps multiplayer progression


Add Comment
Reply
in Xbox One (7) Get Xbox.com Coupons
If you purchase something through a post on our site, Slickdeals may get a small share of the sale.

Slayers collection has all of these for $7.49 too. And they're all on game pass

0
Reply
This comment has been rated as unhelpful by Slickdeals users
Joined Nov 2014
L5: Journeyman
785 Posts
142 Reputation
08-16-2022 at 08:56 AM #7
Doom 3 and earlier were published by various publishers. Doom and Doom Eternal were both published by Bethesda, which means these games are now first-party Microsoft games. I don't think that any first-party Microsoft games have left Game Pass.

0
Reply
This comment has been rated as unhelpful by Slickdeals users
Joined Sep 2008
L3: Novice
124 Posts
38 Reputation
08-16-2022 at 09:52 AM #8
Forza games all get removed from game pass eventually when they get delisted. Alan Wake on the 360 is another Microsoft game that got removed.

Also, is it the original version with original graphics?

0
Reply
This comment has been rated as unhelpful by Slickdeals users
Joined Feb 2019
L3: Novice
127 Posts
38 Reputation
08-16-2022 at 11:25 AM #11
So purchasing the Slayers collection will not give you access to the PC versions of the games in that collection that are available on PC? Do I have this right?

0
Reply
This comment has been rated as unhelpful by Slickdeals users
Joined Aug 2009
L4: Apprentice
369 Posts
138 Reputation
08-16-2022 at 12:57 PM #12
I think those are the exceptions. IIRC Forza games are delisted because of the music rights or other licensing agreements. You can't buy those Forza games anymore either, so it's not like they're only leaving game pass.