Thanks to Community Member VJ9 for sharing this deal 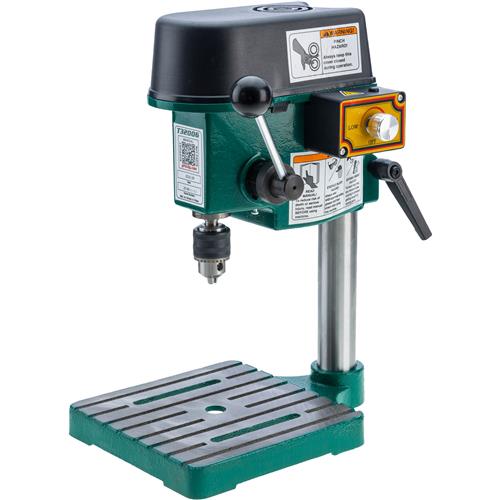 VJ9 posted this deal. Say thanks!

Written by Edited August 19, 2022 at 07:55 PM by
T32006 Variable-Speed Mini Benchtop Drill Press
Better than a hand-held drill for making accurate 90° holes.
Whether you are making doll furniture, model train sets, jewelry or custom ammunition, these space-saving machines are just what you need for your delicate work.
The 1/8 HP motor powers the variable speed from 0–5000 RPM.
The cast iron table is 6-3/4" square, 1/8" thick and offers 360° of swing.
The Variable-Speed Mini Benchtop Drill Press may be small but is definitely not a toy.
Perfect for tight spaces.
Like all of the Grizzly drill presses, the T32006 comes with a 1-year warranty covering parts and assuring the unit is free from factory defects. (Consumables are not covered by the warranty.)
The T32006 manual was written by our U.S. based Documentation Department is packed with useful information. The complete and easy-to-read manual makes it easier to assemble and maintain your drill press.
The Grizzly Technical Support team is U.S. based. Parts and accessories for the drill press are available online and shipped from the Grizzly parts warehouse in Springfield, MO.
Made in an ISO 9001 factory
SPECIFICATIONS:
https://www.grizzly.com/products/...ess/t32006

Add Comment
Reply
in Drills & Power Tools (7)
If you purchase something through a post on our site, Slickdeals may get a small share of the sale.

$20 shipping.
So your baby can have a drill to copy his big daddy, duh.

Get it. Get it for your baby.
I'm trying to think of a reason that I need to buy a "baby" drill press.
Unfortunately, I really don't need it.

This comment has been rated as unhelpful by Slickdeals users
Joined May 2020
L1: Learner
1,673 Posts
950 Reputation
Pro

Why Bosch doesn't have their PBD-40 mini drill press, available in the US, I'll never understand.

Get it. Get it for your baby.

7
Reply
This comment has been rated as unhelpful by Slickdeals users
Joined May 2020
L1: Learner
1,673 Posts
950 Reputation
Pro

I for one would love a smaller version of the Nova (Teknatool) Voyager, or Viking (but made by a different company lol.). But the bells and whistle on them are more than I'd ever need. So a scaled down version with less... stuff... would be great. Just a simple direct drive drill press without belt changes, and a speed control. Maybe splurge a bit for a reverse feature, so if I ever git frisky, i could tap left handed threads lol (like if i wanted to mess with someone's head 100 years from now when they see what I was working on, and screamed at me for causing them to shear a few bolts. Lol.)

Tbh, I've made drill press type tools a few times, but getting variable speeds from an electric handrill isn't easy.

I have full size drill presses (a 10 and a 16) but both are a belt adjusted speeds, and having 1 arm, changing a belt speed

0
Reply
This comment has been rated as unhelpful by Slickdeals users
Joined May 2020
L1: Learner
1,673 Posts
950 Reputation
Pro

Plus, the people at Teknatool are... not very... well they're just 💩 . I'm about a mile away from Teknatool (the company appointed by Nova to do their drill presses).

They never answer emails or phone calls, and many of the drill presses they ship out have issues. My turning friends love their lathe chucks, but they know if there's ever an issue, then they will have to go on an adventure to get it resolved.

I kept wanting to go in to talk to someone, but they're never there. It's like a laundering front ??? lol.


Hopefully, someone makes a simpler version of a DVR press. My drill presses stay at one speed setting because I just can't change the belts.