Slickdeals Forums Deal Talk Pokemon Cards (2.63 per pack) $2.63 at Woot
Advanced Search
Sorry, this deal has expired. Get notified of deals like this in the future. Add Deal Alert for this Item
Popular Deal

This deal may be eligible for up to 6% cashback at Woot! with Cashback Rewards, a program exclusively for Slickdeals members that enables you to maximize your savings by earning Cashback Rewards Points on select deals found on Slickdeals. Points are redeemable for PayPal credit, gift cards and more. Sign up and start getting paid to shop. 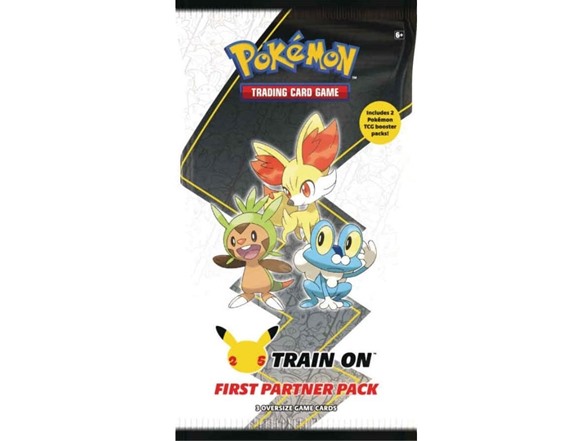 NervousLumber8614 posted this deal. Say thanks!
Add Comment
Reply
in Games, Board Games & Card Games (10) Get Woot! Coupons
If you purchase something through a post on our site, Slickdeals may get a small share of the sale.

11-25-2022 at 11:47 PM #5
There are two sealed booster packs in each one? Definitely some random cards alongside some non-random jumbo first partner cards.

0
Reply
This comment has been rated as unhelpful by Slickdeals users
Joined Oct 2014
L4: Apprentice
353 Posts
157 Reputation
11-25-2022 at 11:48 PM #6
Think people are going based off the booster packs it comes with and not the oversized cards themselves.

1
Reply
This comment has been rated as unhelpful by Slickdeals users
Joined Dec 2014
New User
5 Posts
10 Reputation
11-26-2022 at 11:13 AM #12
these come with the three oversize cards and 2 booster packs. normally some older packs like vivid voltage and battle styles. I wonder if these are newer reprints and therefore maybe have newer packs like brilliant stars and lost origin? probably not though.

0
Reply
This comment has been rated as unhelpful by Slickdeals users
Joined Nov 2022
New User
5 Posts
14 Reputation
11-26-2022 at 03:26 PM #14
These retail for $10 a pack I can't imagine Amazon would sell knock-offs, but it says the country of origin is China. If that is true, these are fake, as Pokemon has only printed cards in Japan, US, UK, and Australia. It is probably a misprint. Assuming that the country of origin is a misprint, this is not a bad deal. Sun and Moon base packs have been selling for between 4 and 5 dollars each lately, and have been increasing, with a box of 36 packs selling in the 225 to 250 range. The most expensive card in the set is probably a secret rare umbreon, which sells for less than $30. There are only 5 or 6 cards in the set that I can think of that sell for more than $10. Battle Styles booster boxes (36 packs) go for less than $100. The most expensive card in the set is the Ultra Rare Tyranitar alternate art, which is indeed quite rare, and it sells for between $90 and $100. There are a few other ultra rares that sell for $60 and $25, and then about 8 or so other cards that sell for more than $10. If you choose not to open the First Partner pack, the Kalos region packs sell for around $15 to $20 each.