GimmeYoTots Expert
+17 Deal Score
9,657 Views
The Camel shows these are near an all time low. The lowest ever was back in July and around ($1.42) less -- for a very short period of time. I own a number of Knipex Cobras and I bought this model Gedore pliers (in a difft size) as a gift for my father. So, I had a chance to examine them, and they were Made in Austria, and had a push button slide actuator that worked just like the Knipex pliers. In fact, if you look at some of Gedore's other pliers offerings, you'll notice that Gedore seems to copy Knipex designs... quite often. I believe they even make a Knipex Pliers Wrench copy [amazon.com] as well.

Gedore is a well-known premium German tool company (est. Remscheid Germany, 1919), but many of their best tools are actually made in Austria, as well as Germany. NOTE -- Even though these pliers have red handles (and not "Gedore blue" handles), do not confuse these with the Gedore RED line, which is mostly all made in Taiwan. These should be made in Austria.

Here's a link to KC Tool [kctool.com], who is a great resource for verifying COO. KC Tool shows this Gedore model as being Made in Austria. Also, for comparison, the Knipex Cobras in 12" are selling for over $53 on Amazon [amazon.com] right now, and their lowest price since 2016 was more than $45. 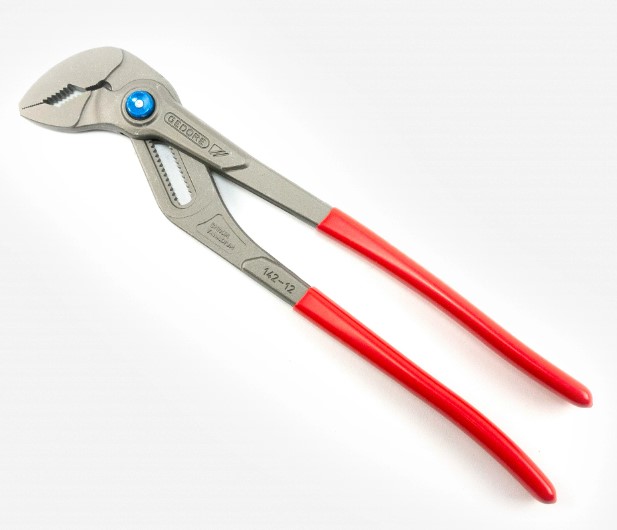 GimmeYoTots posted this deal. Say thanks!
Add Comment
Reply
Created 12-06-2022 at 10:34 AM by GimmeYoTots
in Hand Tools (5)
If you purchase something through a post on our site, Slickdeals may get a small share of the sale.
Deal
Score +17
9,657 Views
$28.90
$30.77
See Deal
About the OP
Send Message
Expert Pro
Joined Feb 2019 L8: Grand Teacher
5,578 Reputation Points
632 Deals Posted
3,570 Votes Submitted
3,282 Comments Posted
Don't have Amazon Prime? Students can get a free 6-Month Amazon Prime trial with free 2-day shipping, unlimited video streaming & more. If you're not a student, there's also a free 1-Month Amazon Prime trial available.

2
Reply
This comment has been rated as unhelpful by Slickdeals users
Joined Feb 2019
L8: Grand Teacher
3,282 Posts
5,578 Reputation
Original Poster
Pro
Expert
12-06-2022 at 01:23 PM #3
Well, a few things - first, Amazon is lower than everyone else. So, yes, the Amazon price now, even though near an all time low, is only a few bucks off from where these have been selling. That said, secondly, part of the point of my post is that these are about half the price of the comparable Knipex. So, at less than $29, you're getting an Austrian made Gedore (a great German tool brand in it's own right) that is a worthy sub to the significantly more expensive 12" Knipex Cobras.

If you want to wait for a better price, then by all means, but again, part of the purpose of this post is to point out that these Gedore's are selling for about half the price of comparable 12" Knipex Cobras, and Amazon has the best price on them.

11
Reply
This comment has been rated as unhelpful by Slickdeals users
Joined Sep 2018
L3: Novice
100 Posts
30 Reputation
12-06-2022 at 04:14 PM #4
A knock-off selling for half the price of the brand it imitates does not automatically make it a deal..thats basically how knock-offs work.

This is 5% off their average amazon price, so a minimal discount.

8
Reply
This comment has been rated as unhelpful by Slickdeals users
Joined Feb 2019
L8: Grand Teacher
3,282 Posts
5,578 Reputation
Original Poster
Pro
Expert
12-06-2022 at 04:38 PM #5
I mentioned in the OP that Amazon's price is lower than anyone elses. So, even if Amazon sells it at this price for the next year, it doesn't change the fact that Amazon's current price is very good, and better than everyone else's. Also, this price *is* close to the all time low on Amazon.

As far as Gedore just being a knock-off of Knipex, well, Knipex did originate the design, but Gedore is a high-end German tool maker with a long history (Gedore was founded in Germany in 1919). These are half the price and from a similar high-end German brand. Sometimes copy-cat designs are as good as the originals. In this case, if the prices were the same, sure, I'd buy the Knipex, but in this particular case the price is not the same, and it's not even very close.

Me on the other hand, if quality is there, price is reasonable, IDGAF. We all copy each other at one point anyways.

I never heard is this brand I own a few 12" from HF. Maybe I'll try this out.

The 12" pair was $32 a couple days ago (in the comments). I bought a pair. I also have Keepa and it doesn't show that it happened. They've been less than $45 several times over the last few years.

This comment has been rated as unhelpful by Slickdeals users
Joined Sep 2006
L5: Journeyman
633 Posts
165 Reputation
12-07-2022 at 07:43 AM #9
Gedore is not a knock-off, or a copy-cat -- you really need to educate yourself. This brand is respected more in Europe than Knipex. Knipex makes very good cutters; their pliers are so-so at an outrageous price. This is a very good deal.

3
Reply
This comment has been rated as unhelpful by Slickdeals users
Joined Feb 2019
L8: Grand Teacher
3,282 Posts
5,578 Reputation
Original Poster
Pro
Expert
12-07-2022 at 07:50 AM #10
It's funny, I never saw that - but note, that was a third party seller, and the third party seller of those ridiculously-cheaper-than-everyone-else that is selling 12" Knipex Cobras for only $30 is:
Bluepolars Incredible Food via Amazon

There are a bunch of comments in that thread questioning whether that third party listing was selling fakes. The CCC chart I was referring to is for Amazon as the seller, only. I wasn't looking at third party seller pricing, but I just checked Grooves in Germany, and even they are over $38 for 12" Knipex Cobras. There is no way Bluepoloars Incredible Food is getting legitimate Knipex Cobras and selling them THAT much cheaper than Grooves or Amazon.

One of the comments stated that the guy already received them and they "were a little loose" and he thought "they might be factory seconds." Knipex does not sell factory seconds as far as I'm aware. Something's wrong there...

One more Edit note - that $38.59 current price on Amazon is from third party seller "Da Lorenzo Shop." They're located in Panama. There are a bunch of complaints about product and delivery issues that Amazon crossed out and dismissed because Amazon was doing the fulfillment. A third party in Panama, Central America, has the best price on these??? Order at your own risk... and go ahead and DV my comment if you don't like the truth.

I bought the Knipex at that price and it was shipped and sold by Amazon, not 3rd party.

1
Reply
This comment has been rated as unhelpful by Slickdeals users
Joined Mar 2022
L3: Novice
186 Posts
42 Reputation
12-07-2022 at 09:18 AM #12
Hate people who crap on someone who posts a deal when they themselves never post any deals. people who post deals make this site works... if it ain't a deal for you, keep your thoughts to yourself.

The knipex are overall better especially wear resistance but the gedores are runner ups and does slightly edge out the knipex on certain tasks. Both are still better than many brands.

Since the knipex 12 inches are fairly hard to find at a good price usually. Good deal.