$20.00
-29 Deal Score
165,520 Views
This is a FYI for people who are interested in a CHEAP ($20 per month)Unlimited Plan through AT&T. The UConnect plan via the ZTE Mobley is back for a limited time. Currently, AT&T is sold out of the device (and its not certain if they will getting them back in stock). but you can still get the plan if you can come up with the ZTE Mobley device. You can still find a handful of the devices on eBay currently. The cool thing about the device is that people have figured out how to create adapters so the device can run off a wall outlet.

Per the wonderful website, RVmobileinternet.com you need to call a special ATT number to get the deal as it a special promotion. Below are the two numbers they listed on the website:

HERE ARE LINKS TO THE RVMOBILEINTERNET SITE WHERE THEY DISCUSS WHAT THE MOBLEY IS AND HOW TO GET THIS DEAL:

You can read about the device on several active forums too. Howard Forums is probably one of the best! 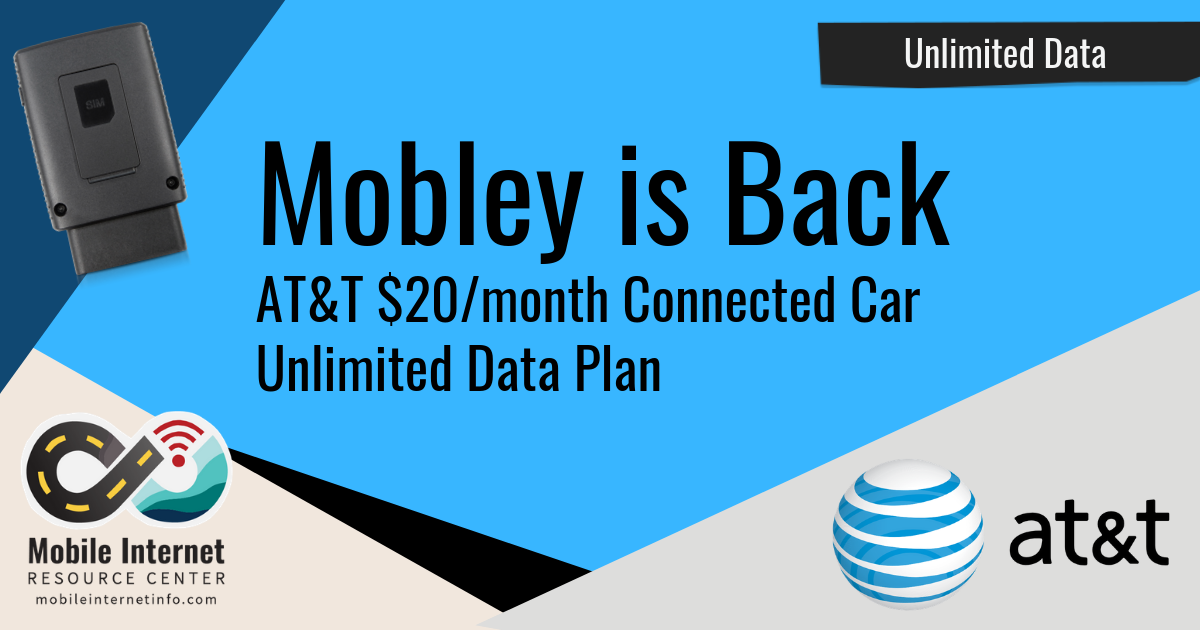 billbraskey posted this deal. Say thanks!
Add Comment
Reply
Created 03-08-2019 at 11:44 AM by billbraskey
in Cell Phone Plans & Services (7) Get AT&T Wireless Coupons
If you purchase something through a post on our site, Slickdeals may get a small share of the sale.
Deal
Score -29
165,520 Views
$20.00
See Deal

Success! The following process works very smoothly as of April 2:

If you already have the ZTE Mobley, have it ready and be prepared to provide the IMEI number to the phone representative. (If you don't have one yet, they can still be found NEW online on eBay, etc.)

When you call tell the representative that you want the UConnect plan for $20 per month (it's a Chrysler/Mopar promotional plan) and that you already have a Mobley.

Some users have reported that the AT&T phone representatives had a hard time finding the Uconnect plan in their computer system. If this happens to you, make sure the phone rep is searching for the "UConnect" plan. You can also mention that it is a Chrysler/Mopar promotion. If they still have trouble, hang up and call the same phone number again to get a different representative.

Once the phone tepesenative has found the UConnect plan in their syystem, they ask you for the IMEI of your new Mobley and get you set up with an ATT account and then they will send out the SIM card.

Once you receive the SIM card, you will have to call back to ATT to activate it (one user reported calling 866-895-1099 and said the system was all automated.). They will ask for the phone number associated with your Mobley (even though it it is a hotspot, AT&T still gives it a phone number... Not sure why?) and they ask for your SSN or your pin code.

Congratulations! You now have FAST Unlimited data from AT&T for $20 per month!
Link to this Wiki
Want more deals like this? Create a deal alert for Cell Phone Plans & Services.
Add Deal Alert

03-08-2019 at 12:23 PM #6
The link you sent is for the Harman Spark another device that ATT sells. It is my understanding that the GPS chip in the Harman Spark shuts the unit down after a period of not moving whereas the ZTE Mobley does not have this. I believe the terms and conditions for the Spark state that the device must be used in the car whereas the terms arent as restrictive for the ZTE Mobley. If you look at Howard Forums, you'll see that many users upgraded to better and more powerful hotspots with ATT on their Mobley accounts.
0
0
0
0
Reply
This comment has been rated as unhelpful by Slickdeals users
Joined Mar 2015
L7: Teacher
2,396 Posts
335 Reputation
03-08-2019 at 12:26 PM #7
Mobley isn't a good radio though right it's behind the times hardware-wise. How are they upgrading to newer hotspots with the Mobley SIM? Last I heard AT&T puts a PIN on the SIM and you can't get it to use with another device?
0
0
0
0
Reply
This comment has been rated as unhelpful by Slickdeals users
Joined Nov 2006
L3: Novice
211 Posts
68 Reputation
Original Poster

There are lots of people who have posted on those forums that they were able to upgrade to newer hotspots with Mobley SIMs. In fact, several said they were prompted by ATT to upgrade their devices after they had the account for a period of time. As far as the SIM getting locked and not geing able to switch devices, several people posted they called ATT and got the unlock codes. Check out Howard Forums for more details.
0
0
0
0
Reply
Last edited by billbraskey March 8, 2019 at 02:03 PM.
This comment has been rated as unhelpful by Slickdeals users
Joined Nov 2006
L3: Novice
211 Posts
68 Reputation
Original Poster

As far as speeds, I get slightly better speeds but much better reliability from the Netgear. Today about 25Mbps (but this all varies by tower and signal more than the device)
0
0
0
0
Reply
This comment has been rated as unhelpful by Slickdeals users
Joined Nov 2014
Beep Boop.....Argh!
1,622 Posts
1,302 Reputation
Pro