• Adjustable, heavy-duty shelves and utility design accommodate all of your storage needs

• Can also be set up as a workbench 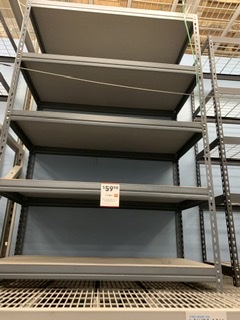 SHRIVES posted this deal. Say thanks!
Add Comment
Reply
in Storage & Cleaning (3) Get Lowe's Coupons
If you purchase something through a post on our site, Slickdeals may get a small share of the sale.

Costco has the black ones for $45 ($65 - $20 off sale). 2x Thicker uprights but smaller shelves (actual measurement of the shelves are most likely 1" less than what it says on the box, at least the black one I bought are and I'm 90% sure all of them come from the same factory because another store I measured the shelf and they too were 1" smaller shelves.)

They are no where near "industrial" strength lol. Mine buckled into itself. Granted it was user error I admit. Bottom shelf NEEDS to be attached like you see in the picture. I thought it was an awesome idea to not put that bottom shelf on so I can easily slide stuff underneath it.

But nope, the top shelf had about 120lb and the board snapped in half and went between the wall and shelf, pushing it forward but the legs stayed put since it was on carpet. Then it just bent and toppled onto itself.

The weak point isn't where the vertical sides stack ontop each other (in my scenario at least). It was the bottom lol

The thickness is about the same as a dime. Imagine stacking two dimes ontop of each other on it's edge, that's how the vertical post stack on each other

. It's kinda scary when you first think about it but that's the least of your worries. Your'e gonna want to go to HD and have them cut you some wood, just tell them the dimensions and it takes like 2 minutes.

All-in-all, I'd buy again, just attach the bottom shelf and it'll be a little sturdier and you won't be in my situation

Pictures so you can laugh at my fail.
https://imgur.com/a/K5OErHl#ctoTKqe

Pictures so you can see the thickness of the metal and me testing 135lb in the center of the shelf. Thinking I was good to go, Lol I thought having 120lb distributed evenly on the shelf was a good idea. Boy was I wrong.
https://imgur.com/a/BZVBdGX

Conclusion: Buy more shelves to stack ontop of the existing shelves it comes with lol
Reply Helpful Comment? 4 0
This comment has been rated as unhelpful by Slickdeals users
Joined May 2013
L2: Beginner
39 Posts
10 Reputation
01-05-2020 at 05:54 PM #8
I thought about getting a couple of these on black friday for $50, but they are just not heavy enough for what I needed. If you want an 18" deep shelving for about the same price, lowes has these wire shelves.

The gray one you just use the shelf to connect the top and bottom.
Reply Helpful Comment? 0 0
This comment has been rated as unhelpful by Slickdeals users
Joined Aug 2005
L3: Novice
211 Posts
156 Reputation
01-05-2020 at 09:39 PM #11
I got one of these open box from Lowe's a few months ago. Mainly use it as a surfboard rack, 24" depth is just wide enough for most boards to slide right into. Spaced it so there is a big space between the topmost and second highest shelf and it's become my main work table in my (small) garage.