+62 Deal Score
4,265 Views
The Kindle edition of Seven Unholy Days is free through Friday. If you haven't read this one, there's no better time than now. It has already been downloaded 40,000 times this week. 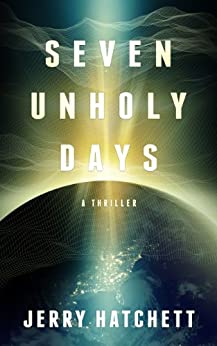 instinet posted this deal. Say thanks!
Add Comment
Reply
in eBooks (3)
If you purchase something through a post on our site, Slickdeals may get a small share of the sale.
Deal
Score +62
4,265 Views
See Deal
Kickstart Summer with Memorial Day Savings
Deals on grills and everything else from fire pits to fashion finds in one place.
About the OP
Send Message
Ft. Worth Joined Aug 2005 Mover & Shaker
475 Reputation Points
65 Deals Posted
416 Votes Submitted
845 Comments Posted
Don't have Amazon Prime? Students can get a free 6-Month Amazon Prime trial with free 2-day shipping, unlimited video streaming & more. If you're not a student, there's also a free 1-Month Amazon Prime trial available.

Can one man launch the end times of Revelation? Can another man stop him?

Celebrated entrepreneur Matt Decker goes from hero to goat when the futuristic power grid he designed is brought down by a hack that was supposed to be impossible, plunging the United States into darkness. As the nation descends into lethal pandemonium, Decker works feverishly to restore power and undo the damage. But the hack was just Day One, and the world is in for a very bad week.

Whoever is behind the attacks wants more than global death and destruction. It's also personal, and Decker is the target. As the attacks escalate and the death toll rises, they taunt him with riddles and threats, daring him to put the clues together in time to stop them from ushering in Armageddon.

Decker and his thrown-together team are up against the wall and racing the clock in this thriller that grabs you early and never lets go. Read it now and find out why Jerry Hatchett is the author you can't put down.

This doesn't seem like a very well known book. Am I missing something here or is this some kind of strange Slickdeals ad?

How to Change Your Mind: What the New Science of Psychedelics Teaches Us About Consciousness, Dying, Addiction, Depression, and Transcendence (Kindle eBook) $1.99
36  •  15

The Office: The Untold Story of the Greatest Sitcom of the 2000s: An Oral History by Andy Greene (Kindle Edition) $4.99

How to Find Affordable (and Free) Ebooks and Audiobooks During Quarantine

Here's How You Can Scare Up a Free 30-Day Shudder Subscription
Copy Code & Open Site More Deals from
Did this coupon
work for you?
Copy
Link Copied to Clipboard