$398.95
+1 Deal Score
874 Views
The Thule Glide 2 is on sale at Amazon now for just under $400 - 4 items left at posting. I've been watching for months for a discount and the lowest I've seen it on Amazon before is $480. I've also been watching ebay for months. Only 1 returned/near-new ever showed up and was priced at $400. Typical ebay and other store prices for new is actually 500-575, with the previous $480 on amazon being the cheapest I saw before for new.

Beware that this is not the Thule Urban Glide 2. The Urban glide has a pivoting front wheel, where as the Glide 2 has a fixed wheel (desirable for faster running). This will not be suitable for all for going to shops etc due to the fixed front wheel and wide wheel base. This Thule Glide 2 has larger wheels too (actually the largest of any strolled I could find with 16" front and 18" rear, with the Bob Blaze being second (with 16" all round)).

The Bob Blaze and this Thule Glide 2 are the most serious jogging strollers out there. Trust me a I did a lot of research; and it's good enough for Calumn Neff he set his string of stroller-run world records with this stroller. The only downside for me is that the seat angle is not very upright compared to the Bob Blaze. The Bob Blaze 'might' be slightly better off road as the suspension 'looks' like it has a bit more travel and setting. But because the majority of my jogging is on hard trails or pavement/road, I'm going with the Thule Glide which is the faster/lighter stoller. The 18" rear wheels should make jumping curbs to avoid pedestrians with covid easy 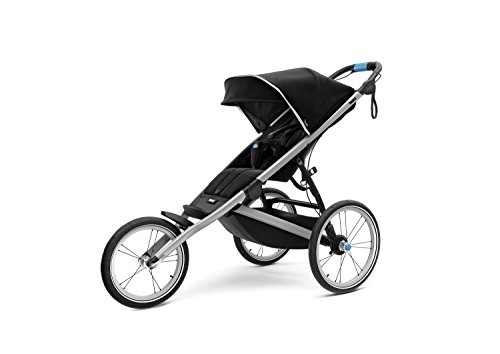 DavidP5334 posted this deal. Say thanks!
Add Comment
Reply
Created 05-21-2020 at 12:05 PM by DavidP5334
in Strollers (4)
If you purchase something through a post on our site, Slickdeals may get a small share of the sale.
Deal
Score +1
874 Views
$398.95
See Deal
Kickstart Summer with Memorial Day Savings
Deals on grills and everything else from fire pits to fashion finds in one place.
Don't have Amazon Prime? Students can get a free 6-Month Amazon Prime trial with free 2-day shipping, unlimited video streaming & more. If you're not a student, there's also a free 1-Month Amazon Prime trial available.
Want more deals like this? Create a deal alert for Strollers.
Add Deal Alert for Strollers

How New Parents Can Save Big with Our Baby Shopping Guide

7 Free Kids Learning Websites -- Some so Creative, They're Great for Adults, Too

These Energy-Busting Kid Toys Could Buy You Some Quiet Time