$259.99
+9 Deal Score
11,319 Views
For a limited time, get Assassin's Creed® Valhalla when you buy select AMD Ryzen™ Processors
AMD Ryzen 3000 Series processors aren't just built to perform, they're designed to win, with high framerates, low temperatures and up to 16 cores. Experience the difference in Assassin's Creed Valhalla where you are Eivor, a fierce Viking warrior raised on tales of battle and glory. Lead epics raids or build your own Viking legend. Get equipped to win the fight and claim more riches for your clan with the elite performance of AMD Ryzen 3000 Series desktop processors.
Now you can enjoy incredible, smooth performance in the most demanding games, from competitive 1080p to ultra-quality 4K resolution. Want to push the limits? AMD Ryzen 3000 processors now boast higher boost clock speeds1, 2. In addition, Industry-leading AMD Ryzen 3000 Series processors are ready for the world's first PCIe 4.0 connectivity3, so you can take advantage of the most advanced motherboards, graphics and storage technologies available.1
Built using the world's most advanced manufacturing technology, Ryzen 3000 Series processors offer faster memory access for relentless high-performance gaming, all while keeping your system astonishingly cool and quiet.
*Footnotes
1. Specifications of 3rd generation Ryzen processors as of July 2, 2019. As of July 7, 2019, the AMD's 3rd Gen Ryzen processors have higher speeds (4.7 GHz vs. 4.3 GHz, More Memory (up to 72MB vs up to 40MB), and wider bandwidth (PCIe Gen 4 with 32GB single directional, vs PCIe Gen3 with 16 GB/s single directional) compared to 2nd Generation Ryzen processors. RZ3-68.
2. 4.7GHz maximum frequency requires AMD Ryzen 9 3900XT. Boost Clock Frequency is the maximum frequency achievable on the GPU running a bursty workload. Boost clock achievability, frequency, and sustainability will vary based on several factors, including but not limited to: thermal conditions and variation in applications and workloads. GD-151.
3. Specifications of 3rd generation Ryzen processors as of January 2, 2018. As of January 7, 2019, the AMD's latest 2nd Generation Ryzen processors and Intel's latest 9th Generation Intel Core processors use the PCIe Gen3 interface 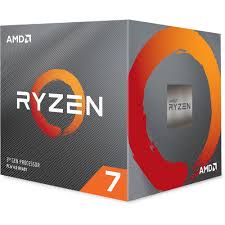 ZestyLyme posted this deal. Say thanks!
Add Comment
Reply
in Computers (5) Get Micro Center Coupons
If you purchase something through a post on our site, Slickdeals may get a small share of the sale.

Our community has rated this post as helpful. If you agree, why not thank ?
07-25-2020 at 07:33 PM #4
Intel still has better single core performance but it's not comparable to how much more they are. You should order one of these right now. It's a killer deal and very future proof. Intel's equivalent is $105 more currently when not on sale. It's just not worth it to build Intel over amd IMO.

BTW this includes the wraith prism cooler not the wraith stealth led cooler.