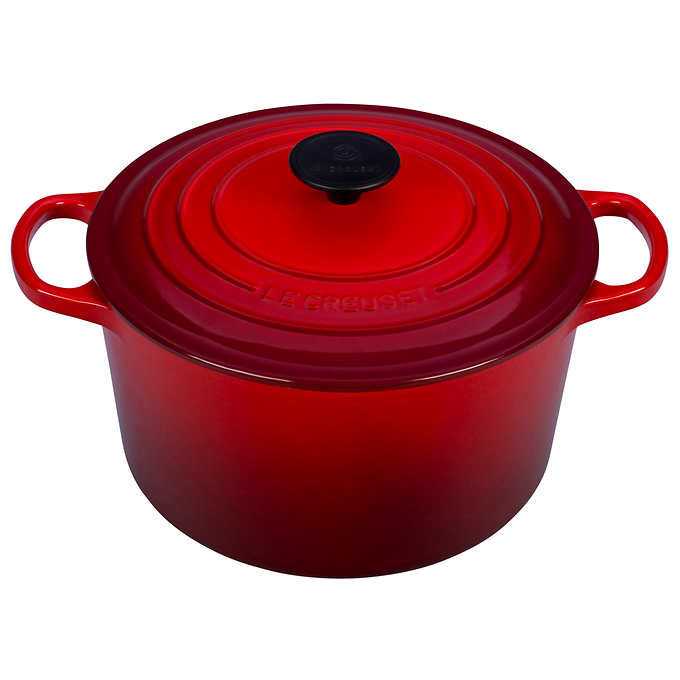 Crash1009 posted this deal. Say thanks!
Add Comment
Reply
in Other Get Costco Wholesale Coupons
If you purchase something through a post on our site, Slickdeals may get a small share of the sale.
Deal
Score +18
10,410 Views
$199.99
See Deal

This comment has been rated as unhelpful by Slickdeals users
Joined Jul 2006
?
415 Posts
112 Reputation
10-16-2020 at 05:07 AM #9
For me it comes down to a few things. Le Creuset is made in France while the Lodge is made in China. I trust french made more when it's going to be in direct contact with my food. The Le Creuset enamel feels smoother and more even than on the couple of Lodge I've seen in person. Le Creuset has a lifetime guarantee which chances are you won't need to use because the quality control is pretty good while there seem to be more reports of chipping with Lodge. Le Creuset is more of a buy it once and never have to replace it purchase.
1
0
0
0
Reply
This comment has been rated as unhelpful by Slickdeals users Show Post
HIDDEN 10-16-2020 at 05:22 AM
This comment has been rated as unhelpful by Slickdeals users
Joined Mar 2005
L3: Novice
117 Posts
102 Reputation
10-16-2020 at 05:22 AM
Nice product and was just about to buy then realized I already have a product that killed this. The instapot. For most everything I would put in a cast iron Dutch oven would now go into the pressure cooker.
0
0
0
5
Reply
This comment has been rated as unhelpful by Slickdeals users
Joined Jun 2014
L6: Expert
1,948 Posts
676 Reputation
10-16-2020 at 06:02 AM #11
Mine's being delivered today, so I came to ask the same question.
I realize it's a personal choice to not "trust" Chinese products, but I think it's important to realize that Chinese production is as good as the company paying for it; from what I've read, Lodge has pretty strict standards (all things considered) and I'd trust their Chinese products over some no-name cast or enameled piece. Any concerns about safety are opinion and there is no evidence or reasonable expectation of the Lodge being anything but safe.

As for quality: I'm looking to replace a Paula Deen branded, 5qt dutch oven I've had for over 10 years. It was a gift and I have no idea who made it - I'm sure it's Chinese in origin - and I've had no trouble with chipping. It's heavy and the "cream" enamel on the inside is deeply stained, and it has marks from the metal spoons I use with it. I'm interested in replacing it with a larger size, not because there's anything wrong with what I've got. You mention smoothness; yep, the bottom of this cheap PD oven is not perfectly smooth. Doesn't seem to cause problems, though. I would expect the Lodge to be at least as good (though it should be better) and if it is, I'll consider it well worth $50.

To be clear, I am not at all suggesting that the Lodge is "as good" as something like a Le Creuset or Staub. I am *not* criticizing anyone for purchasing a nicer, more expensive product. I just think it's important to point out that the "better" pieces aren't functionally better at cooking. They are lighter and will almost certainly last longer, but if I have to buy a new one $50 one every 15-20 years, I'm fine with the trade-off.
I have an 8qt Instant Pot and they are not at all the same thing. It's great that you have one fewer cooking device in your kitchen - if you don't need it, that's great! I would never suggest people buy things they don't need (though this *is* SD, so...). But just because you don't do the kind of the cooking that would benefit from a dutch oven doesn't mean others don't. I have 3-4 dishes I wouldn't cook in anything *but* a dutch oven, not to mention certain breads. To each their own.

Shape affects what you can cook.
3
0
1
0
Reply
This comment has been rated as unhelpful by Slickdeals users
Joined Aug 2007
Veni. Vidi. Sumpsi.
279 Posts
197 Reputation
10-16-2020 at 06:58 AM #15
Note that there are 4 shapes of Le Creuset dutch ovens: normal, deep, wide, and oval. Deep is better for soups, wide is better for browning meats, and oval is better for taking up space on your range.

If you're like me and you use stock pots for soup, you may want to consider the Signature Wide for $50 more. It's higher quality as well. https://www.amazon.com/dp/B01BNIOU8U/
4
0
0
0
Reply
Page 1 of 2
1 2
Join the Conversation
Add a Comment

21 Advent Calendar Gift Ideas Under $25 for Every Personality

Diversify Your Portfolio With These 6 Alternative Investment Platforms

Review: Google's Nest Thermostat Smartly Manages Your Home Environment So You Don’t Have To
Copy Code & Open Site More Deals from
Did this coupon
work for you?
Copy
Link Copied to Clipboard