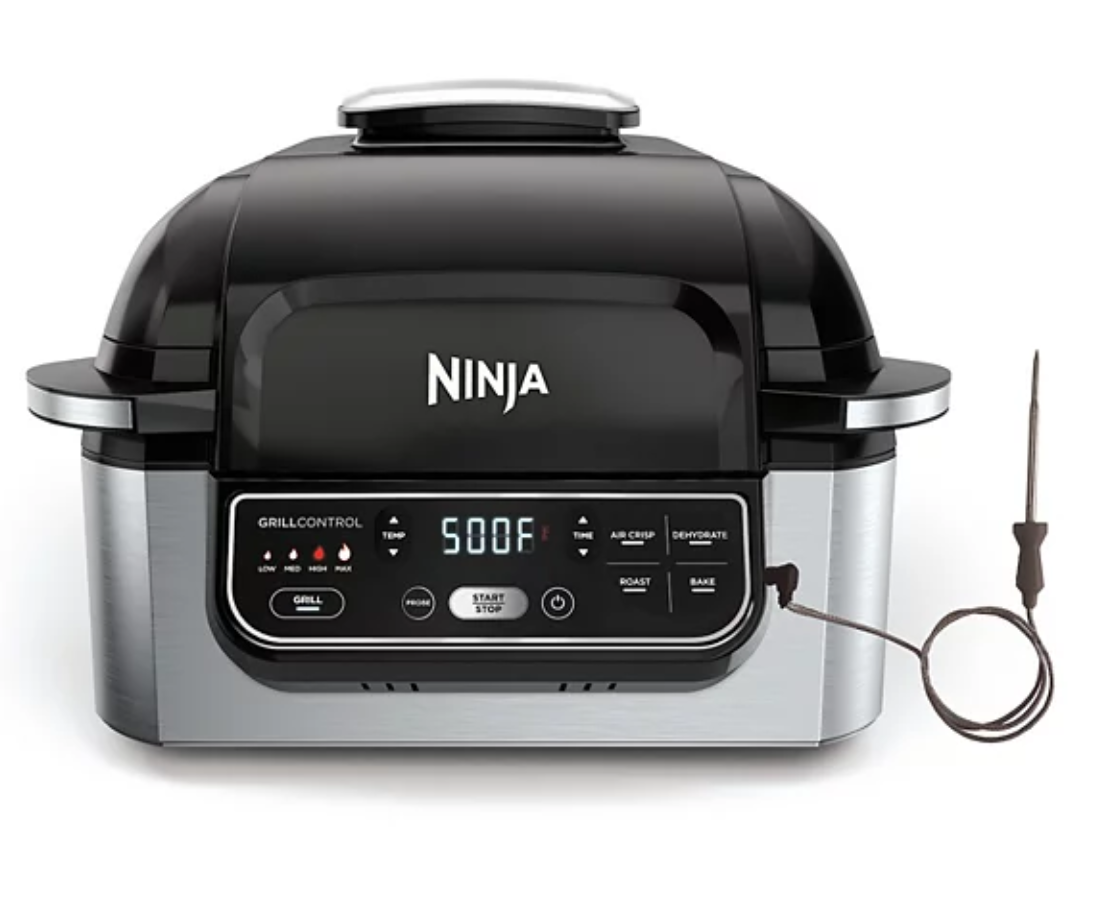 MuthuMV posted this deal. Say thanks!

Add Comment
Reply
in Grills (7) Get ninjakitchen Coupons
If you purchase something through a post on our site, Slickdeals may get a small share of the sale.
Deal
Score +57
39,435 Views
$160
$269.99
See Deal

Thanks for clarifying. I was going a little nuts every time I thought about the two models.

I wonder if they have a normal korean grill top that can be put in to a 12" cast iron pan. Off to google I go.

0
Reply
This comment has been rated as unhelpful by Slickdeals users
Joined Nov 2012
New User
11 Posts
10 Reputation
11-27-2020 at 07:59 PM #19
We got one last Christmas when the temperature probe was a pretty big price difference so we got the one without. (I think it was at least $50 more) Overall My husband loves the gadget but really wishes we had the built in thermometer. : ( He's over cooked a few steaks as it seems to cook much faster than the settings/timer. He lifts the lid to take the temp and that stops the machine. We purchased this one from the post to gift his son so he doesn't have the same issues. I have no idea how accurate it will be, but with a minimum price difference I'd recommend it!

0
Reply
This comment has been rated as unhelpful by Slickdeals users
Joined Nov 2020
New User
1 Posts
10 Reputation
11-27-2020 at 08:10 PM #21
Can anyone confirm if this can toast bread and bagels well? Thinking of replacing my toaster oven with this...

0
Reply
This comment has been rated as unhelpful by Slickdeals users
Joined Jul 2009
L6: Expert
1,232 Posts
183 Reputation
11-27-2020 at 08:22 PM #22
This one looks like it does browning a notch better than the XL. XL only seemed to do flat ribs better. Look at youtube videos that compare the two. Don't know her name, but a older chunky black woman on youtube does a great job by comparing the two.

0
Reply
This comment has been rated as unhelpful by Slickdeals users
Joined Dec 2008
L6: Expert
1,437 Posts
933 Reputation
11-27-2020 at 08:55 PM #28
I could be wrong, but looking closely at this one and the Costco model, I think they're exactly the same, just with the buttons moved around. It's all the same buttons, except one on this model that says "Probe" and one on the Costco version that says "Preset/Manual", which I suspect do the same thing.

0
Reply
This comment has been rated as unhelpful by Slickdeals users
Joined Jun 2019
L2: Beginner
25 Posts
30 Reputation
11-27-2020 at 09:00 PM #29
Out of curiosity I tried using this a couple of days ago cooking korean bbq. I set it up on my dining table and have all the meats on a side table. Set it to the highest grill option and it cooked pretty fast once it's hot. Yes, it's a little bit awkward that I had to open and close the lid but it's doable. No smoke and less smell than my old grill. The thing is I live in a small apt, not a lot of storage, so I want to maximize the function of things I have.